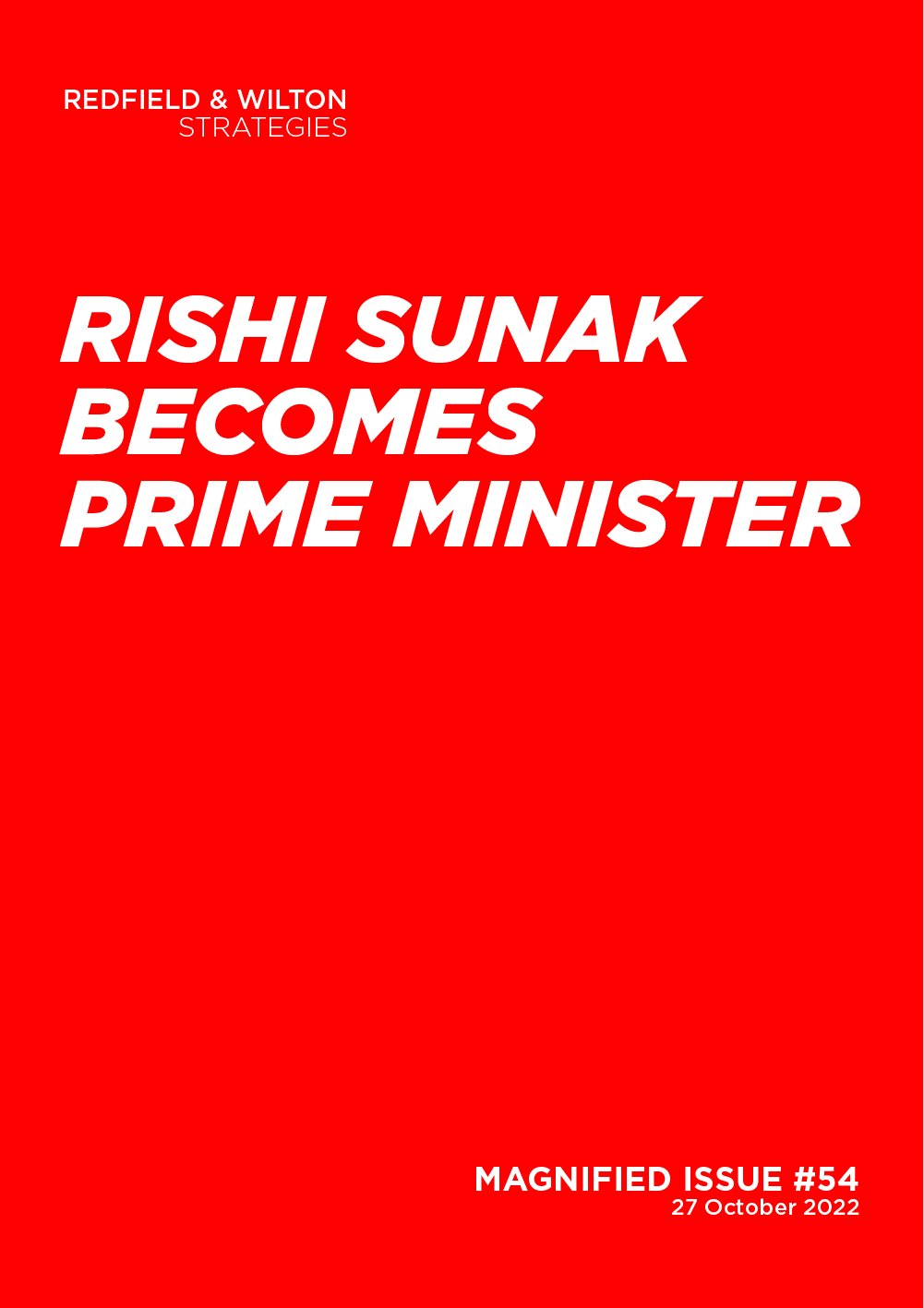 It’s time to take a look at the polls! In this week’s issue of Magnified, we respond to Rishi Sunak becoming Prime Minister.

In our first poll conducted since Rishi Sunak formally became Prime Minister, Labour leads the Conservatives by 32%, just one point lower than on our poll last Sunday, which had been conducted when it was still unclear whether Boris Johnson would be in the running for Prime Minister.

However, in our first head-to-head poll between Keir Starmer and Rishi Sunak since 4 September, when Rishi Sunak had lost to Liz Truss in the Conservative Party’s leadership contest (and when we, at Redfield & Wilton Strategies, had tragically thought that was that and stopped tracking the question), we find Rishi Sunak leading Keir Starmer by 1%.

The discrepancy between our voting intention result and our head-to-head polling question may be a consequence of how we word our head-to-head polling question. We ask respondents who they think would be the best Prime Minister for the United Kingdom at this moment—something we feel more decisively measures the public’s desire to change leader now.

With Sunak having just become PM, a number of members of the public may be willing to let the dust settle and have things calm down a bit for now…but would still vote for Labour when, eventually, they are called to the ballot box.

Looking forward, the challenge for Rishi Sunak will be to represent himself as a point of both continuity and discontinuity. In order to stave off public pressure to call a General Election and to quell any potential rebellions from within the parliamentary Conservative Party, he must portray himself as merely executing the same vision that won the Conservatives their massive majority in 2019—however hazily that vision was defined. And he must also portray himself as an agent of change, addressing what has gone wrong in the time since the 2019 election.

During the Conservative Party’s leadership contest, Liz Truss executed this duality perfectly. That contest, we wrote in August, was the public airing of a previously internal debate that had been held between then Chancellor Rishi Sunak and then Prime Minister Boris Johnson. Rishi Sunak had resigned because of the changes in economic and tax policies Boris Johnson wanted to implement. As a result, Liz Truss was able to run as both a pro-Boris Johnson candidate (i.e., continuity) and an agent of change and therefore won.

Success for Rishi Sunak will hinge, in part, on how much the public deems him to blame for the economic problems he now inherits. Last week, we found 51% of members of the public found Rishi Sunak ‘fairly’ or ‘significantly’ to blame for the UK’s present economic problems. Though far less than the 71% and 64% who apportioned the same amount of blame to Liz Truss and Kwasi Kwarteng respectively, 51% is still a high figure.

However, that may change as time goes on. Due to the interlude between Rishi Sunak’s and Boris Johnson’s premiership, the public may simply forget the role the former Chancellor has previously played in the economic policies that contribute to the present problems facing the country.

For Labour and Keir Starmer, therefore, the challenge will be the opposite: to situate Rishi Sunak as a point of both continuity and discontinuity in a different sense. They will argue that, in being a new Prime Minister appointed in the middle of a parliamentary term, Rishi Sunak is not someone whom the public ever voted for. At the same time, they must tie Sunak to the previous twelve years of Conservative governance and, in particular, to the economic missteps of the Johnson government.

In the next few weeks and months, the public’s views of Rishi Sunak will therefore depend on how well and in what way each side respectively portrays the new Prime Minister as something new or more of the same.

Has the fiscal crisis influenced attitudes towards Brexit?
UK in a Changing Europe | 27 October 2022

“The Tories betrayed us”: Britain is ready for a general election
The New Statesman | 25 October 2022

Rishi Sunak vs Keir Starmer: How do they measure up in the eyes of voters?
Sky News | 24 October 2022