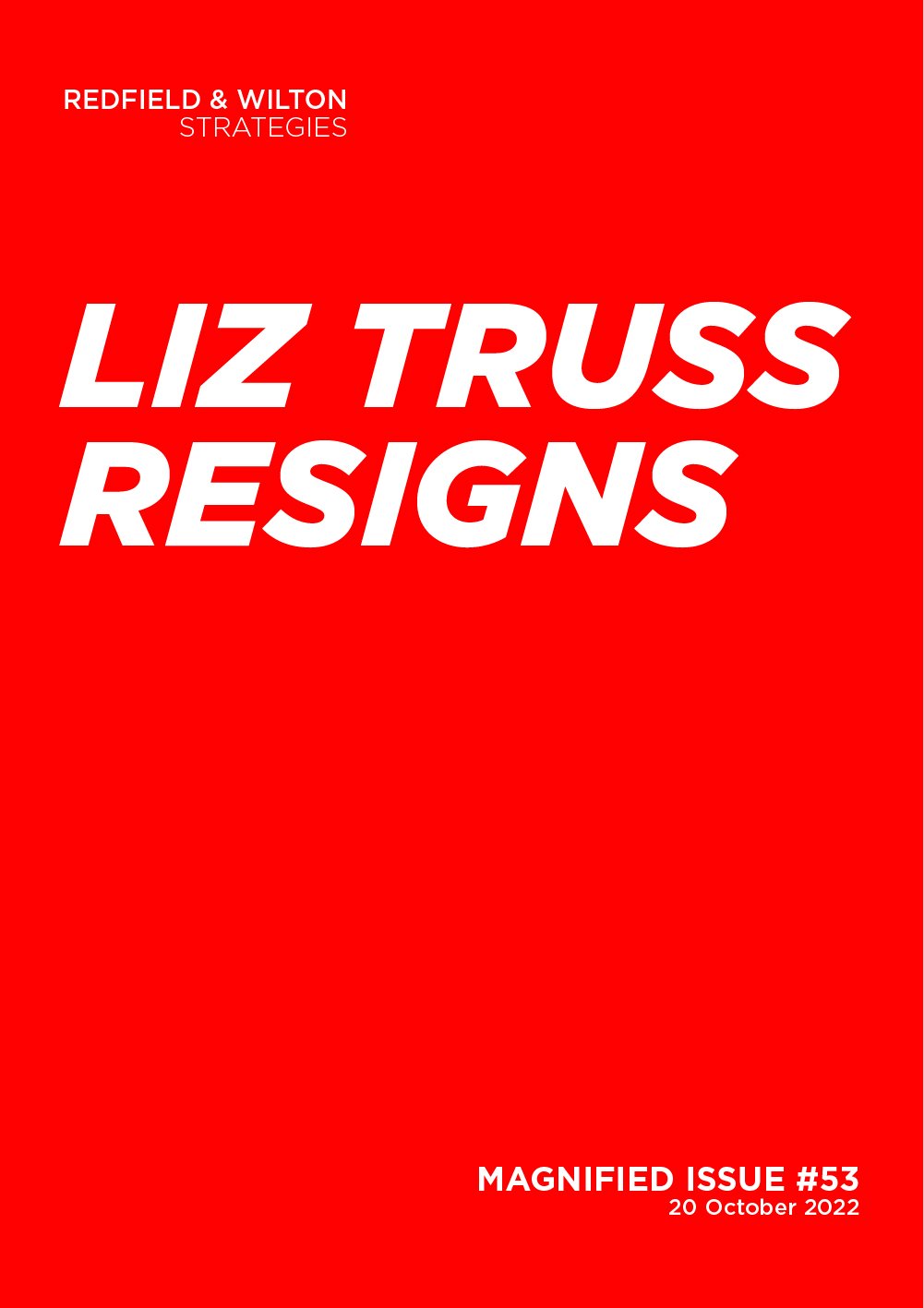 It’s time to take a look at the polls! In this week’s issue of Magnified, we respond to Liz Truss’ resignation after just 44 days as Prime Minister.

Difficult as it may be to believe from the viewpoint of today, Liz Truss was once popular—or at least not unpopular. On 18 September, a mere month ago, our polling had Truss leading Keir Starmer by 4% on the question of who would be the better Prime Minister for the United Kingdom. In fact, since the Conservative Party’s leadership contest began in earnest, Truss had consistently polled better against Keir Starmer than her rival Rishi Sunak did on the back of her promises to cut taxes and promote growth.

With a slightly positive net approval rating, Truss entered Number 10 before a British public that was mostly willing to give her a chance despite not having had a chance to vote for either her agenda or a party led specifically by her. And though she said, infamously now, that she was willing to be unpopular, the new Prime Minister likely thought that she was going to implement policies that, on the whole, would be popular.

Indeed, her proposed energy price freeze, which is estimated to likely cost far more in public spending than her proposed tax cuts, was and still is widely supported. Many of the tax cuts in her and Kwasi Kwarteng’s original “mini budget,” such as the reduction of the basic rate of income tax, the scrapping of the national insurance increase, and the doubling of the threshold of stamp duty were and still are well-liked policies. Even keeping corporation tax at 19%, though not at all a strongly supported policy, has been something the public is willing to tolerate.

Some political commentators have suggested that the cause of Liz Truss and Kwasi Kwarteng’s downfall was their ideological rigidity—extremism even—and their unwillingness to adapt to the economic beliefs held by the public. In particular, these commentators argue that Trussonomics (whatever that is) is wholly at odds with the Conservative Party’s realignment in 2019 in traditional Labour-voting areas.

Given the brashness with which they discarded senior figures of the Treasury and went ahead with a major change in fiscal policy without a forecast from the Office of Budget Responsibility, there is certainly some truth to this criticism of ideological arrogance. But the opposite criticism is perhaps more applicable in this case.

Truss tried too hard to appease the public’s various contradicting demands. The public has consistently said in our polling that taxes are too high. With taxes on the public at their highest level in decades, amidst a cost-of-living crisis, this widespread opinion is understandable, and so Liz Truss provided tax cuts. At the same time, while the public will readily recognise that the Government is spending too much in general, proposed spending cuts on specific programmes are unpopular—and so Liz Truss stated that there would be no spending cuts.

The public’s steadfast enthusiasms for the United Kingdom’s support to Ukraine or for net zero climate change policies has hardly wavered, even as energy bills have skyrocketed across the country. As a result, there has been little to no pressure, on the part of the UK, to bring Ukraine and Russia to the negotiating table. Instead, Liz Truss announced and implemented a risky, exorbitantly expensive energy price freeze.

At every critical juncture, whether on cutting spending or addressing rising energy bills, Liz Truss avoided making the hard decisions that a statesman, not the public themselves, has to make in the face of reality. Worse still, she never communicated to the public the trade-offs that needed to be made in order to achieve her—and the public’s—priorities.

In the end, it was the bond market that exposed Truss’ cake-ism. Without that heavy dose of reality, however, Truss might have actually still been popular today.