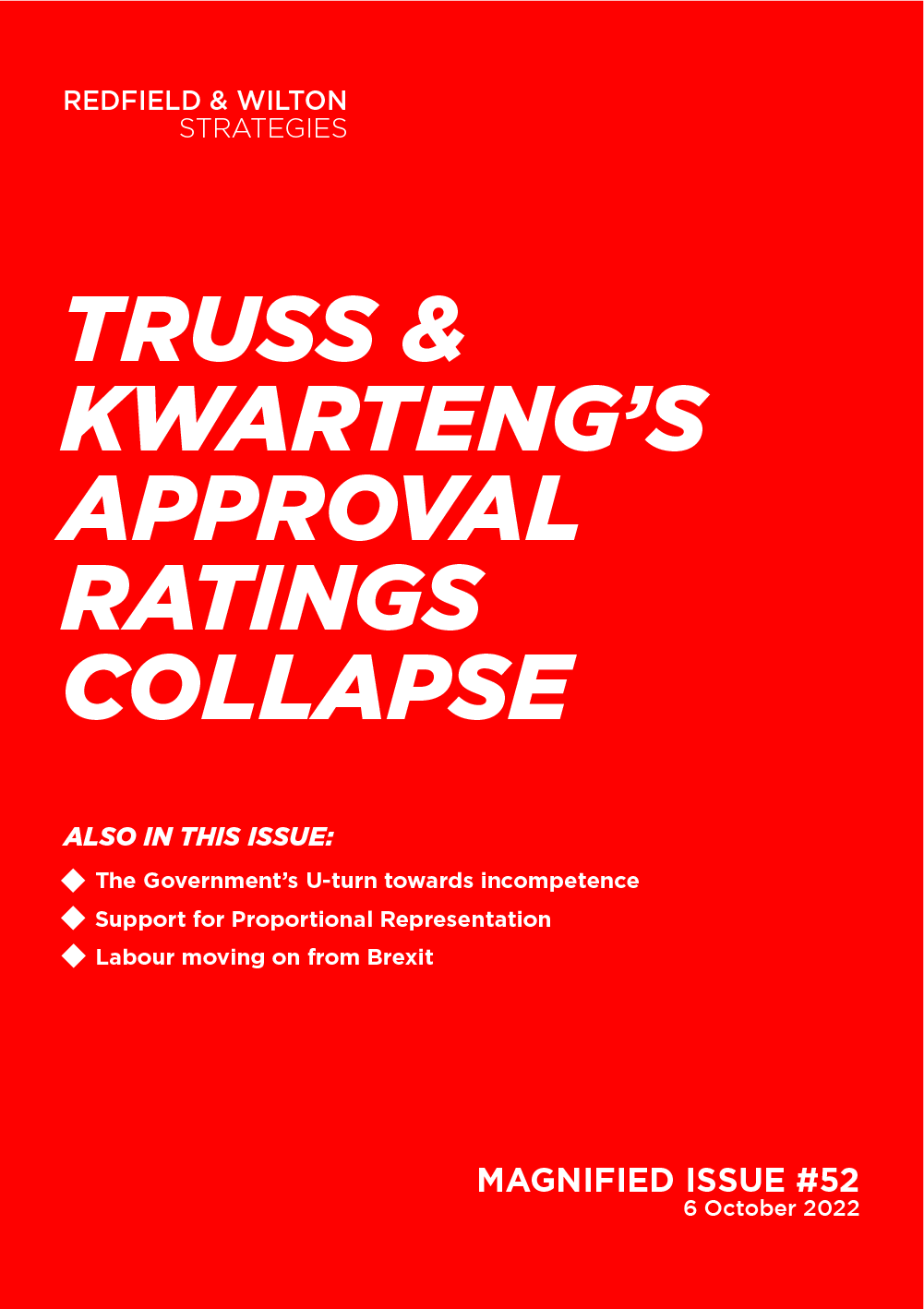 It’s time to take a look at the polls! In this week’s issue of Magnified, we take an in-depth look at the abysmal latest polling for Liz Truss & Kwasi Kwarteng.

After months in which the Conservatives’ voting intention results had never dropped below 30%, even during the worst of Boris Johnson’s scandals, we wrote in Magnified two weeks ago that it appeared that the Conservatives’ support had reached its floor.

Noting that the Government’s net competency rating was approaching what it was before the party-gate scandal, we even had the temerity to write that in changing their Prime Minister, the Conservatives had sort of hit the reset button—though they still had a long way to go.

How suddenly things can change in politics.

Little did we know, the floor of 30% support that the Conservatives stood upon had become so structurally unsound that any too sudden, too strong, too injudicious of a movement could precipitate its collapse.

Liz Truss and Kwasi Kwarteng had to walk a very fine line, a precarious path, in order to rebuild trust for the Conservative Party after Johnson. Instead, they made a run for it with a poorly executed mini budget, and the floor gave way.

In our two virtually identical voting intention results this week, the Labour Party leads by an astonishing 28%, up from 17%. Only half of those who voted Conservative in 2019 (52% in yesterday’s poll, 47% on Sunday) say they would vote Conservative again in a General Election. Somewhere around a fifth to a quarter (20% on Sunday, 23% yesterday), meanwhile, say they would switch their vote to Labour.

If these two poll results were replicated in a General Election, the Labour Party would easily win by a landslide. All the historically Labour seats that the Conservatives won in 2019 would revert back to Labour (our polling finds Labour leading by 38% in these constituencies), and then some more, many more.

Above all, the public standing of Truss and Kwarteng has collapsed entirely. Both of their approval ratings now stand at -44%, far worse than any approval rating that we had recorded for their predecessors Johnson and Sunak. Among those who voted Conservative in 2019, Liz Truss’ approval rating stands at -24%. Kwasi Kwarteng’s is even worse, at -39%. Dire figures.

While Truss & Kwarteng have certainly shot themselves in the feet and now poll worse than Johnson & Sunak ever did, it is important to note that their problems are not entirely attributable to their mini budget. Before Truss became Prime Minister in September, more than 60% of Britons said their financial position had worsened in the previous months.

At the beginning of this year, 1 British pound was worth 1.35 US dollars. When Liz Truss became Prime Minister on 6 September, it was worth 1.16 US dollars.

When all voters (even the 8% who think the economy is in a good state) are asked who they deem most responsible for the current state of the UK economy, voters lean slightly more to Johnson & Sunak than to Truss & Kwarteng (40% to 34%).

Supporters of former Chancellor and Conservative Party leadership contender Rishi Sunak, who himself stayed away from this week’s conference in Birmingham, may think the Party Membership merely made the wrong choice in leader. They place the blame for this collapse in the Conservative Party’s support on Truss and Kwarteng. But the results to the latter two questions suggest that the Conservative Party’s problems are deeper and have been for a long time coming.

Two weeks ago, the percentage of Britons saying the UK Government was incompetent had dropped to 42%, approaching what it was before the ‘party-gate’ scandal began in early December last year. In the space of two weeks, this figure is fast approaching its worst ever under Boris Johnson. Quite a U-turn, that one.

OUR TAKE: The Labour Party conference backed a motion in support of changing the UK’s electoral system from first-past-the-post to one of proportional representation. Even in the electorally salient ‘Red Wall’ seats that the Conservatives won in the 2019 election (i.e., where voters have significant influence), support for PR is strong. 43% would support a switch to proportional representation, while just 12% would oppose.

OUR TAKE: Keir Starmer, former Shadow Secretary State for Exiting the European Union, who once strongly supported a second referendum, acknowledged Leave voters’ cry “for economic change” and their desire for “democratic control over their lives.” Even as a majority of the public would vote to re-join the EU if there were a referendum today, this decision to let Brexit lie is a wise one. When asked whether Labour should campaign to join the EU, 43% of the public say no, compared to 37% who say yes.