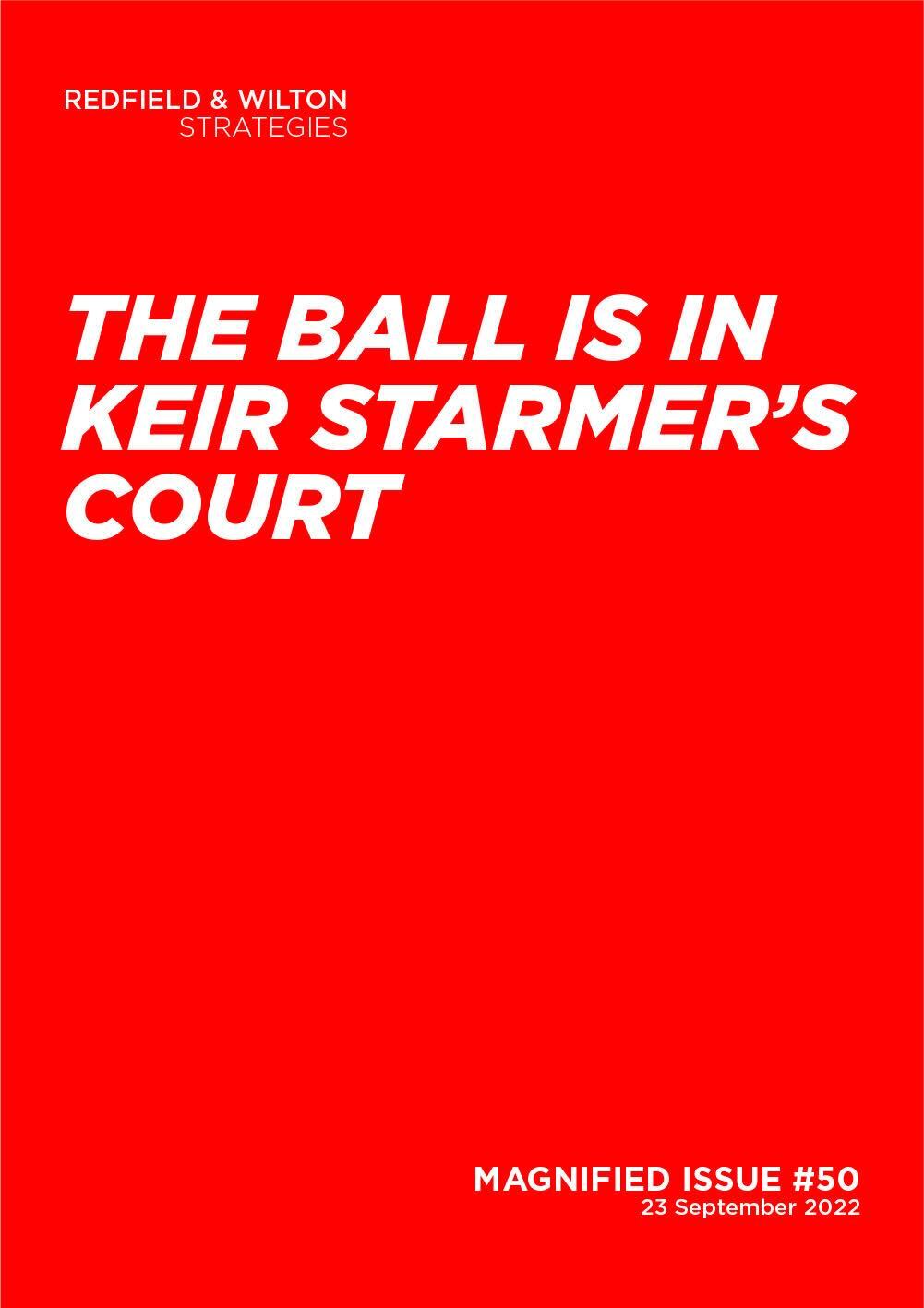 It’s time to take a look at the polls! In this week’s issue of Magnified, we take an in-depth look at what Liz Truss becoming Prime Minister means for Keir Starmer and the Labour Party.

But first, we’re hiring! Do you have research and/or political experience? Do you want to do interesting work similar to what you see in Magnified? Apply here.

Following the death and funeral of Queen Elizabeth, politics has resumed in the United Kingdom. Labour, as before, stands at around 42% in our voting intention polling and the Conservatives continue to fluctuate around 30% to 34%. Labour’s lead over the Conservatives therefore remains formidable. At the same time, Liz Truss continues to lead Keir Starmer for better Prime Minister of the UK at this moment (40% to 35%).

These two results are not, however, as contradictory as they may initially appear. With Liz Truss having only just become Prime Minister, some members of the public may feel it is best that she is given a fair chance in her new role and therefore see her as the better option for Prime Minister for the time being. With a modest approval rating of +4% (though, to be sure, 41% of respondents are neutral or undecided), Truss certainly has a bit of a grace period during which she has a chance to impress the public with her policies.

How long this grace period will last is unknown.

Eventually, Truss’ head-to-head polling will become indicative of whether the public has turned against her. Starmer has polled ahead of Truss in the past and very easily can again.  Movement away from Truss in this area would be the first indicator of the public’s impatience or disappointment.

The Conservatives’ voting intention polling, meanwhile, appears to have hit its floor (barring a challenge from a UKIP/Brexit Party-style insurgent party). Therefore, if, on the other hand, the public truly takes to Truss, expect the Conservatives to improve in this area.

In the weeks following Boris Johnson’s resignation, the percentage of Britons saying they viewed the current Government as ‘incompetent’ reached its highest level recorded (almost 60%!) during Boris Johnson’s premiership. Such was the frustration of the typical British voter.

With the recent change in leadership, views of the Government have quickly taken a noticeable turn for the better, approaching what it was before the Owen Paterson and party-gate scandals paralysed what was then already an agenda-less government. In short, the Conservatives have sort of hit a reset button, reducing the lack of confidence in the Government by almost a third of its recent peak.

That said, there’s still a long way to go for Prime Minister Liz Truss. Twice as many respondents view the current Government as incompetent rather than competent. The only period during Boris Johnson’s time where more respondents found the Government to be competent than otherwise was, fleetingly, during the coronavirus vaccine rollout, a rare clearcut case of successful policymaking. Can such a success be repeated again?

The Ball is in Keir Starmer’s Court

For the first two-plus years of Keir Starmer’s time as Leader of the Opposition, the answer to these two questions would not have been much. Throughout the coronavirus pandemic, the issue which overwhelmed the United Kingdom for much of 2020 and 2021, Starmer and his Labour Party abstained from numerous votes regarding restrictions and rarely, if ever, voted against the Government.

On Brexit, the issue which determined how most voters voted at the last General Election, Starmer has said that he now intends to ‘make Brexit work,’ and he is adamant that the United Kingdom will not be re-joining the EU, or even the single market, anytime soon.

For the first several months of this year, after the pandemic and Brexit had subsided, Starmer particularly narrowed in on the party-gate scandal, hammering in on the personal character failings—not, critically, the policy failings—of former Prime Minister Boris Johnson.

In fact, on numerous occasions, Starmer and his Party have had little ideological need to oppose the policies of the Government, ranging from the Government’s embrace of climate change policies during COP26 and large immigration numbers to record spending on the NHS and the adoption of a windfall tax on energy companies. With such policies, what really what really is Labour supposed to offer voters except, of course, more integrity and perhaps greater earnestness in implementation?

Yet, for the duration of Boris Johnson’s time as Prime Minister, Keir Starmer benefitted from being an unknown entity, forcing the public’s focus to fall on a floundering Boris Johnson. In July, just one week after Boris Johnson had resigned, 61% of Britons said they were ‘not at all’ or only ‘slightly’ familiar with Keir Starmer and what he stood for, a figure that had been virtually unchanged since February (59%). Concurrently, Labour was—and still is—consistently racking up double digit leads over the Conservatives in our voting intention polling.

Even now, when voters are asked to say in their own words what they think the Labour Party stands for under Keir Starmer, one of the most common responses is something along the lines of ‘don’t know,’ ‘not a clue,’ ‘unsure,’ ‘no idea,’ and even ‘nothing.’ Those who do provide a positive, substantive answer do not typically refer to policy. Rather, such voters cite qualities such as ‘fairness,’ ‘equality,’ ‘respect,’ and ‘people.’

Though comparisons to the United States can at times be overly simplistic, Starmer has taken advantage of a similar strategy Joe Biden applied in the 2020 Presidential Election. In that election, the American public seldom dwelt on Biden’s policy platform, and Biden took little to no effort to draw attention to it. Instead, Biden’s low profile on policy made the presidential contest significantly about character, specifically Donald Trump’s. Here in the United Kingdom, Starmer has done much the same with Boris Johnson.

But such posturing must end now for Starmer. In Liz Truss, Starmer faces someone with an actual policy agenda, and an identifiably conservative one at that. Liz Truss knows, quite clearly, where she stands, and she is succeeding at making the public also know where she stands.

Readers of Magnified will recall that, in February, as many as 53% voters associated the Conservatives with raising taxes. A mere 15% associated the historically low-tax party with lowering taxes. As of Wednesday, just two weeks into Liz Truss’ premiership, a narrow plurality of British voters now associates (35%) the Conservative Party with lowering, rather than raising (33%), taxes—a remarkable reversal that looks likely to continue given today’s mini-budget.

Before we know whether Truss’ economic policies are a success or a failure in the two years until the next General Election, Starmer must respond. He must outline, however hazily, what he would do otherwise and stake a position—unfamiliar territory for Starmer in his time as Leader of the Labour Party.

For once, the Conservatives have put the ball in Keir Starmer’s court. How will he manage?

Queen Elizabeth’s funeral: For one day, the nation stood still
The BBC | 20 September 2022

OUR TAKE: The death of Queen Elizabeth II has been a momentous event in Britain. An enormously high percentage of the public say they have heard or read a ‘significant’ (79%) or ‘fair’ (12%) amount (91% total) about this event, a figure which has only been equalled this year by the cost-of-living crisis (92% on some occasions).

OUR TAKE: Presidents Joe Biden and Emmanuel Macron visited London on Monday this week in order to attend the Queen’s funeral. This visit at a time of national mourning has improved the British public’s perceptions of these figures. Biden’s favourability among the British public, as of Wednesday, stands at +14%, up from +1% in June. While Macron’s favourability has emerged from negative territory, now at +7%, having stood at -13% in June.