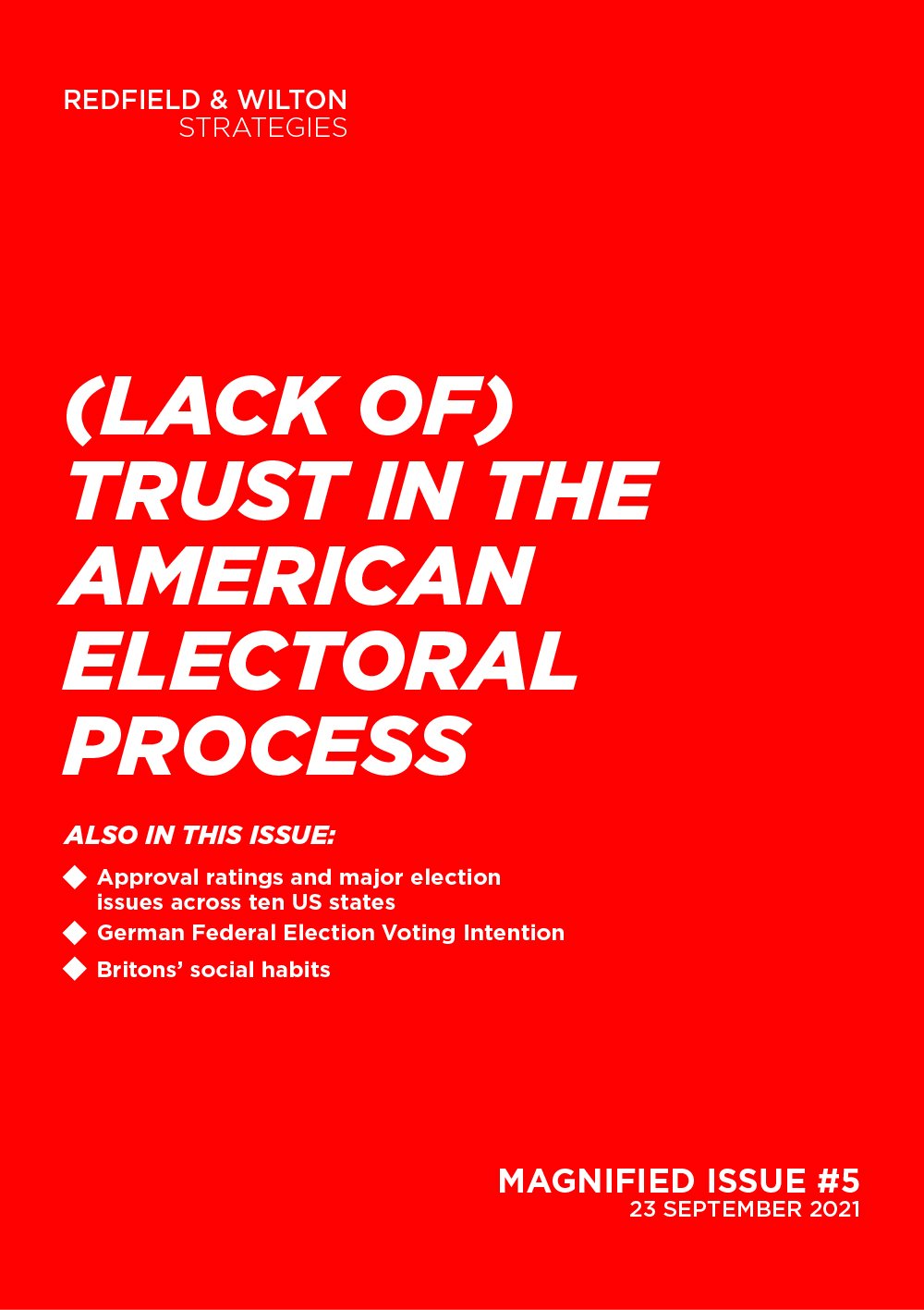 It’s time to take a look at the polls! Each week, Magnified delivers insights and analysis straight to your inbox, allowing you to stay up to date on what the public thinks about the most important issues of the day. Keep reading for the latest updates on our weekly trackers, as well as our national and international polls. Today, we also take an in-depth look at how trust in the integrity of the electoral process in the United States has changed among American voters—and what this shift means for the Republican Party in particular.

Our latest Voting Intention poll gives the Conservatives a six-point lead over Labour, with 41% (+2) of voters saying they would vote for the Conservative Party if an election were to be held tomorrow.

However, Prime Minister Boris Johnson’s net approval rating stands at -5%, while his government’s net competency rating is at -13% this week. Approval for the Government is only positive regarding the coronavirus pandemic (+8%), defence (+4%), and the economy (+1%). Areas such as the NHS (-6%), Crime/Policing (-11%), Housing (-17%), and Immigration (-24%) see notably negative net approval rates.

Yet, what of the alternatives?

Keir Starmer’s net approval rating remains in the negative double digits, now standing at -16%. While Starmer enjoyed a positive net approval rating of +21% when we first began asking Britons about his overall job performance as Leader of the Labour Party in June 2020, it has been on a continuous downward trajectory since and has not been positive since May 2021.

Britons therefore consistently see Boris Johnson as better suited to being Prime Minister than Keir Starmer. To this point, Johnson receives higher ratings than Starmer for several key leadership characteristics, such as ‘can build a strong economy’ (42% to 28%), ‘knows how to get things done’ (41% to 26%), ‘can tackle the coronavirus pandemic’ (40% to 26%), and ‘stands up for the interests of the United Kingdom’ (42% to 31%).

In his defence, Starmer may argue that the coronavirus pandemic has placed politics on pause and has taken away the opportunity to draw attention to his platform. Indeed, a quarter of respondents to our polling say a news story regarding the coronavirus pandemic most caught their attention in the past week—more than any other issue. At the same time, critics may argue that Starmer should have provided a more compelling case that the Labour Party would have responded better to the most significant public crisis of the day.

At the Labour Party conference, which begins this weekend, the chance is there for Starmer to seize the initiative and reinvigorate his leadership—or to lose it altogether.

Great Britain: 22% of Britons have not seen any friends or family members in person in the past week. While this figure has decreased thirty points from 52% since the height of the coronavirus pandemic in January 2021, in-person interactions with friends and family members remain limited for many. Read more about Britons’ recent social habits here.

Great Britain: The Bank of England is currently exploring the introduction of a Central Bank Digital Currency (CBDC)—dubbed ‘Britcoin’—in the UK. Yet only a quarter (26%) of Britons would support the introduction of such a digital currency. Read more about British public opinion on ‘Britcoin’ here.

United States: Whereas 2020 Joe Biden voters select healthcare as the issue most likely to determine how they will vote in future elections, 2020 Donald Trump voters instead say the areas of immigration, Government spending, and unemployment and wages will be most determinative in how they vote. Read more about Americans’ views on major election issues here.

A Problem of Trust: How a Lack of Trust in the Integrity of the American Electoral Process Among Republican Voters Could Become Problematic for the GOP

A Fundamental Reversal in Opinion

The impact the 2020 Presidential Election and Donald Trump’s allegations of fraud have had on trust in the American electoral process among Republican voters is difficult to overstate. Prior to the 2020 Election, our polling found Donald Trump voters consistently displaying higher levels of trust in the integrity of the electoral process in the United States than Joe Biden voters did—the opposite of the current state of views among voters of both candidates.

Of course, this reversal of trust levels may, in part, merely reflect respective satisfaction and dissatisfaction with the outcome of the 2020 Presidential Election. Even so, the unprecedented logistical challenges faced during the election, in which millions of Americans opted to vote by mail due to the ongoing coronavirus pandemic, and the ensuing allegations of electoral fraud made by Donald Trump himself and his allies following his defeat in 2020 have clearly played a decisive role in influencing public opinion among Republican voters on the issue of election integrity.

Indeed, our research shows that 69% of 2020 Trump voters agree that the Presidential Election was rigged/stolen, including 42% who strongly agree. 61%, meanwhile, disagree that the election was largely free of electoral fraud.

Dilemmas for the GOP

For the GOP, the significant lack of trust among its voters in the integrity of the electoral process places the Party at a major crossroads going forward. Election integrity and voting reform has now become one of the foremost issues for those who voted for Donald Trump in 2020: 45% of Trump voters say a candidate’s stance on voting/electoral reform policies is ‘extremely important’ to them in how they will vote in the next election—a figure that roughly equals that of a candidate’s stances on taxes (46%) and healthcare (44%) and is only surpassed by those regarding immigration (59%) and policing and crime (53%). The issue simply cannot be ignored or cast aside.

At the same time, approaching the issue of election integrity in the wrong way could invite serious problems. First and foremost, the Republican Party risks defeatism among its own supporters: when voters believe the system is rigged against them, they can become demotivated and ultimately view voting itself as futile.

Indeed, our polling finds that among 2020 Donald Trump voters who think the 2020 Presidential Election was stolen, a fifth (19%) says that this belief makes them less interested in voting in the next Presidential Election in 2024. If even just a proportion of these voters decide not to turn out at the next election, the consequences for the Republican Party will likely mean another election loss. Remember, both the 2016 and the 2020 Elections were decided by a margin of less than 1% across three critical states (2020: Arizona, Georgia, and Wisconsin. 2016: Michigan, Pennsylvania, and Wisconsin).

That 58% of 2020 Trump voters who believe the election was stolen say they are now more interested in voting in the next Presidential Election in 2024 is certainly remarkable, but ultimately matters little. Even if a Republican voter casts their ballot with twice as much determination in 2024, their vote will still only count for one vote. Any vote lost, meanwhile, will be difficult to compensate for.

Second, the act of standing in an election itself may be interpreted as contradictory to the GOP’s central argument that the elections are rigged. After all, if you as a candidate say that the electoral system is broken, then why are you running in the first place?

Any candidate who includes election integrity in their campaign platform must therefore simultaneously argue that the electoral process is broken and needs fixing and that elections can nevertheless still be won in this environment—no small task.

Third, the Republican Party risks repeatedly reigniting a debate it has already lost in the public sphere. Every effort to contest the result of the 2020 Election has failed. To fight the same losing battle again and again risks pigeonholing the Party as unwilling to move forward and unable to nurse its grievances. In California’s recent Gubernatorial Recall Election, for instance, now defeated Republican contestant Larry Elder claimed he had “detected fraud” in the election’s result—well before the polls closed and results showing a heavy defeat were announced. Such continued allegations make it difficult for the Republican Party to counter portrayals of the Party’s candidates as sore losers, conspiracy theorists, or anti-democratic in their beliefs.

Fourth, and finally, Republicans could lose out on some of the genuine advantages to mail in voting. Our polling roughly two weeks before the election on 17-18 October 2020 found that more than half of those who were voting by mail for Joe Biden said they had already sent their ballot to their county’s Board of Elections. This early vote among their supporters allowed the Democrats to fine-tune their turnout operations during the last weeks of the elections and focus resources on swing voters. Republicans, on the other hand, still had to ensure many of their regular supporters were going to turn out for them, putting them at a disadvantage.

Addressing its supporters’ lack of trust in the electoral process in the right way will require the Republican Party to consider all four of these potential problems. The key for the GOP will be to develop a forward-looking, optimistic approach to electoral reform—one that is framed as pro-democracy and that addresses the issue head on but still looks beyond the grievances of the 2020 Election and appeals to a wider array of voters, including those who do not believe the election was stolen. Such an approach will reverse a presently disorganised and divisive position and put the Party on the front foot as it prepares for 2022 and ultimately 2024.

Our take: Scottish First Minister Nicola Sturgeon once again made the case for Scottish independence and a second referendum at the SNP’s annual conference. Her comments come only about two weeks after Scotland Secretary Alister Jack said that a second referendum on Scottish independence could take place if polling consistently showed 60% of Scots wanting one. According to our latest results, however, this bar could be difficult to meet for pro-independence forces. Currently, 34% of Scots would support a Scottish referendum on independence being held in the next year, while 50% would oppose and 14% would neither support nor oppose it. Read more here.

Our take: With this week’s Federal Election in Germany, Angela Merkel’s 16 years as German Chancellor will come to an end. Overall, we find that Merkel leaves office with her reputation intact—she currently enjoys a positive net approval rating of +25%. Even so, Germans give their overall Government a negative net competency rating of -15%, suggesting disapproval with its actions in certain policy areas. Our polling shows that immigration, the environment, and housing are areas of pronounced discontent. Moreover, the CDU’s nominee to succeed Merkel, Armin Laschet, is remarkably unpopular—only 13% of Germans would like to see him as the country’s next Chancellor. Overall, Merkel herself may still be held in high esteem by German voters, but whether her political legacy will be carried on thus looks much less certain. Read more about Germans’ views on the upcoming Federal Election here.

The EU is fighting for control over cryptos. Citizens may see it as a potential ‘a power grab’
Euronews | 1 September 2021