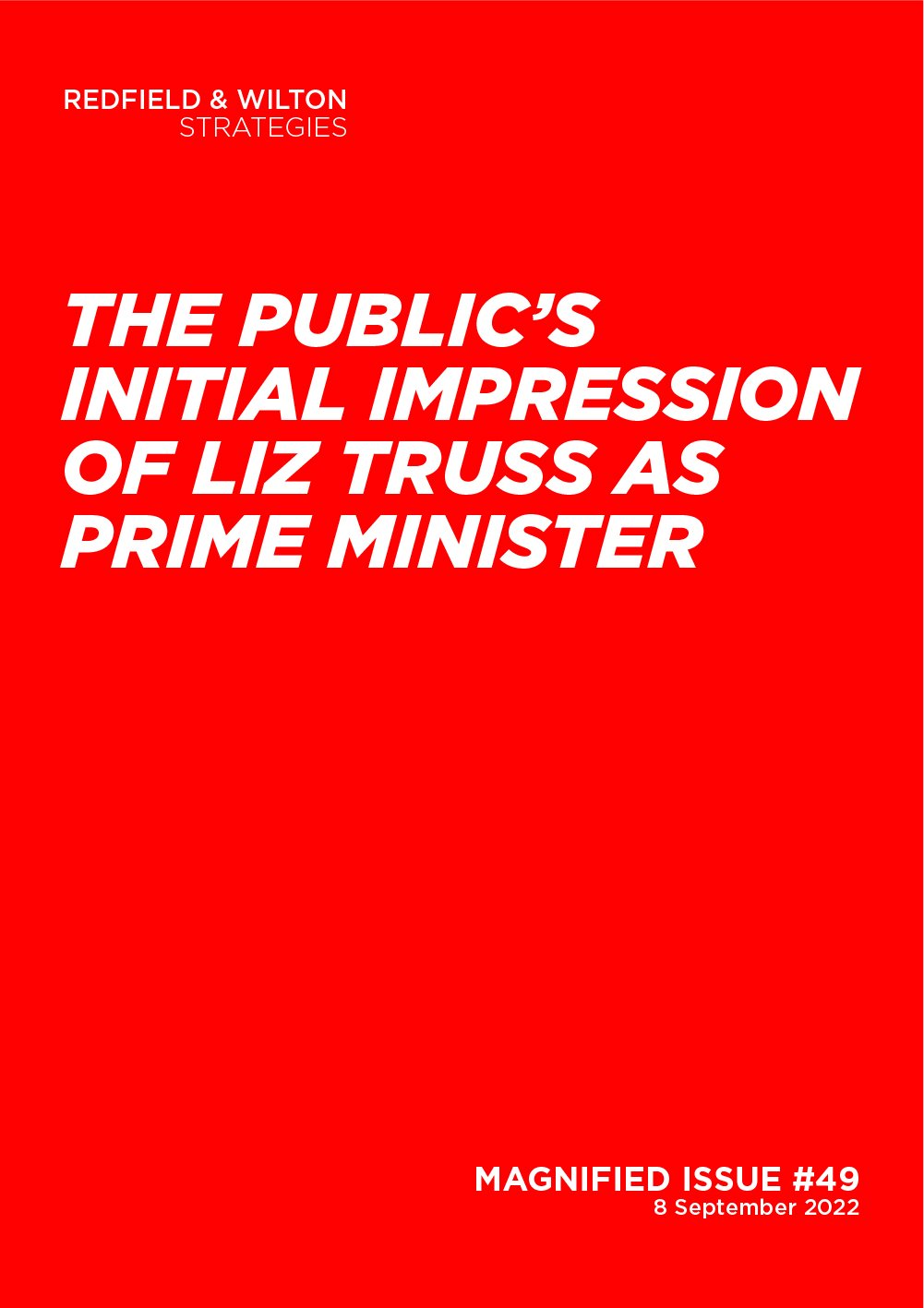 It’s time to take a look at the polls! With reports of the Queen’s declining health, our Magnified email this week will be a brief look at our first polling conducted since Liz Truss became Prime Minister.

In our first poll since Liz Truss became Prime Minister, the Labour Party maintains its 12-point lead over the Conservatives, the joint-highest lead for Labour that we’ve recorded. However, perhaps in part due to a willingness to see how she will fare, Truss has reclaimed a marginal 2% lead in head-to-head polling against Labour Leader Keir Starmer for better PM of the UK.

So far, the majority of voters have yet to make up their mind on their new Prime Minister. 54% of voters say they are neutral or undecided about her performance thus far, suggesting that her opening speech on Tuesday and yesterday’s PMQs have not yet swung the electorate in one direction or another. Her net approval stands at a narrow -1%.

How Liz Truss fares will depend largely on how well she navigates the country through the difficult months ahead. Illustrative of the urgency of the problem, an astonishing 78% of voters say they are ‘very’ or ‘fairly’ concerned (as opposed to only ‘somewhat’ or ‘not at all’ concerned) about their ability to pay their energy bills this winter, up from 63% who said so only two weeks ago.

The scale of Government intervention to help alleviate the worst effects of increasing energy prices and how those interventions are to be paid for will be a key dividing line between the Conservatives and Labour. As such, yesterday’s first encounter between Truss and Starmer at Prime Ministers Question’s was instructive, as it illuminated a key ideological difference between the two on tax, building on a similar, previously internal debate within the Government that came to the fore during the Conservative Party’s leadership contest.

Starmer’s very first question to Truss concerned her stated opposition to windfall taxes. The Labour leader has made the case in recent weeks that a windfall tax on the “vast excessive profits” of energy companies is necessary to fund his proposed energy price cap freeze. In response, the Prime Minister again affirmed her opposition to a windfall tax, warning such a tax risked “putting companies off investing in the United Kingdom, just when we need to be growing the economy.”

From there, the dividing line was drawn, and the remainder of the session consisted of Starmer attacking “the Tory fantasy of trickle-down economics,” and Truss casting Starmer as a Labour leader of the old school, calling for “the same old, same old tax and spend.”

As of two weeks ago, this situation has not dramatically changed despite the Conservative leadership contest’s vigorous debate on taxation. Polling conducted on 24 August found 41% of the public associating the Conservatives with raising taxes while half as many (20%) associated the party with lowering taxes. Meanwhile, 28% on 24 August associated Labour with raising taxes against 23% who associated the party with lowering taxes.

These figures represent, roughly, the starting point for Liz Truss and Keir Starmer ahead of their coming ideological debates over tax policy. We will be watching to see whether and how quickly the public will internalise the differences revealed in yesterday’s PMQs.

Fascinatingly, our polling on 24 August had found that Labour voters, not Conservative voters, were most likely to say that the Government should lower taxes. In recent years, we have consistently found that younger voters especially want lower taxes (and lower spending), which makes it more all the interesting that Starmer is willing to risk being associated with higher taxation.

If Liz Truss is able to successfully lower taxes such that her government would not have to be raising taxes soon thereafter, the Labour Party will be put in a difficult position of having to answer questions regarding whether they themselves would raise taxes. For the time being, however, the public still largely thinks Truss’ party is a party for high taxes.

‘Pot, kettle, prat’: are our politicians too ‘out of touch’ to deal with the cost-of-living crisis?
The Week | 2 September 2022