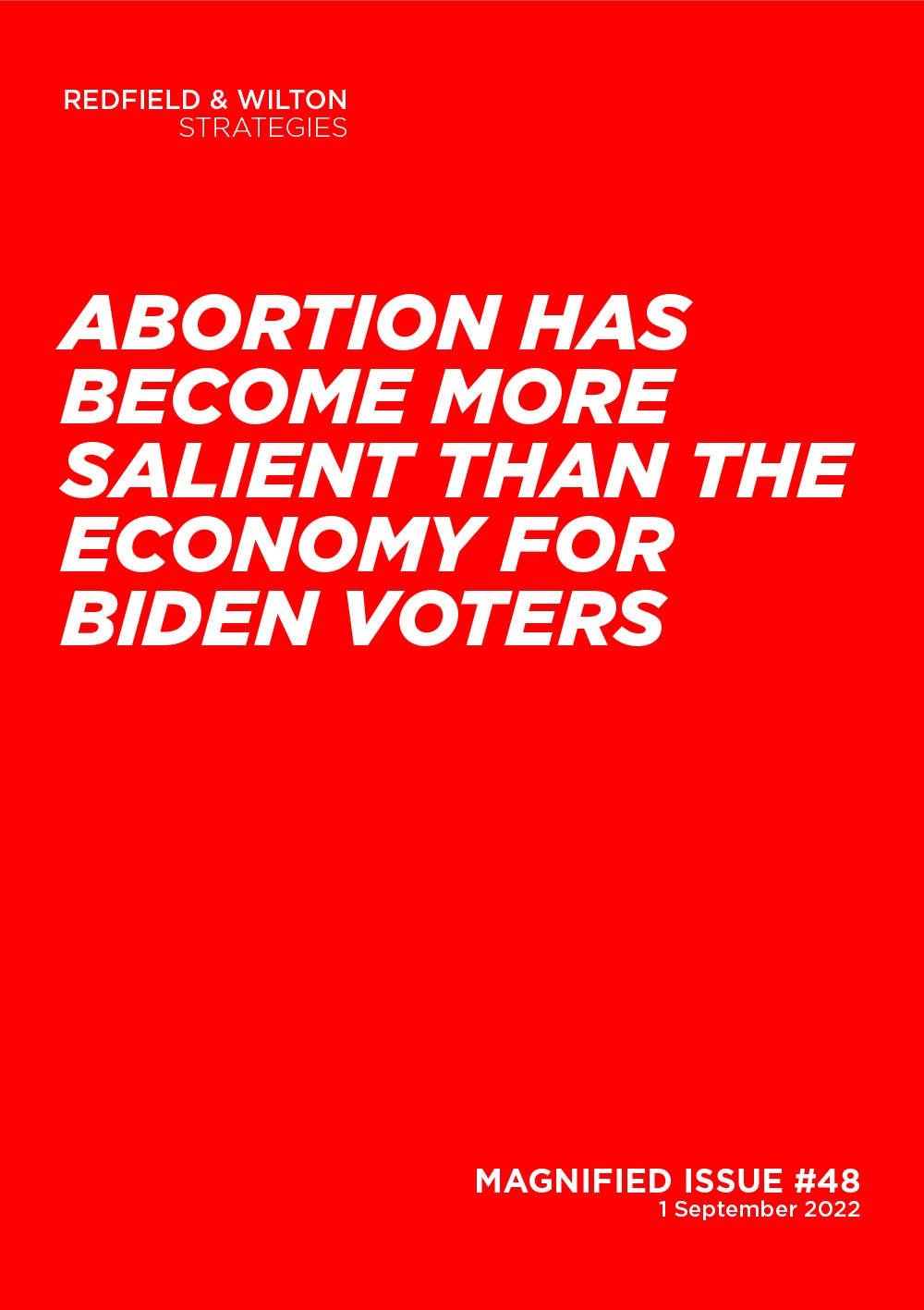 It’s time to take a look at the polls! In this week’s issue of Magnified, we highlight our chart of the week, which demonstrates the extent to which abortion has surged to become the most important issue for Democratic voters heading into November’s elections.

On Monday next week, the United Kingdom will have a new Prime Minister, widely expected to be Liz Truss. While we have not polled members of the Conservative Party, it is true that Liz Truss has consistently led in our polling among those who voted Conservative in 2019 since the start of the leadership contest (albeit never by a truly sizeable margin; yesterday’s poll, for instance, finds her leading Sunak 46% to 35% among 2019 Conservative voters).

Truss will take the helm of a country and a political party both in troubled states. 69% of Britons rate their level of trust in the current UK Government at a 0 or 1 on a scale of 0 to 3. More than 50% of the public disapproves of the outgoing Government’s performance on immigration, the economy, and the NHS, while the Government has further significantly negative net approval ratings on housing, crime/policing, the environment, education, and foreign policy.

That said, Truss and those rumoured to form part of her cabinet, such as Kwasi Kwarteng, Suella Braverman, and James Cleverly, will also be starting from a clean slate in the sense that the public is unfamiliar with them. Strong majorities of the public say they have not seen or heard enough of these individuals to have made a fair judgment of them.

Even Truss herself was more unknown than known to the public at the start of the leadership contest. While the public has no doubt heard much from her in the last few weeks, they are still yet to see her in action and to see the results of her proposed policies, providing an opening to create a strong first impression.

Above all, the public has yet to warm up to her opponent, Leader of the Labour Party Keir Starmer. While Labour has led in every single one of our Westminster voting intention polls this year, with our latest poll finding Labour ahead by 11%, approaching the largest lead we have recorded for them, Starmer himself has not once had a solidly positive net approval rating. His three most recent net approval ratings have been: -5%, -6%, and -5%.

In the early weeks of the leadership contest, without yet having become Prime Minister, Liz Truss was able to establish a narrow lead in head-to-head polling against Keir Starmer for better Prime Minister for the UK. As the contest stretched on, Starmer regained a lead (now at 39% to 35%), but such fluctuations demonstrate how easily the polling picture can improve for the Conservatives under Liz Truss.

However, with energy bills for Britons soon to rise to £3,549 per year in October, events may be running too far ahead of Truss for her new Government to chart a new course for her country and party. Will she be able to rise to the occasion?

For the first time in our polling in the United States, those who voted for Joe Biden in 2020 are now more likely to say that abortion (61%) rather than the economy (50%) will be one of the three issues that will most determine how they will vote in the November 2022 elections. Among those who are registered with the Democratic Party, the difference is narrower, but abortion still ranks ahead (53%) of the economy (51%).

By comparison, only 22% of those who voted for Donald Trump in 2020 cite abortion as one of the three issues that will most determine how they will vote in the 2022 elections, putting it well below the economy (68%), government spending (34%), and immigration (34%) and virtually level with taxation (21%).

This lack of interest reflects how, before Dobbs, a Republican candidate’s position on abortion represented more a statement of principles than of intended policy. As long as the Supreme Court upheld Roe v. Wade, Republican candidates could say whatever they wanted without it truly meaning anything. Consequently, a wide spectrum of voters, whether supportive of outright abortion bans, opposed to late-term abortions, merely opposed to Roe on constitutional grounds, or, in many cases, not interested in abortion as an issue at all, could come together and vote for a Republican candidate. Democratic appeals on abortion, meanwhile, fell flat.

With Roe overturned, any position on abortion is no longer ‘risk-free’ for Republican candidates as indicated by the remarkable rise in importance of abortion as an electoral issue for Democratic leaning voters.

Recent events such as Democrat Mary Peltola’s victory over Sarah Palin in an Alaskan special congressional election, the first Democratic victory in that seat in fifty years, demonstrate how much the political landscape has shifted this summer. In June, prior to the Dobbs decision, Peltola had come in a distant fourth place in the seat’s primary election.

With little more than two months to go until the November midterm elections, can the Republicans reach a common position on abortion that does not antagonise Democratic-leaning voters? Or will Democrats continue to seize the initiative?