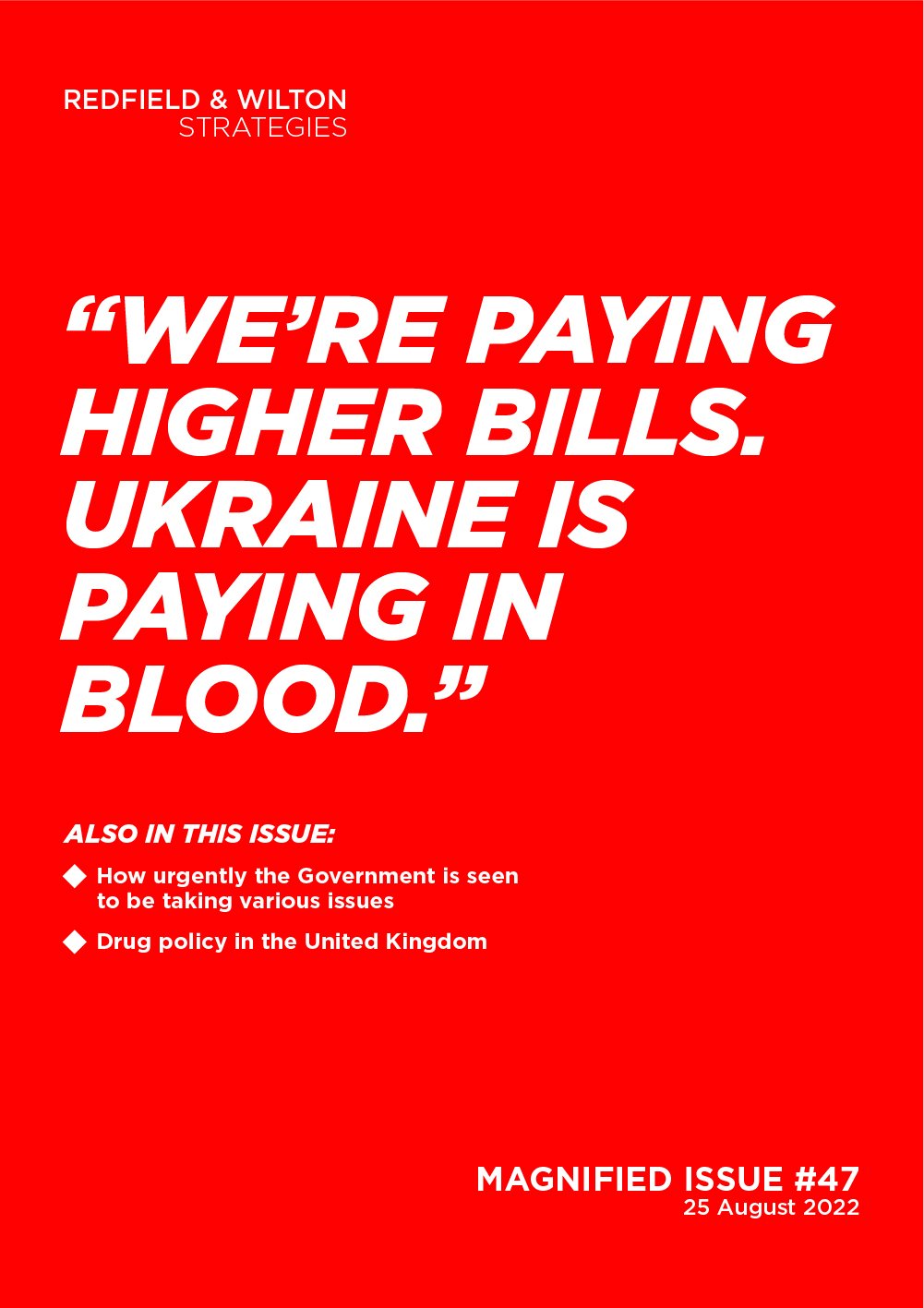 It’s time to take a look at the polls! After a hiatus for August holidays, Magnified is back. In this week’s issue, we respond to Boris Johnson’s comments in Ukraine yesterday urging Britons to endure the cost-of-living crisis to support Ukraine.

With the vast majority of Conservative Party members having already voted, the contest has clearly dragged on for too long—the natural consequence of a mail-in only voting system. If, instead, the election had been held in person with a specific day or handful of days for members to cast their votes at a polling station, the length of the contest might not have seemed as interminable.

In such an alternative scenario, the knowledge that most voters would have been yet to vote could have lent some anticipation about the result of this election. Coverage about various campaign events and hustings would have seemed more important, given their potential ability to sway voters. Those who have endorsed a candidate in the first weeks of this contest—Conservative MP’s, newspapers, political commentators, etc.—might have waited a bit longer to make their decision.

Although Conservative Party members can technically change their votes online up until the very deadline to submit one’s ballot, the contest already seems a foregone conclusion. It is not necessarily the length of this contest that is problematic, as some commentators have suggested, but its dynamics, which has created this interregnum where the new Prime Minister has effectively been chosen but all of us have to wait.

As the Conservative Party leadership’s contest drones on, the Government does not appear to the public to be addressing the country’s problems with a strong sense of urgency, a vacuum into which the Labour Party has entered.

So spoke Prime Minister Boris Johnson yesterday as he visited Ukraine in order to pledge another £54 million in support on behalf of the British taxpayer.

The implication of his statement, that the cost-of-living crisis and the rising cost of energy bills in particular is a direct consequence of the war in Ukraine, could not be clearer.

Its implied threat to the British public, also, could not be less subtle: any demand for cheaper energy, any desire for a more comfortable life, any discontent at the present situation could only mean a lack of sympathy for those in Ukraine and an unwillingness to make a moral and just sacrifice for their cause.

Dealing with dictators and murderous regimes, the credo goes, is the price for our prosperity, and our newly rediscovered unwillingness to condone Vladimir Putin’s behaviour must therefore come at a steep price.

Except, of course, the British public cannot accept this explanation as true.

In early February, a few weeks prior to the Russian invasion of Ukraine, 62% of the British public agreed that the UK should only negotiate trading agreements with countries that meet certain human rights standards, with no exceptions even for countries that may bring a clear benefit to the UK. Just 8% disagreed.

Before the invasion of Ukraine, Britons already wanted their country to adopt a moralistic trading stance. The public already wanted, and perhaps indeed thought they had, an economy whose prosperity did not rely on their reluctant condoning of—or even the goodwill of—the world’s dictators.

In the eyes of the public therefore, the United Kingdom should not have to pay exorbitantly higher energy bills in order to stand up to Russia. The public sees the UK’s and its allies’ economic integration with and indeed apparent dependence on the supply of Russian gas as nothing less than a deliberate choice by the Government and by market actors.

For this reason, our latest polling finds that while, yes, 75% of members of the British public say the war in Ukraine is ‘significantly’ (45%) or ‘fairly’ (30%) to blame for the current high cost of energy in the United Kingdom, similarly large proportions also find the UK Government (67%) and private energy companies (81%) as much to blame.

In 2018, the UK Government decided not to invest in gas storage facilities, despite public urging. As a result, the country has had one of the lowest levels of gas storage in Europe. Even as the United Kingdom serves as an entry point for American and Qatari gas coming into Europe, little of that liquified natural gas is being stored here.

In 2010, Leader of the Liberal Democrats Nick Clegg, who would soon become Deputy Prime Minister, dismissed the prospect of building nuclear energy, because new plants would not be ready until 2021 or 2022 at the earliest. Britain now has only five remaining nuclear plants in operation after Hinckley Point B closed earlier this month.

The above examples are just two instances of a number of complacent but no less deliberate decisions that put the United Kingdom in the present predicament.

Seen in this light, Boris Johnson’s statement in Ukraine, like his own resignation speech in July, represents a failure to accept responsibility. His false equivalence only exposes the continuing failures of his government and demonstrates the urgency for his successor to take a new direction.

‘Three strikes and you’re out’: Middle-class drug users to be banned from nightclubs and bars
The Telegraph | 18 July 2022

OUR TAKE: Last month, Home Secretary Priti Patel announced a proposed policy that would bring harsher punishments to recreational users of harmful drugs. However, according to polling we at Redfield & Wilton Strategies have conducted on behalf of the APPG on Drug Policy, a narrow plurality of the public (44%) sees an individual’s use of harmful drugs as something that should be viewed as a health issue to be addressed by professionals, rather than as a criminal activity that should be addressed by the police (40%)—suggesting that this policy might not be strongly popular with the public.