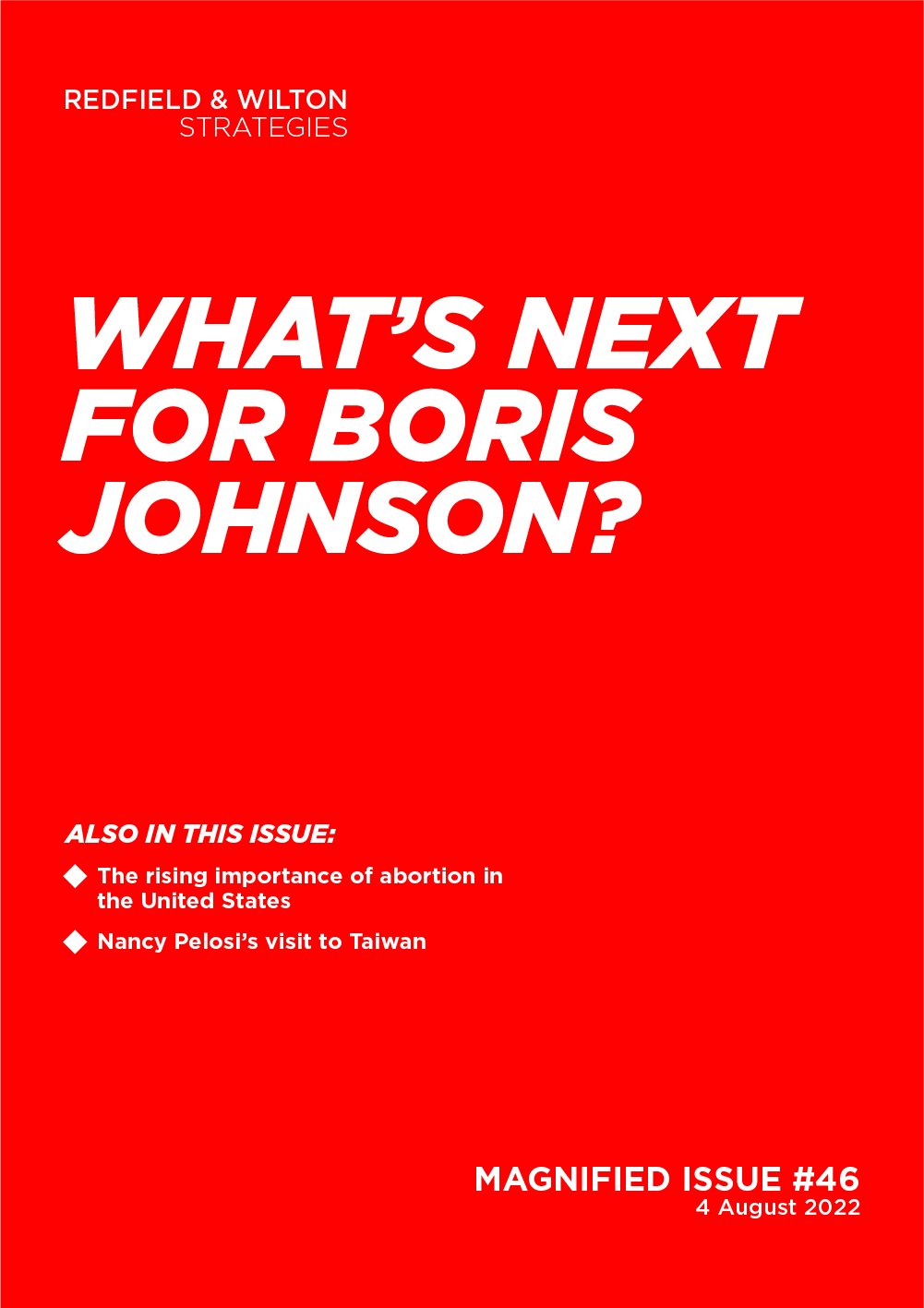 It’s time to take a look at the polls! In this week’s issue of Magnified, we take a brief look at the next Prime Minister’s “Boris Problem.”

Our latest voting intention poll finds the Labour Party leading by 8%, up from 4% on Monday. Following an initial bounce for Labour on the day of Boris Johnson’s resignation to their largest lead we have recorded (12%), our voting intention polling has returned, roughly, to a 32%-34% range for the Conservative Party and a 38%-40% range for the Labour Party.

With the ongoing press coverage of the Conservative Party’s leadership contest (74% of the public say they have heard a significant/fair amount about the contest, ranking it one of the more heard about news in the UK in the past month), the overall situation may still improve for the Conservatives in the near future.

Liz Truss continues to narrowly lead Rishi Sunak in our polling of the British public (36% to 30%) and, somewhat more sizeably, of those who voted Conservative in 2019 (46% to 34%).

Most significantly, Liz Truss has led Labour Leader Keir Starmer for better Prime Minister in both of our polls this week. Though a narrow margin (37% to 35% in today’s poll), these two results mark the first occasions that Truss has led Starmer and the first occasions since March, that is in four months, that any Conservative MP has led Keir Starmer among the British public.

The Conservative MP who led Starmer in March was none other than the once popular Rishi Sunak, who now continues to stand seven percentage points behind the Leader of the Opposition (39% to 32%). Following the collapse in his approval rating in April, largely due to his performance on the economy, Rishi Sunak has failed to lead Starmer once.

Though ballots are being mailed out this week, there are still weeks to go in the Conservative Party’s leadership election. Unusually, members of the Conservative Party have the option to not only vote online but also to change their vote, even their mailed vote, online up until the 2 September deadline.

In theory, this ability to change one’s vote means that the contest will stretch to the very end. A so-called “October surprise” could provoke a surge of voters switching their votes at the last minute. Even without such a surprise, the two candidates cannot afford any break from campaigning.

Earlier this week, voters in Kansas rejected a state constitutional amendment that would have removed protections for women seeking to have an abortion. Some commentators have noted a higher than usual turnout among Democratic voters in what is a traditionally Republican state, representing the surging importance of abortion as an electoral issue for Democratic voters since Justice Alito’s ruling opinion in Dobbs v. Jackson Women’s Health Organization was leaked earlier this year.

Indeed, 54% of those who voted for Joe Biden in 2020 now say abortion is one of the three issues that will most determine how they will vote in this year’s election, up from 22% in January.

To be sure, amidst Joe Biden’s poor performance on the economy, those who lean Democratic anyways may merely be identifying, post-facto, a positive explanation for why they would vote Democratic (we ask respondents to our polling what issue will determine how they will vote after we ask them how they will vote).

Yet, such a positive reason can be the difference between voting and not voting for such voters.

In any case, what laws US States should adopt regarding abortion is certain to be central to the Democratic Party’s platform in the 2022 Midterm Elections.

What’s Next for Boris Johnson?

It is true that Johnson has, likely permanently, lost the support of a significant enough fraction of his Party’s 2019 voters (32% said they would oppose him staying as Prime Minister) and has inspired such venom among the rest of the public that any return to Prime Minister is extremely unlikely.

Among the broader public, 57% say Boris Johnson should not be given a seat in the next Prime Minister’s cabinet. Just 25% say he should be given one. 48% cite Johnson as one of three Conservative MPs prompted who should definitely not be given a Cabinet position, followed by 26% who select Priti Patel.

Yet, Johnson’s favourable position among the Party’s faithful nevertheless does pose a political threat to his successor. Any criticism by Johnson or treatment of Johnson deemed unduly harsh and improper by the Conservative Party’s core voters could split the Party and leave the Conservatives in an exceptionally poor position heading into the 2024 General Election.

It may be, therefore, that Johnson should be given some role in the next Government. But what?

The one policy issue where more members of the public say Johnson’s successor should pursue a similar approach (42%) rather than a different approach (32%) to Johnson’s is the war in Ukraine.

Indeed, Boris Johnson is seen as being uniquely responsible for the United Kingdom’s steadfast support for Ukraine, something which the public continues to strongly support even amidst a cost-of-living crisis that has been compounded by the war in Ukraine. The widespread approval of Johnson’s performance on Ukraine stood out so strongly that, anytime Boris Johnson’s position as Prime Minister came under threat, his press team would brief that he had had a phone call with Ukrainian Premier Volodymyr Zelensky.

As such, a plurality of the public (39%), including a clear majority of those who voted Conservative in 2019 (55%), would support the next Prime Minister appointing Boris Johnson to a role where he continues to be involved with the United Kingdom’s support to Ukraine.

The possibility of a nomination to the position of General Secretary of NATO has been floated but is unlikely to succeed. Without even considering the position of Britain’s allies, 44% of the British public would oppose such a nomination, against just 24% who would support it.

That said, Boris Johnson’s successor could consider giving the outgoing Prime Minister some other role with regard to the conflict in Ukraine. With so many of the Party’s faithful still supportive of Johnson, whoever is the next Prime Minister ought to be careful to avoid exiling Johnson entirely.

OUR TAKE: Nancy Pelosi is visiting Taiwan this week, the first visit in decades by a senior American politician, an event to which China is responding belligerently. While the event has been less noticed by the British public, a slightly greater portion of the public nevertheless now think a conflict between China and Taiwan in the next year is likely (39%) than in June (33%).

Not radical enough? Starmer’s caution may yet carry Labour to power
The Guardian | 2 August 2022

Liz Truss is more trusted than Rishi Sunak to deal with cost of living crisis, poll finds
The Sun | 30 July 2022