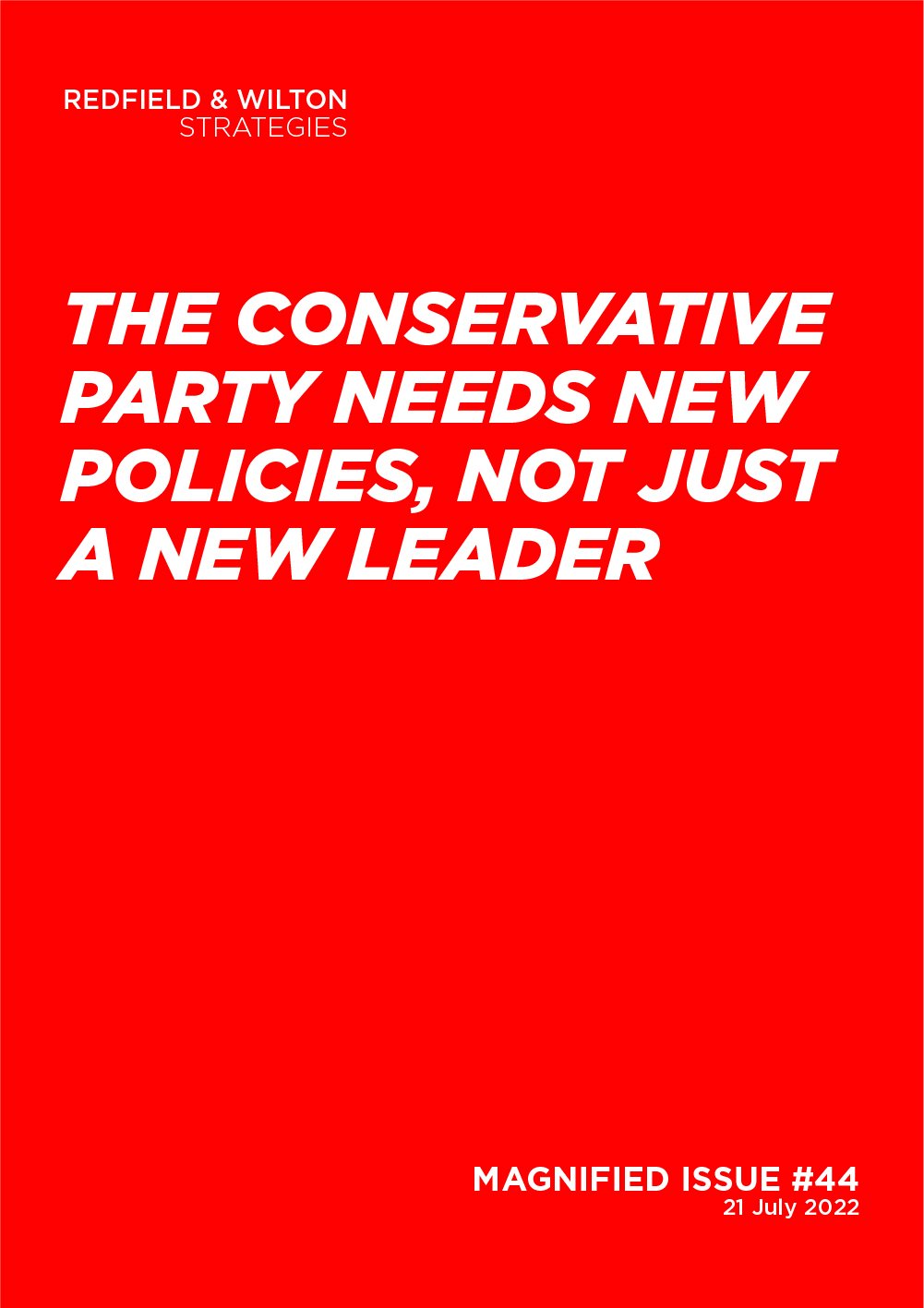 It’s time to take a look at the polls! In this week’s issue of Magnified, we respond to the selection of Liz Truss and Rishi Sunak as the final two candidates to replace Boris Johnson as Prime Minister.

It has been two short weeks since Boris Johnson resigned, and we now have our final two candidates to replace him as Leader of the Conservative Party and therefore as Prime Minister: Foreign Secretary Liz Truss and former Chancellor of the Exchequer Rishi Sunak.

The two candidates—Rishi Sunak in particular—have made their way to the final round of the leadership selection process in large part due to their familiarity with the public. They were the two most publicly recognisable candidates, and they therefore had the most momentum going into the short selection process among Conservative Members of Parliament.

The brief rise of Penny Mordaunt as an alternative, both in our polling and in the selection process itself, was significantly driven by a “none of the above” sentiment towards Liz Truss and Rishi Sunak; a third way which proved illusory when Mordaunt faltered under the microscope during last weekend’s television debates.

With a short leadership selection process, the Conservatives condemned themselves to selecting the most familiar candidates (or least unfamiliar in the case of Truss).

However, in the coming final round of voting among the membership, Rishi Sunak’s immense familiarity with the public and his close association with Boris Johnson’s economic policies may prove to be his undoing.

69% of the public, including 76% of 2019 Conservative voters, think Rishi Sunak has played a ‘fairly’ or ‘significantly’ important role with regard to Boris Johnson’s economic policies. Similarly, 66% of the public and 74% of 2019 Conservative voters think Sunak has had a ‘fairly’ or ‘significantly’ important role in Boris Johnson’s tax policies.

Sunak will therefore be tagged as the continuity candidate, especially on the economy, when—as we’ve repeatedly argued—policy failures have been the primary cause of Boris Johnson’s downfall more so than even the most egregious of his character failings.

What the Conservatives have urgently needed since the coronavirus pandemic faded away earlier this year has been a concrete policy agenda: a set of policies that will, simply put, make life better in the United Kingdom. Merely changing the face of the Conservative Party, and not its policies, will be disastrous for the Conservatives’ election prospects in 2024.

Only 35% of 2019 Conservative therefore voters want the next leader to be someone who will ‘carry on business as usual.’ 49%, instead, would prefer someone who will implement radical policies. Voters want a renewed sense of direction from their government.

In particular, more than 40% of the Conservative Party’s own voters want Boris Johnson’s successor to take a different rather than a similar approach to taxes and Government spending—both of which they find too high. Only with regard to Brexit, foreign policy, and Ukraine do more than 55% of the Conservative voters want a similar approach in policy.

With the Government’s net approval rating on the economy at -25% and, at the same time, 63% of the public citing the economy as one of the three most important issues that will determine how they will vote in the next election, it should be obvious where a renewed sense of focus should be directed towards.

Given the considerable role he is seen to have played in Boris Johnson’s economic and tax policies during his more than two years as Chancellor, Rishi Sunak will find it exceptionally difficult to argue that he is the one who can deliver an urgently needed change in policies—particularly economic policies.

Already 43% of 2019 Conservative voters identify Liz Truss as someone who would ‘represent change,’ compared to nearly half the figure who say so regarding Rishi Sunak (24%). If she continues to successfully pitch herself as the candidate for change, Liz Truss will win this leadership contest.

Whether she will, if elected, actually implement new policies and then be able to successfully run against an even greater representative of change, Keir Starmer’s Labour Party, is another question.

New PM must get a handle on the economy or face losing next election, poll shows
Sun on Sunday | 09 July 2022