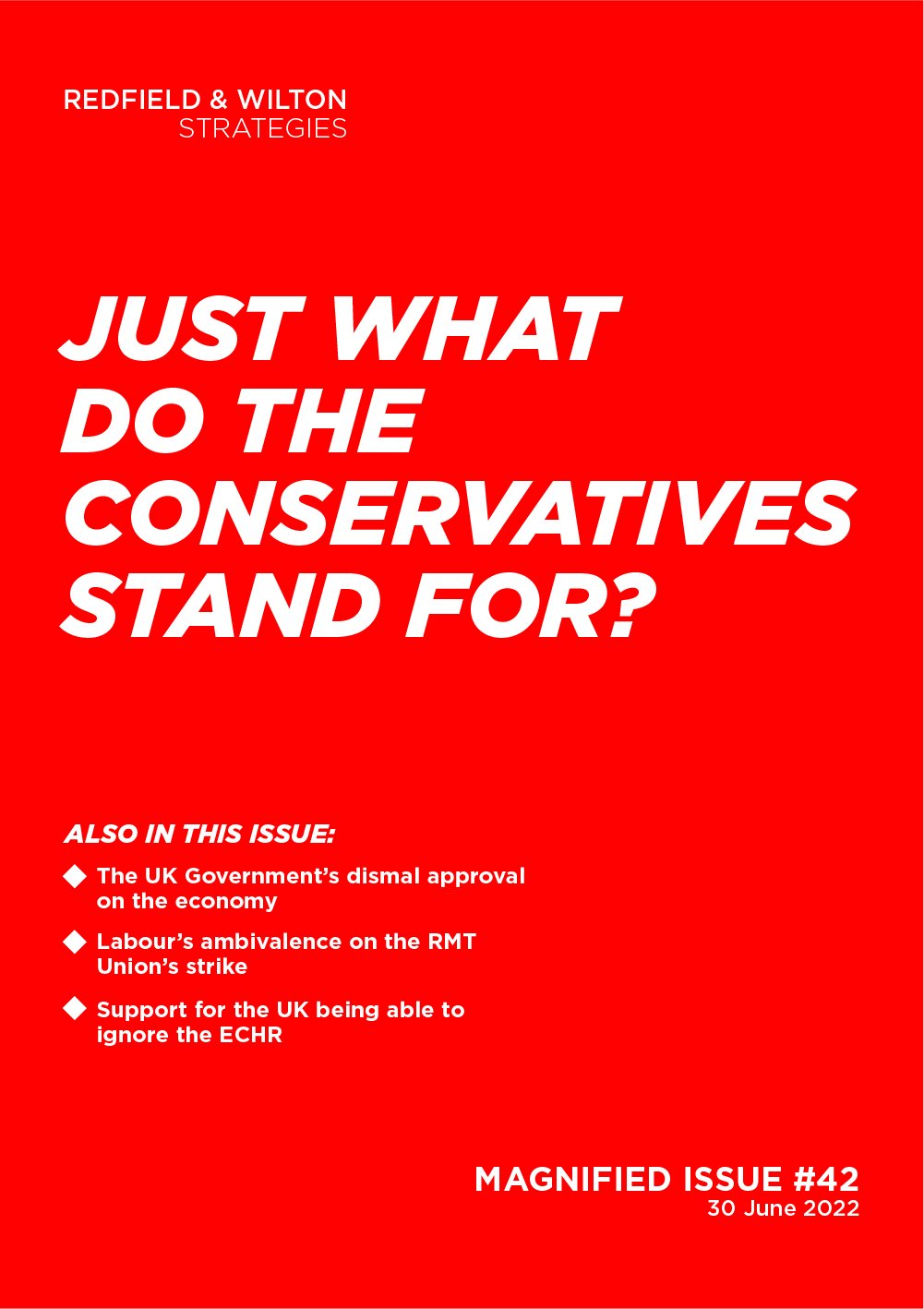 It’s time to take a look at the polls! In this week’s issue of Magnified, we take an in-depth look at what voters think the Conservative Party stands for.

Like our Sunday poll, our mid-week poll finds Labour leading by 8%.

As we reach the midway point of 2022, we note that the Labour Party has led in every single voting intention poll that we have conducted this year. Moreover, Prime Minister Boris Johnson’s approval rating has remained negative throughout and, apart from a brief spell in March during the invasion of Ukraine, consistently below -20%. Twice, his approval dropped to as far as -31% net.

The belief that thanks to the Government-acquired vaccines the pandemic was ending, and life was soon returning to ‘normal’ had brought Boris Johnson and his Government considerable public favour. A dire situation in January 2021 had been turned on its head by a successful Government intervention.

The coronavirus pandemic had, in early 2020, initially been seen as something that could not be controlled or prevented. The concept of “herd immunity” was the guiding strategy of the Government (something they later tried to deny). Everyone would get sick, some would die, and we would get through it. Public health advisers even said that a lockdown would only delay the inevitable, with another wave of infections taking place as soon as the country opened up again.

Yet, the Government U-turned, decided to lockdown, and staged a number of other interventions such as expanding NHS hospitals, mass testing, and vaccine procurement. They were ultimately rewarded for these decisions in 2021 with positive approval.

Now, in 2022, the coronavirus crisis stretches onwards in another form: its social and economic consequences. We can only ask ourselves: where has the Government’s sense of urgency gone?

In April, we wrote in Magnified that “more than the party-gate scandal, the war in Ukraine, the pandemic, or various other leaks and gossip coming out of Westminster, it is the economic pain currently felt by the British public that is hurting the Government in the polls.” At the time, net approval for the Government’s performance on the economy stood at -21%.

Little has changed nearly three months later. Approval for the Government’s economic performance stands at a dismal -25% net. Despite totalling more than £15 billion, Rishi Sunak’s cost-of-living support, announced in late May, has utterly failed to shift the dial.

It is not difficult to understand why.

After all, as we wrote following their announcement, Sunak’s measures did not intend to address the problem of inflation itself. Instead, the measures have only been intended to help those suffering most as a consequence of the problem.

The Government and its Central Bank continue to believe that they can do nothing to bring inflation to heel, that they are, in a word, “helpless.” And so, inflation—the central economic problem facing the United Kingdom—continues to persist, the Government’s approval on the economy remains considerably negative, and the Labour Party continues to lead in the polls long after party-gate has subsided.

What Does the Conservatives Party under Boris Johnson Stand For?

In the run up to the 2016 EU Referendum, then Mayor of London Boris Johnson famously wrote two opinion pieces, one in favour of Leave and one in favour in Remain, before ultimately deciding to back Leave.

Regardless of whether this exercise represented genuine indecision or was merely an attempt to hone his arguments in favour of Leave, this incident has ever since seemed to embody Johnson’s erratic nature. Is he a genuine believer or merely an opportunist?

Even amongst those who should otherwise be his allies or supporters, the sense that Boris Johnson lacks genuine convictions is considerable. In polling conducted this week, Conservative voters are equally split on the question of whether Johnson supported Brexit “primarily because he genuinely believed in it” (51%) or “primarily because it would advance his political career” (49%).

Prior to the 2019 General Election, the ardent pro-Brexit campaigner Nigel Farage responded to an ITV interview question that, if he were signed up for ITV’s “I’m a Celebrity,” he would choose to spend it alongside Boris Johnson in order to find out “what [Johnson] really believes in.”

With Boris Johnson as Prime Minister, this inability to pin him down has left voters uncertain about the Conservative Party and the Government he leads.

Last week, we asked voters what they thought the Conservative Party under Boris Johnson stood for. Though this data is largely qualitative, their responses, particularly those of the Conservatives’ own voters, are nonetheless revealing.

Many of those who voted Conservative in 2019 say something along the lines of:

Some who would still vote Conservative today add, merely, that though they do not know, the Conservatives are at least better than the alternative. “Don’t know, but better the devil you know,” one respondent opines. “Unsure on this, but I’d rather have Boris than Starmer,” says another.

Beyond those unsure, few Conservative voters can point to a concrete agenda. Only five respondents cite levelling up, something we have identified as being seen as an empty promise. Other conservative-leaning respondent regurgitate plaintive slogans, such as:

While others mention more aspirational principles, including:

“The opportunity to better oneself.”

Altogether, however, the responses of Conservative voters, people who voted for the Conservatives less than three years ago, cannot be tied together in a thread or to a common set of policies and ideas.

Some respondents even highlight this loss of a conservative identity. One respondent writes, “Their policies are not as conservative as in the past,” while another says, “Previously tax cutting and keeping the economy under control, but neither at the moment.”

A substantial portion of these voters would still vote Conservative today, but they evidently have no rallying cause.

Meanwhile, respondents who have voted for opposition parties in the past are often vitriolic, writing caustic words such as:

Of course, one would normally expect many of those who strongly dislike Johnson to say derisive things about him. Even so, a Prime Minister’s detractors should still know and be able to cite what he stands for. In December 2019, a far more significant number of opposition party voters would have at least identified Johnson and the Conservatives with Brexit. However, with Brexit having been “done” for two years now, few still think of this issue when they think of Johnson.

Simply put, the Conservatives lack an agenda. The words of voters demonstrate this truth better than any polling data point we can share.

OUR TAKE: The party that was founded in support of workers has been notably hesitant to show support for the RMT rail union workers’ strike. This ambivalence of the party leadership matches the ambivalence of 2019 Labour voters, only a plurality (45%) of whom say Labour should support the strike. 28%, by comparison, say Labour should be neutral on the strike, while 21% say the party should oppose the strike.

OUR TAKE: After the European Court on Human Rights (ECHR) blocked a flight of asylum seekers from the United Kingdom to Rwanda, the UK Government has drafted legislation to allow the Government to be able to effectively ignore the ECHR. Our polling finds half (52%) of the public in support of this change, including two-thirds (66%) of those who voted Conservative in 2019.