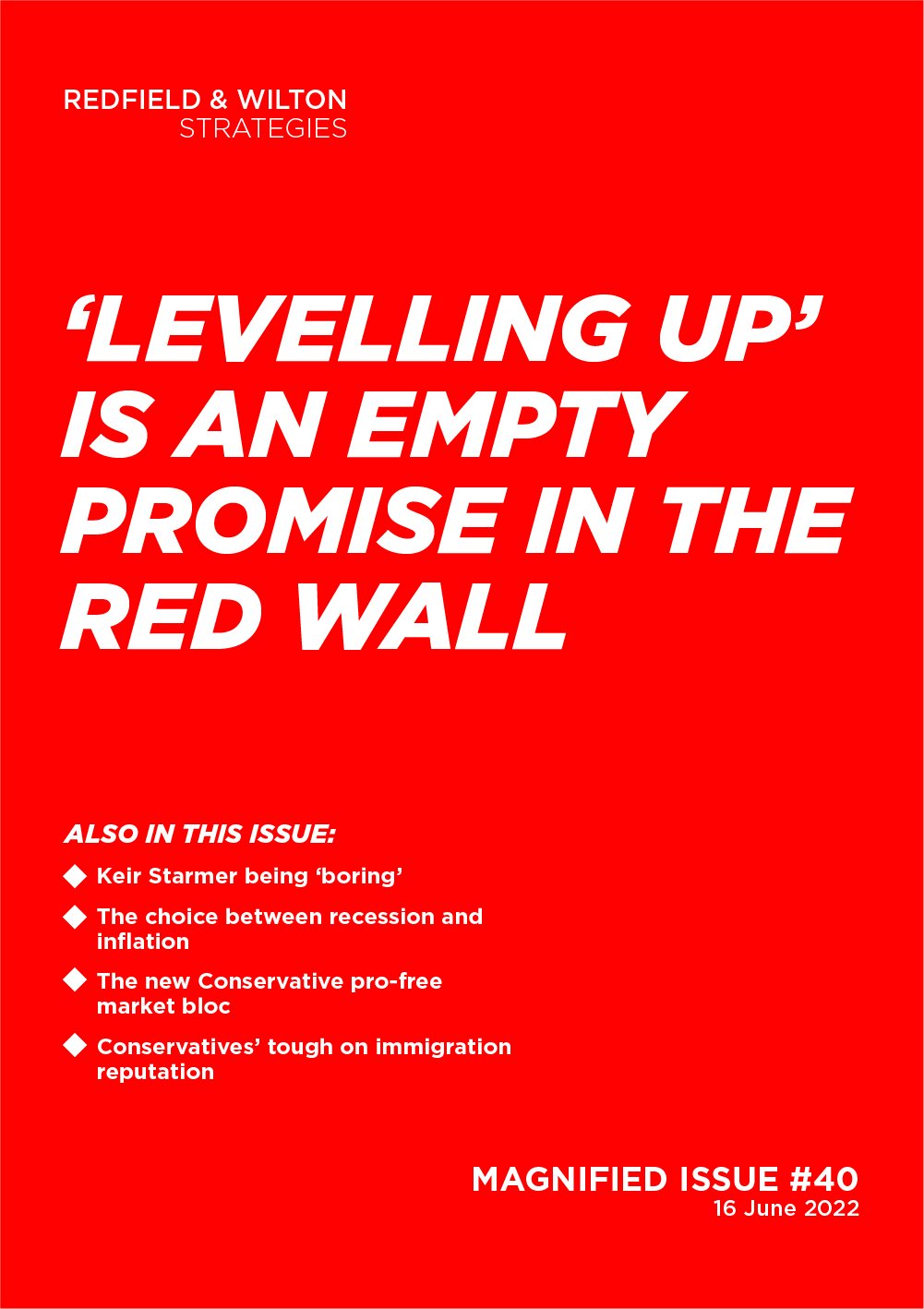 It’s time to take a look at the polls! In this week’s issue of Magnified, we take an in-depth look at how the Conservatives’ ‘Levelling Up’ agenda has failed to make an impression among voters in the historically Labour voting ‘Red Wall’ constituencies that they flipped in 2019.

Our voting intention poll finds Labour leading the Conservatives by 8%, a marginal increase of 1% from Monday’s lead and the same lead as last week Wednesday.

One story that has made waves in the media this week concerns Keir Starmer and him being boring. Apparently, according to The Times, members of Keir Starmer’s cabinet have criticised the Labour leader for “boring voters to death.”

Our polling confirms that this public sentiment is considerable. 45% of members of the public, including 66% of those who voted Conservative and 35% of those who voted Labour in 2019, agree with the statement, “Keir Starmer is boring.” Of those who agree, just 21% think this trait is a good trait for a potential future Prime Minister.

Yet, looking more closely, we also find that 39%, a lower figure, agree that a politician must be entertaining in order to appeal to voters like them, while a sizeable 32% disagree. In other words, being entertaining is not necessarily a prerequisite for electoral success, even if being lively and entertaining would certainly be helpful.

And indeed, Labour with ‘boring’ Keir Starmer has been leading in our polling for more than half a year—since 8 December. Starmer’s inoffensive nature, which we have noted before, can be a curse, but it can also a blessing when contrasted with someone who is outright derided as Boris Johnson has been in the past few months.

With consistently negative approval ratings, Starmer’s performance has hardly been impressive, but as Machiavelli might have written if he had ever pondered this unusual question: better to be boring than to be hated.

During times of high inflation, central banks and the Government can choose to pursue policies that reduce the supply of money in the economy, such as raising interest rates or reducing Government expenditure, in order to combat inflation. Such policies, however, risk incurring a recession.

Our polling finds the public roughly evenly split between whether the Government should prioritise avoiding more inflation (43%) or avoiding a recession (40%).

This discrepancy could be due to the typical financial situation of those who belong to each age group. Those who are young tend to be asset-poor wage-earners and are thus highly vulnerable to inflation while those who are older tend to own assets and may receive a pension that is guaranteed to increase in line with rising inflation.

Another possible reason is memory. Those below the age of 34 were, at most, 20 years old when the last recession began. They therefore may not have experienced or may simply not remember the effect that an economic recession can have on the average person.

‘Levelling Up’ is an Empty Promise in the Red Wall

This week, we at Redfield & Wilton Strategies began publicly releasing the results of our ‘Red Wall’ tracker. This targeted polling comprises the 40 historically Labour voting constituencies that the Conservatives flipped in 2019 (plus Hartlepool, which was flipped in a 2021 parliamentary by election).

Our latest Red Wall polling finds Labour leading the Conservatives by 10%. For context, Labour averaged 9% behind the Conservatives in these seats in 2019. One projection based on our polling has Labour winning back 37 of these 40 seats.

What has happened here?

First and foremost, many in 2019 voted for the Conservatives in order to ‘get Brexit done.’ The merits of Brexit itself or how it was getting done or what would happen after it was done were less relevant to voters than simply getting the whole thing over with after three years of deadlock. That core appeal was the key to the Conservatives’ stunning election success.

Yet, the Conservative Party did have a pitch beyond Brexit in their 2019 platform. Once Brexit was ‘done,’ Boris Johnson promised that his party would ‘level up’ the regions of the United Kingdom. This slogan was clearly meant to appeal to those in left behind areas that voted for Brexit, like the constituencies in the ‘Red Wall.’

What this slogan is supposed to mean in practice, however, has been unclear, and it is this failure of the Government’s levelling up agenda to register with voters that has now put the Conservative Party ten points behind Labour in the very seats they need to win again to keep their majority.

60% of voters in the Red Wall seats polled say they do not think the Government has made a clear effort to ‘level up’ the area in which they live. This figure includes 46%, a plurality, of those who voted Conservative in 2019.

When confronted with a list of possible improvements one could see in one’s local area, ranging from various infrastructure projects to increases in police officers and new incentives for businesses to invest in the area, 57% of voters in the Red Wall say they have seen no such improvements in the past few months. Responses to this question do not vary by past vote (55% both from 2019 Conservative and 2019 Labour voters).

When pitted against other parties, 35% of the Red Wall public say they most trust Labour to level up the area in which they live (note, results for this question are not weighted by likelihood to vote and include undecided respondents). Just 21% say they would trust the Conservatives with respect to its signature policy.

At the end of the day, the critical failing of ‘levelling up’ is that it is too vague. Levelling up could mean anything, and it therefore has come to mean nothing. An empty promise.

Two weeks ago, when we last asked the question, more than half of the Red Wall public, 56%, said they understood ‘nothing at all’ (27%) or only ‘a small amount’ (29%) of what Boris Johnson or other members of the Government have meant when using the phrase ‘levelling up.’

Concrete proposals, such as building a specific piece of infrastructure like a road, a railway, a bridge, an internet network or creating incentives for businesses to invest, allow the public to hold the Government to account. At the end of a Parliamentary term, voters can ask, “Did they do what they said they were going to do?”

With the next general election two years away, will the Conservatives keep repeating this empty promise or will they switch to something more concrete?

OUR TAKE: As he did with the European Research Group, Steve Baker is reportedly organising his fellow Conservative MPs into a new voting bloc, one centred on Thatcherite principles. The task of this group will be formidable. At this moment, just 26% of the public identify the stance ‘believes in the free market’ with the Conservatives. 21% associate the stance with Labour.