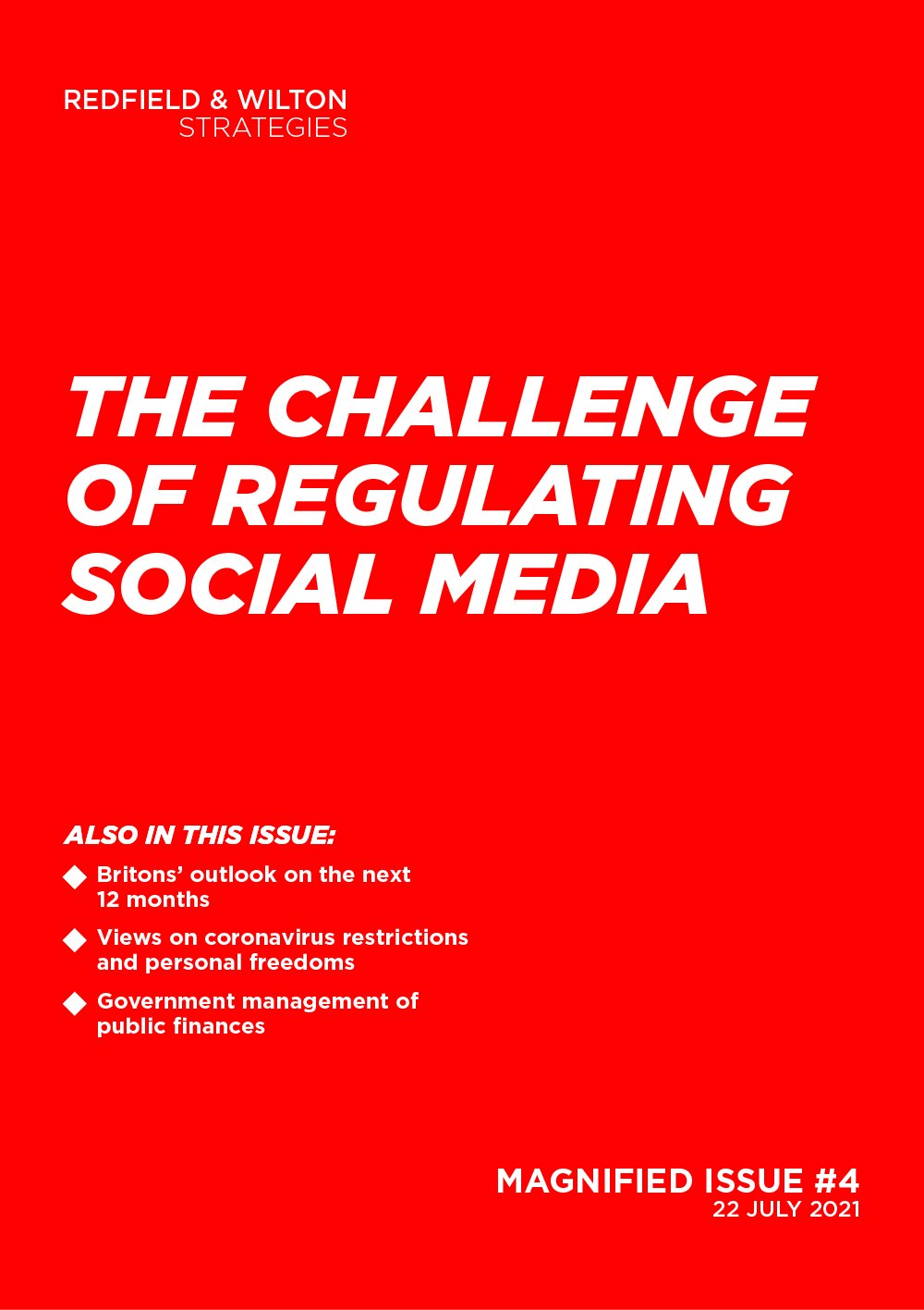 It’s time to take a look at the polls! Each week, Magnified delivers insights and analysis straight to your inbox, allowing you to stay up to date on what the public think about the most important issues of the day. Keep reading for the latest updates on our weekly trackers, as well as our national and international polls. Today, we also take an in-depth look at the public’s attitudes towards the regulation of social media and the challenges the Government faces with regards to its Online Safety Bill.

Our latest Voting Intentions poll gives the Conservatives a nine-point lead over Labour, with 42% (-1) of voters saying they would vote for the Conservative Party if an election were to be held tomorrow. Despite this lead, the Government’s net competency rating has dropped further to -11%, and Prime Minister Boris Johnson’s net approval rating is also in negative territory again, at -1%. With daily coronavirus cases in the UK surpassing 50,000 for the first time since January last week, soaring infection rates are likely a contributing factor to this downward trend in approval and competency ratings for the Prime Minister and his Government.

Where Labour is concerned, reports that Keir Starmer is preparing to proscribe several far-left factions in a bid to distance the party from extreme left views and thereby make Labour more electable again have not translated into gains in the polls for the time being. With Labour’s National Executive Committee expected to formally issue the proscription this week, whether or not this move will impact voting intentions remains to be seen in next week’s poll.

Great Britain: 58% of Britons think the Government is in a financial position where it cannot afford to take on more debt. Yet, there is disagreement over respondents’ preferred way to balance finances: 42% favour spending cuts, while 37% prefer tax increases. Read more here.

Great Britain: 49% of 18-to-24-year-olds and 54% of 25-to-34-year-olds think that coronavirus restrictions infringe on their personal freedoms and liberties as British citizens. At the same time, only 31% those 65 or above think the same. Read more about these generational differences here.

When the Government published its long-awaited Draft Online Safety Bill in May 2021, Digital Secretary Oliver Dowden said this new legislation would ‘usher in a new age of accountability for tech and bring fairness and accountability to the online world’ while still protecting freedom of speech and upholding democratic debate online. In light of recent events, such as England players facing racial abuse online after England’s defeat in the Euro 2020 final, such legislation appears all the more topical, and we observe important levels of support for Government regulation of social media.

In practice, however, the implication of such legislation for the Government is that it will be torn between two most likely irreconcilable camps: one side will see any attempt at regulating social media as not going far enough in protecting users, while the other will see any attempt as an unacceptable infringement on their right to free speech. A compromise between the two may be the only possible way out, but such a balancing act between safeguarding free speech and protecting online users against undue harms is likely to leave both camps dissatisfied.

As outlined in the Government’s response to the Online Harms White Paper, social media firms will have a ‘duty of care’ towards their users, meaning they will need to take robust action to address not only illegal abuse posted on their sites, but also content that is deemed harmful while not reaching the threshold for criminality. On a general level, our polling finds strong support for such measures: 62% of the British public support social media companies censoring content that they deem sexist, homophobic, or racist, compared to only 18% who oppose. 17% neither support nor oppose. In addition, 55% of respondents support social media companies being regulated by the Government—an arrangement which 19% oppose and 22% neither support nor oppose.

Under the Draft Online Safety Bill, Ofcom will set guidelines, but ultimately, translating these guidelines into policies, as well as implementing and policing these, will be the responsibility of social media companies. Given that 50% of Britons say they have ‘very little’ trust in social media companies and a further 32% say they only have ‘some’ trust, making this model work and fending off accusations of ‘outsourcing policing to Silicon Valley’ would require Ofcom’s guidelines to be highly specific.

It is evident that defining where to draw the line between harmful and non-harmful content necessarily involves a degree of subjectivity and is therefore not an easy task. Yet, the Online Safety Bill’s success likely hinges on the Government’s and Ofcom’s ability to provide clear instructions to social media companies. It is failure to do so that could create a threat to freedom of expression, as vagueness would open the door to campaign groups of all orientations flagging content that goes against their views as harmful. In the absence of clear rules, it will be all the more difficult for content moderators to decide where given content falls on the ‘non-harmful-to-harmful’ spectrum.

While the Government’s current proposal may allow Ofcom to issue fines of up to £18 million, or 10% of a providers’ annual global revenue, whichever is highest, to companies who are found to be in neglect of their duty of care, there is much less that can be done to take action against individual users. Indeed, one of the criticisms frequently levelled at the draft bill is that under its current version, a user’s account may be taken down for posting content deemed harmful, but nothing can stop that user from starting a new account under a new name.

Another issue at stake, then, is online anonymity. Our most recent polling finds significant support among the British public for ending online anonymity: 65% of respondents would support banning anonymity for social media accounts—a measure which 12% would oppose and 16% would neither support nor oppose. Yet, banning anonymity is far from uncontroversial. While proponents of the measure argue that anonymity leads to more hate speech and misinformation online, for instance, its opponents point out that anonymity is key to ensuring whistle-blowers or marginalised groups get to speak their mind without fear of discrimination.

What debates about banning online anonymity sometimes miss, however, is that such a measure would not necessarily mean that a user’s legal identity should be publicly available on their profiles for all other users to see—rather, it would require users to disclose their legal identity when first creating an account, enabling social media companies to readily identify users who post illegal or harmful content so that further action may then be taken against such users where necessary. For the time being, however, the introduction of identity disclosure requirements does not figure in the Government’s plans, even though a majority of the public would likely support such measures.

Irrespective of anonymity regulations, the Government will face the challenge of having irreconcilable demands made by digital regulation campaigners on the one hand and staunch free speech advocates on the other placed upon it as the Online Safety Bill approaches the pre-legislative scrutiny stage. Given the naturally ambiguous nature of online discourse, being as clear as possible in its guidance to social media companies on what exactly is to be classified as harmful and what is not will be crucial to minimising the risk of the bill infringing on free expression while also achieving its aim of reducing the amount of harmful content online. In this context, avoiding excessive vagueness will be key to increasing the Government’s chances of success when it comes to making good on its manifesto commitment to make the UK the safest place in the world to be online.

Euronews (13/07): “French rush to book COVID vaccines before restaurants require them to eat out”

Two-Thirds of Britons Support UK-Australia Trade Deal, With Over Half Thinking Deal Would Have Been Impossible Without Brexit
22 June 2021 (8 min read)

On the whole, compared to before the coronavirus pandemic, would Britons say their lives have improved or worsened? (see full tweet)

At this moment, which of the following individuals do you think would be the better Prime Minister for the United Kingdom? (28 June): (see full tweet)

How has the coronavirus pandemic positively disrupted the lives of Britons and their families? (see full tweet)

How would the French, German, Italian, and Spanish publics vote in a referendum to leave the EU? (see full tweet)