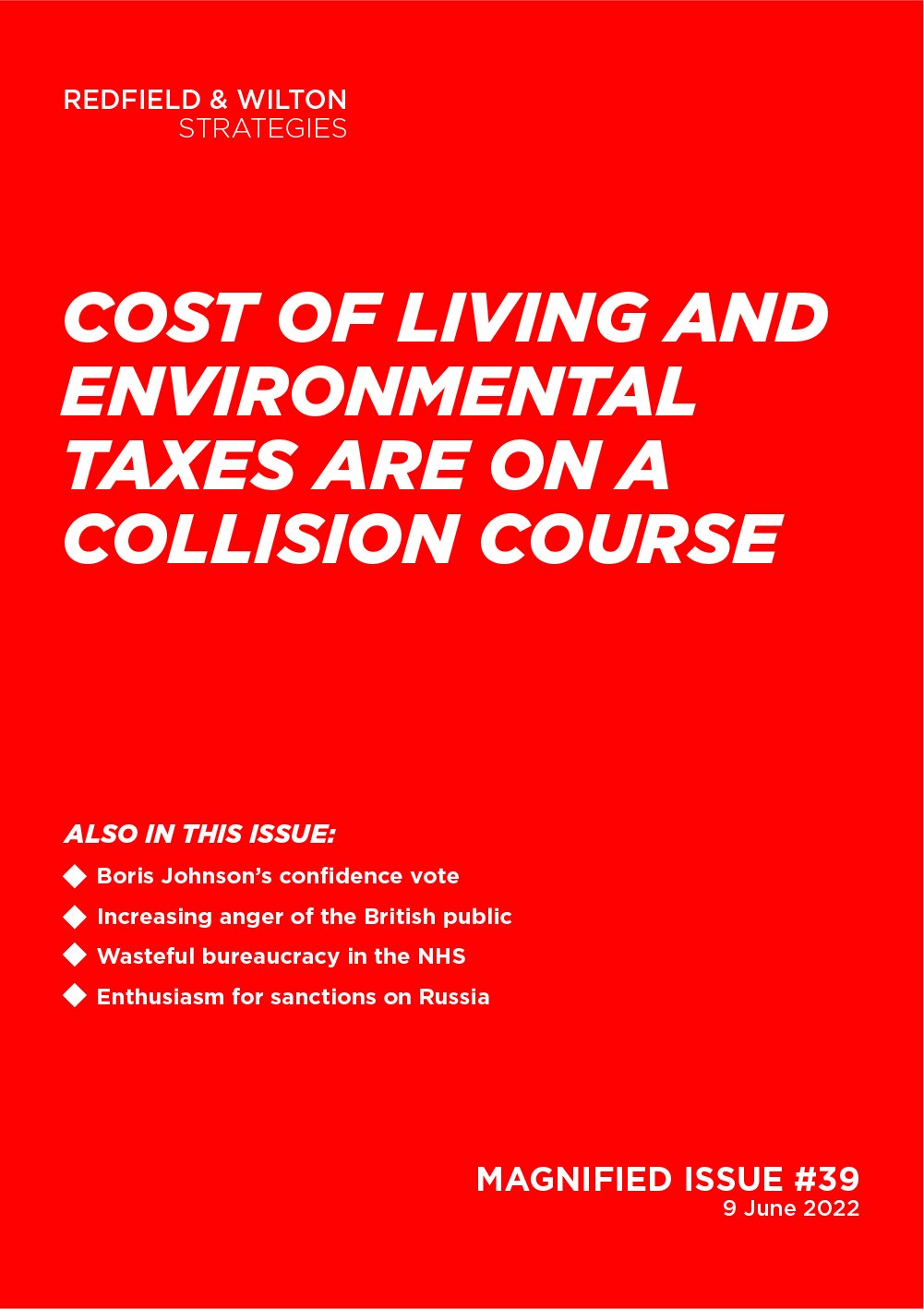 It’s time to take a look at the polls! In this week’s issue of Magnified, we take an in-depth look at how Britain’s environmental policies are set to collide with the rising cost of living.

Our voting intention poll continues to fluctuate around 38-40% for Labour and 32%-34% for the Conservatives.

There have been no dramatic changes in our polling following Boris Johnson’s 211-148 confidence vote victory, suggesting that few had been indicating an intention to vote a certain way under the expectation that Boris Johnson would be imminently forced out of his position.

As such, Monday’s result (59% to 41% among Conservative MPs) is, in fact, broadly reflective of where members of the public who voted Conservative in 2019 are.

Most interestingly, 20% of those who say they would still vote Conservative today say they would have voted no confidence in the Prime Minister. For such voters, other factors such as party loyalty, local conditions including the favourability of their local MP, or a greater dislike of the other parties on the ballot may explain why they presently would vote Conservative.

Though he has survived the confidence vote, the Prime Minister nevertheless has his work cut out for him. Half of 2019 Conservative voters who say they have confidence in Johnson say he will only retain their confidence with significant improvements.

Of those Conservative voters who express no confidence, two-thirds (68%) say Boris Johnson cannot win their confidence back no matter what. Winning back this group of voters by the next General Election will be a formidable task.

At this moment, a third of the public (34%) rate their level of anger at 4 or 5 out of 5 when thinking about the future of the country, up from 22% at the end of last summer. Those who rate their anger at 0 or 1 out of 5 have correspondingly decreased from 18% last summer to 11%.

Altogether, whereas the public was split at the end of August between being optimistic (34%) or pessimistic (35%) regarding the future of the United Kingdom, twice as many now feel pessimistic (45%) than feel optimistic (23%) when looking at the future.

This week, the OECD has projected that the United Kingdom’s economy is set to have, after Russia, the worst growth in the G20 this year. Such dire economic predictions amidst a front and centre cost-of-living crisis most likely inform the increasing anger and pessimism of the British electorate.

There is no doubt that the rising cost of living and the increasing prospect of a recession is weighing heavily on the minds of voters. 58% currently say the rising cost of living matters to them a significant amount (as opposed to a fair or slight amount, or no amount at all). No other issue, including the Queen’s Platinum Jubilee (32%), the war in Ukraine (also 32%), the coronavirus pandemic (30%), or the vote of confidence in Boris Johnson (24%) has a majority of members of the public currently saying the issue matters to them a significant amount.

On a Collision Course, The Cost-of-Living Crisis and Environmental Taxes

As we have written repeatedly in Magnified, the rising cost of living is the foremost issue in British politics. More than party-gate or any other issue, this economic catastrophe is the critical driver of the decline in support for the governing Conservative Party.

The urgent political need to address this crisis is clear. 41% of the public, a clear plurality, say Boris Johnson and his Government would need to change their response to the cost-of-living crisis in order to win their vote in the next General Election, followed by only 21% who say the Conservatives cannot win their vote with Boris Johnson.

In other words, the cost-of-living crisis trumps all. Sooner or later, as they did with the coronavirus pandemic, the Government will make the calculation that they must do whatever they can do to reduce the cost-of-living, to prevent it from rising further, and to push the British economy once again towards meaningful growth.

Inevitably, this prioritisation will put the Government in conflict with its measures intended to address that other crisis: climate change. Such measures included hefty taxes on fuel consumption, sizeable Government energy subsidies, and other incentives designed to make Britons’ carbon emissions more expensive.

As we mention above, 58% currently say the cost-of-living crisis matters to them a significant amount. By comparison, 20% say climate change matters to them a significant amount. Just 4% say Boris Johnson and his Government would need to change their response to climate change in order to win their vote in the next General Election.

By comparison, 53% of members of the British public say yes, the costs of the United Kingdom’s support for Ukraine have been worth it, something just 18% disagree with.

Intuitively, this difference makes sense. Britons think their country has been a leader in the effort to oppose Russia’s invasion of Ukraine and, more importantly, think they have done more than any other European country to help Ukraine. In other words, Britons feel that their sacrifices for Ukraine have made a meaningful difference.

By comparison, the effect of the sacrifices made by the British public to combat climate change are not as apparent. The United Kingdom contributes only a small percentage of the world’s carbon emissions. If the public were to take on all the sacrifices necessary to reduce their carbon emissions to net zero, the difference such action would make will probably be minimal.

As a result, 49% of the public say they would support the Government suspending its environmental taxes to reduce the cost of living, a figure that rises to 58% of those who voted Conservative in 2019. 18% of all respondents, including 16% of 2019 Conservative voters, say they would oppose such a suspension.

For a Government desperate to win back public support, can they afford to do otherwise?

OUR TAKE: Sajid Javid has said there are “too many [in the NHS] working in roles focused solely on diversity and inclusion” and has promised to reduce wasteful spending in the NHS bureaucracies. Voters appear amenable to this message. When prompted with the statement, “There is too much waste in the NHS’ spending,” 48% of members of the public agree and 19% disagree. When prompted with, “The NHS is too bureaucratic,” 46% agree and just 10% disagree.

OUR TAKE: The United Kingdom and Russia are the slowest growing (or most receding) economies in the G20 according to the OECD. Such projections have done nothing, however, to dampen the enthusiasm for UK sanctions against Russia following the war in Ukraine. 68% of the public currently support the sanctions, virtually the same as in early April (67%). 47% say yes, the UK is capable of maintaining the sanctions for a long time, down marginally from 50% in early April. 25%, by comparison, do not think so.