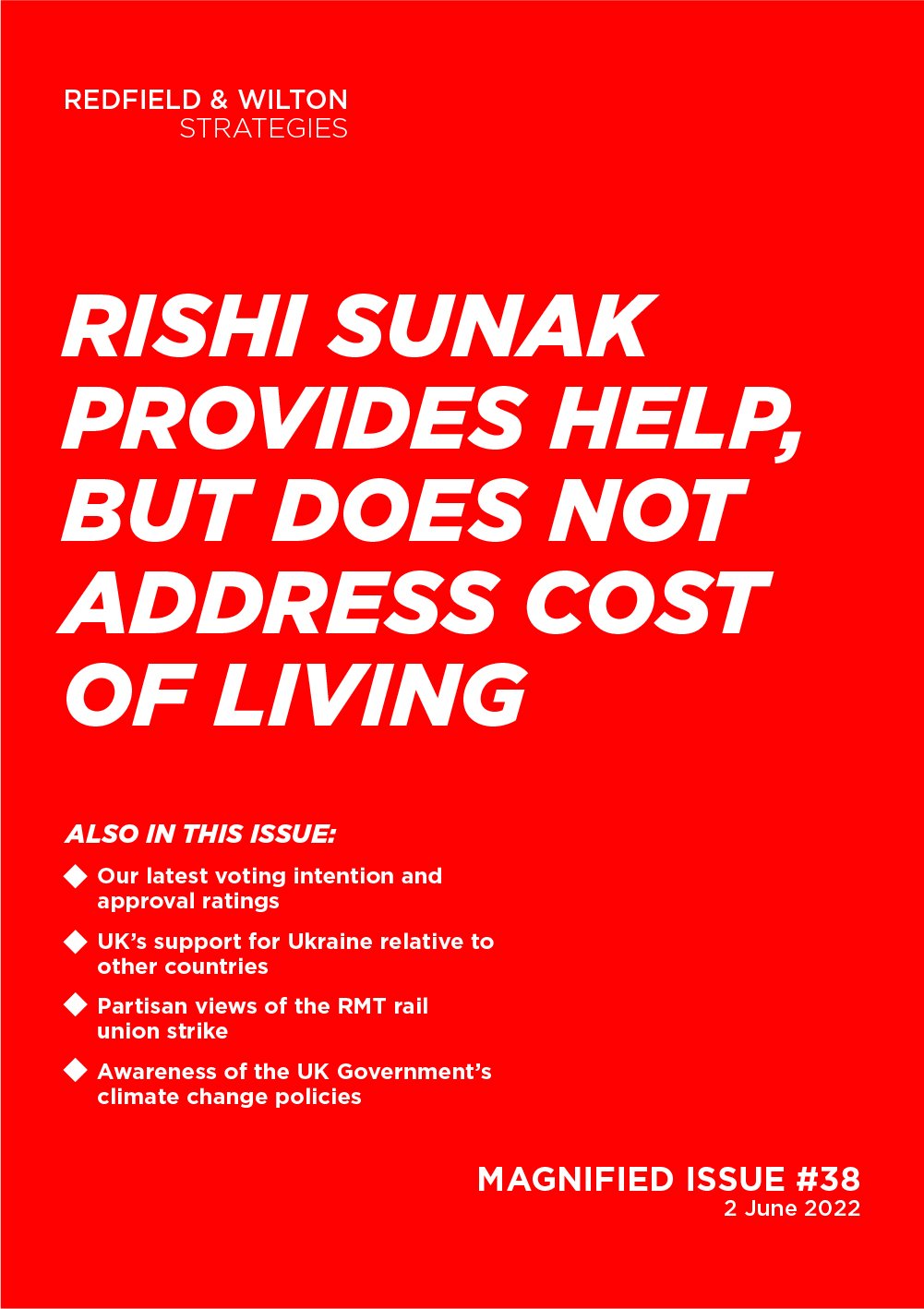 It’s time to take a look at the polls! This week’s issue of Magnified is a short one, in which we cover:

Our voting intention polling has returned to a 6% lead for Labour. Altogether, our results appear virtually the same as on 22 May, before the release of Sue Gray’s report.

Last Thursday, Chancellor Rishi Sunak announced several measures intended to help Britons amidst the cost-of-living crisis, including a purportedly ‘one-off’ windfall tax on the profits of energy companies and a number of new handouts to those struggling totalling £15 billion.

Following this announcement, Sunak’s approval rating has risen slightly from -17% and -16% last week to -11% and -12% this week. In addition, the percentage of respondents who say no, the Government is not taking the right measures to address the cost-of-living crisis has declined modestly from 70% last Wednesday to 63% this Wednesday.

In part, this lack of substantial improvement may merely be because the public is waiting to see these additional measures implemented.

But, as we have written before, there is another explanation for this lack of substantial improvement. While the Government may be taking publicly supported measures to help those struggling amidst the rising cost of living, the Government is still not taking measures that will address the root causes of this crisis.

This inaction stems from two beliefs apparently entrenched in the highest levels of this Government:

Yet, while the British public may be amenable to the explanation that external factors have contributed to the cost-of-living crisis, the public does still hold the Government to blame to a considerable extent (47% even say the crisis was preventable rather than inevitable) and, more importantly, is firmly sceptical of the claim that neither the Government nor the Bank of England can do anything to address inflation itself.

Furthermore, the pessimistic public is at odds with this Government on the question of whether inflation is short term (51% disagree, 19% agree).

As a result, even as the Government fails to see how or why it should act on inflation, the public is clearly expecting action.

As the war in Ukraine stretches onwards, divisions are emerging among Ukraine’s supporters in Europe about how to proceed. Germany and France have notably become increasingly wary of a longer-term war of attrition that will perpetuate the economic ripples of the conflict felt around the world. Olaf Scholz and Emmanuel Macron have thus increasingly pushed for peace negotiations between Ukraine and Russia.

The United Kingdom, by contrast, remains a steadfast supporter of the Ukrainian cause, wholly committed to the objective that Russia must fail and must be seen to fail in Ukraine. As a result of this deep commitment, the belief that the United Kingdom has done more than its European counterparts to help Ukraine has risen.

OUR TAKE: Rail workers that are part of the RMT Union have voted to go on strike unless their wage demands are met. The public’s views broadly follow a partisan pattern. Among those who voted Conservative in 2019, 49% are in opposition to the strike compared to 26% who support it. By contrast, 48% of those who voted Labour in 2019 support the strike while just 14% oppose it. Altogether, a small plurality of the British public (35%) say they support the strike while 29% say they are opposed to it.

OUR TAKE: The crisis of climate change has notably taken a backseat in British news. Just 17% of respondents to our polling say they have heard a significant amount about climate change in the news in the past month. By comparison, 66% say they have heard a significant amount about the cost-of-living crisis. More notably, whereas 53% of members of the British public in October, during Cop26, said they were ‘moderately’ (39%) or ‘very’ (14%) aware of the measures the UK Government is taking to address climate change, 35% the same this week (7% ‘very’ aware; 28% ‘moderately’ aware).

Rishi Sunak: bowing to pressure may sink him further
Financial Times | 29 May 2022