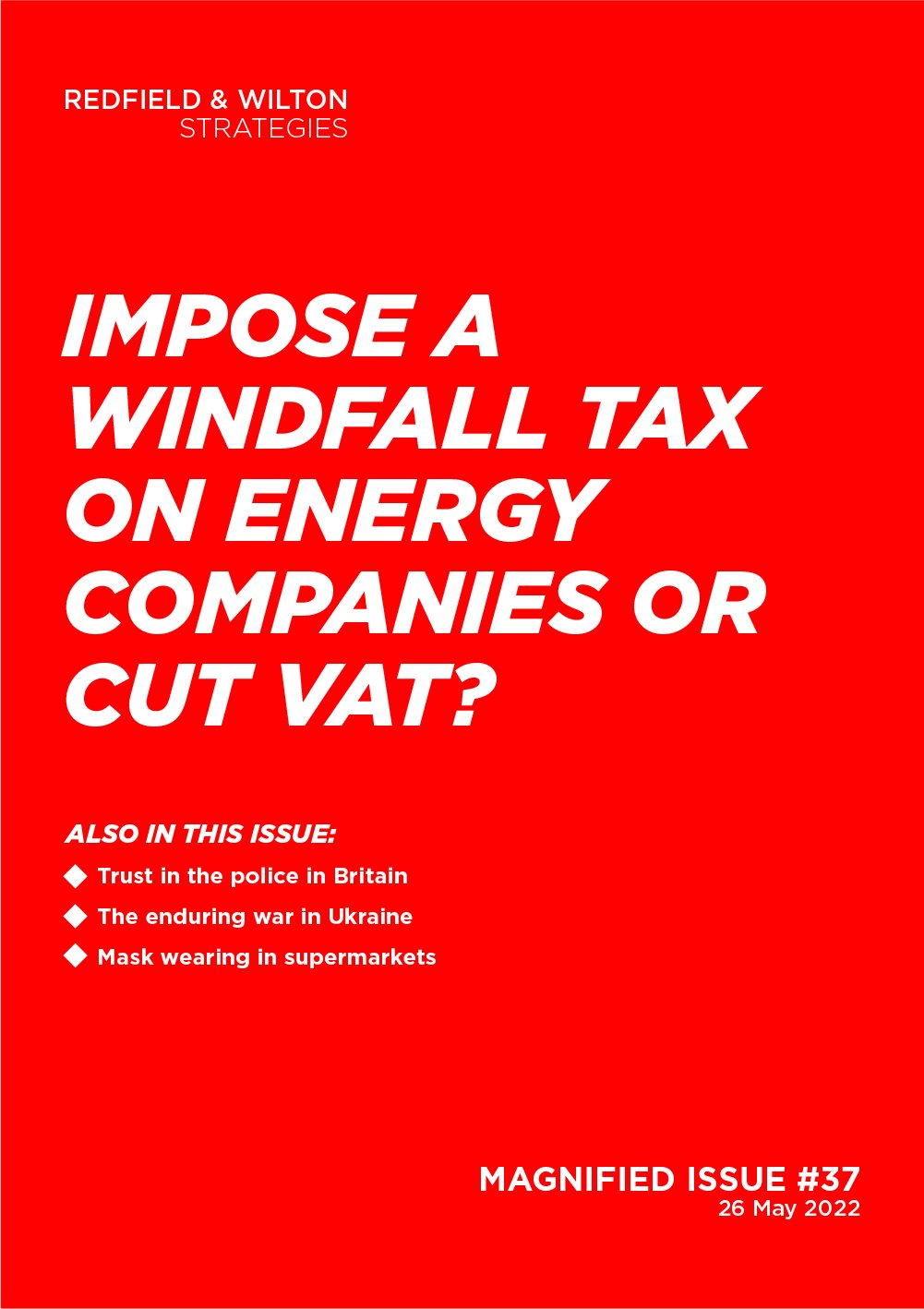 It’s time to take a look at the polls! In this week’s issue of Magnified, we take an in-depth look at the push for a windfall tax on the profits of energy companies and other proposals to address the cost-of-living crisis.

All Net Approval Ratings
(25 May):

Our mid-week poll was conducted immediately following the release of Sue Gray’s report into gatherings held in 10 Downing Street that broke coronavirus restrictions.

As such, we find Labour leading the Conservatives in British voting intention by 9%, a 3-point increase to their lead of 6% on Monday and also their largest lead since the invasion of Ukraine began. Boris Johnson’s approval rating of -28% is also the lowest it has been in the same time period, suggesting that public opinion is returning to what it was before the Ukraine war spurred a brief ‘rally-around-the-flag’ effect.

Altogether, the Labour Party is now approaching six months ahead of the Conservatives in General Election voting intention polling, having retaken the lead on 8 December 2021 when the party-gate scandal first arose.

Nevertheless, though it has rebounded somewhat in the past week, Keir Starmer’s approval rating remains negative. His approval rating has been positive only twice in the six months that Labour has led in voting intention, suggesting that the appeal of Labour, to a large extent, is in them being the primary alternative to a flagging Conservative Party.

At the same time, the Liberal Democrats have reached their highest voting intention percentage that we have recorded. On Monday, Liberal Democrat Leader Ed Davey saw a net approval rating of 0%, tied as the highest approval rating that we have recorded for him. That said, we note that only a third of respondents approved (17%) or disapproved (17%) of Davey’s performance, with the vast majority either neutral (40%) or undecided (25%).

As those who remain cautious about the pandemic may also go out to the supermarket less often than those who are no longer as cautious, we suspect that those not wearing a mask likely outnumber those wearing a mask at most supermarkets in Great Britain.

70% of Britons in yesterday’s polling say their lives have ‘entirely’ (21%) or ‘mostly’ (49%) returned to normal, i.e., something similar to what life was like before the pandemic. Younger people, in particular, are most likely to say their lives are returning to normal.

For those who say their lives have not entirely returned to normal, the reasons for this lack of a full return may have to do with permanent lifestyle changes made during the pandemic, reasons that now have nothing to do with whether one feels safe or unsafe going about regular everyday activities. Most of us at Redfield & Wilton Strategies, for instance, would be unlikely to say our lives have entirely returned to normal because we continue to work from home.

That said, a sizeable 8% of respondents say their lives have ‘not at all’ returned to normal. Members of this group likely overlap significantly with the 11% of respondents to our polling who currently say they feel ‘unsafe’ going food shopping. Though decreasing in size, the proportion of the public that remains vigilant coronavirus remains considerable.

That as many as 1 in 10 members of the public are still hesitant to return to everyday activities can explain some lingering effects of the pandemic—for instance, that there are currently more job openings in the United Kingdom than there are job seekers.

Impose a Windfall Tax on Energy Companies or Cut VAT?

In the wake of the cost-of-living crisis, Keir Starmer and his Labour Party, as well as other opposition parties, have pushed aggressively for a windfall tax on the profits of energy companies.

In other words, Starmer argued that energy companies have taken the cost-of-living crisis as an opportunity to price gouge Britons. With the public expecting prices to rise as a result of the war in Ukraine and other factors, these companies have raised prices even when they do not need to do so.

A windfall tax, the argument goes, would punish and disincentivise such price gouging and thereby reduce prices. The Government’s choice not to adopt this tax, Starmer claims, is a choice “to let people struggle when they don’t need to.”

What Starmer says has resonance with the broader public. 30% of respondents to our polling significantly blame ‘market manipulation by monopolistic companies’ for the high rate of inflation in the United Kingdom while a further 30% fairly blame such manipulation.

That said, the public is sceptical about how much a windfall tax would actually reduce fuel prices, perhaps suspecting energy companies may find creative, deceptive ways to disguise their profits or seeing other factors, such as excessive Government spending, the war in Ukraine, and supply chain issues, as the primary causes of inflation.

An alternative measure, investing in storage facilities for natural gas, which have been reduced in recent years, has virtually just as many respondents thinking it would reduce fuel prices significantly (10%) or fairly (37%).

On Government spending, the Labour Party will find it difficult to challenge the Conservative Party. 43% of the public associate ‘supports high amounts of spending by the Government’ with Labour, slightly more than those that associate the position with the Conservatives (38%).

But there is another policy that Labour can and should push for that has traction, especially in line with the public’s plurality view of Labour as favouring lowering taxes: cutting Value-Added Tax (VAT).

During the pandemic, the Government reduced VAT on a number of consumer products. Last month, however, the Government returned standard VAT for these products to their pre-pandemic level of 20%. With prices increasing, what Britons are now paying in VAT is no doubt higher than what they paid before the pandemic.

An overwhelming 70%, including 76% of 2019 Conservative voters and 77% of 2019 Labour voters, say they would support the Government reducing the standard rate of VAT from 20% to 12.5% for the duration of the cost-of-living crisis. Just 5% oppose. 66% would even support the Government scrapping VAT for consumer goods altogether.

Of course, the Labour Party can push for both policies. But if Labour is aiming to be an influential Opposition that sees its policies enacted, they would be wise to prioritise a policy that will clearly and directly reduce the burden on ordinary Britons, that sees overwhelming public support, and that would further strengthen their position as the party of lower taxes.

OUR TAKE: The war in Ukraine continues to feature significantly in British news. 51% say they have heard a significant amount (as opposed to a fair or slight amount, or nothing at all) about the war in the past month, only surpassed by the figure (68%) that says they have heard as much about the cost-of-living crisis. As the war shifts to a different phase, expectations regarding its end have changed significantly in Britain. 55% now say they expect the war to end in 2023 or later. Previously, at the end of March, only 27% of the British public expected the war to last that long.

OUR TAKE: London Mayor Sadiq Khan has asked the Metropolitan Police for greater transparency regarding its investigation into ‘party-gate,’ arguing that trust in the police would otherwise be ‘eroded.’ For the time being, trust in the police across Great Britain has declined somewhat since February, with 38% of respondents—down from 44% in February—now saying they have a positive view of the police. Altogether, 24% of respondents say they now have a more negative view of the Met Police following its investigation into ‘party-gate,’ twice the percentage (12%) who say have a more positive view. That said, a sizable 52% say their views have not changed at all.