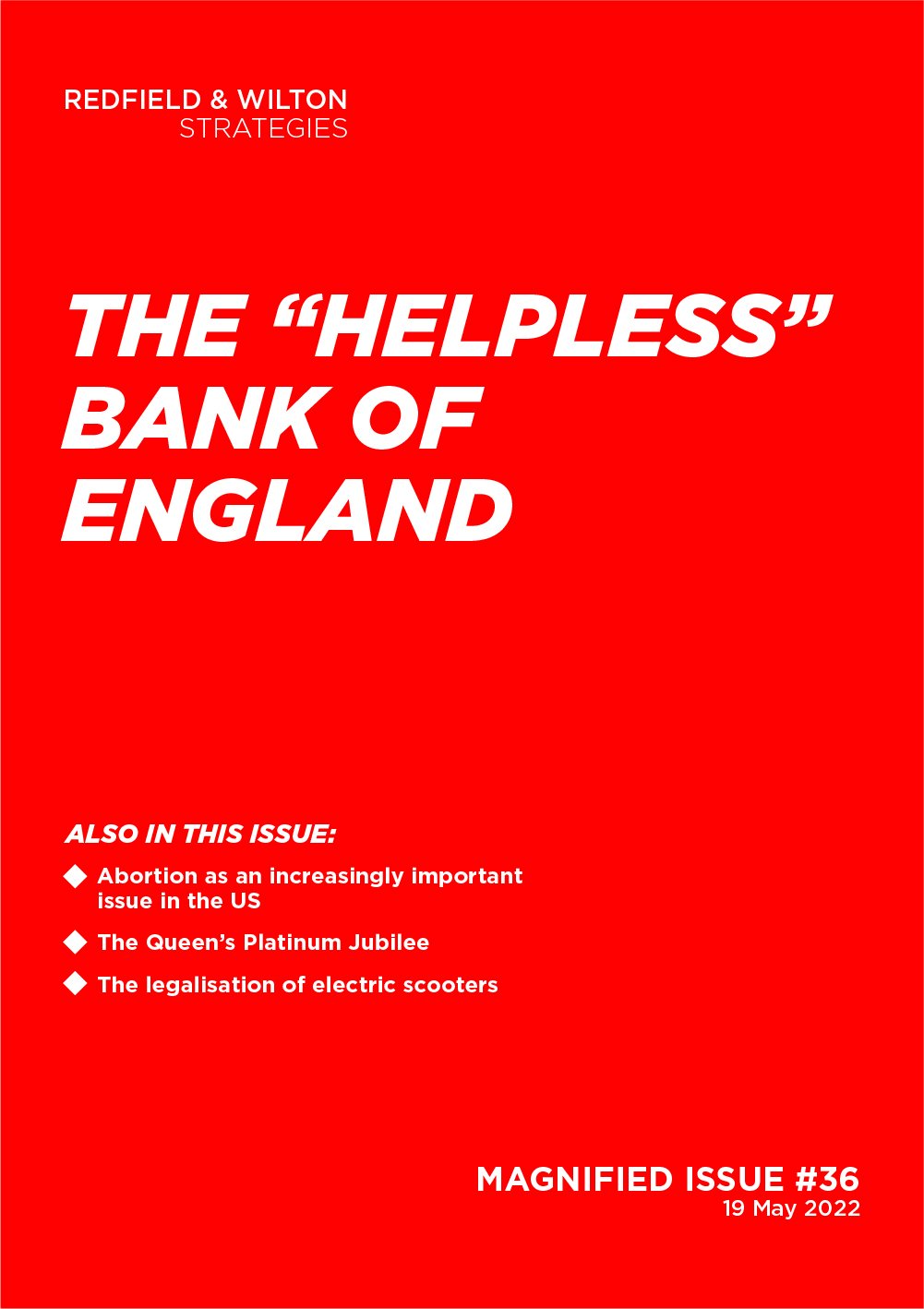 It’s time to take a look at the polls! In this week’s issue of Magnified, we take an in-depth look at the Bank of England’s avoidance of accountability for the cost-of-living crisis.

All Net Approval Ratings
(18 May):

New! Starting this week, we are releasing in Magnified the results of an additional Westminster Voting Intention poll conducted on Wednesdays. As it is always sounder to draw conclusions from a series of polls conducted over time than from a single poll on a given day, this addition will increase the reliability of our polling. It will also allow us to catch more quickly the public’s response to developments that take place during the week following our Sunday tracker poll.

Our two polls this week find the Labour Party leading by 4% and by 6% respectively. These results remain broadly in line with local elections results earlier this month.

A notable development has been the decline in Keir Starmer’s net approval rating. On the Sunday following Labour’s gains in the local elections, his approval rating registered slightly negative, at -2%.

However, following Starmer’s announcement that he will resign if Durham Police fines him for breaking coronavirus restrictions, his approval rating dropped to -9% on 11 May and stands at -11% as of yesterday. Altogether, these latest results represent his lowest approval ratings in 2022.

Yet, while the public is ten times more likely to support (61%) than to oppose (6%) Starmer’s announcement that he will resign if he is fined (being either respectful of his principled stance or cynically happy to see him go), the announcement nevertheless draws attention to Starmer’s earlier decisions to focus in on the party-gate scandal when the public has been facing the largest cost-of-living crisis since the 1970s.

In last week Wednesday’s poll, three times as many respondents (56%) said the cost-of-living crisis mattered to them a significant amount (as opposed to a fair amount, slight amount, or not at all) than said the same regarding party-gate (19%) or even beer-gate (14%).

On Tuesday this week, we conducted our first poll in the United States since the leaking of Supreme Court Justice Samuel Alito’s draft opinion that, if it were to become an official ruling of the Court, would overturn Roe v. Wade (1973) and allow individual US States to restrict abortions.

Before the leak of the Alito opinion, the coronavirus pandemic, the issue where Democrat-leaning voters have typically expressed the most approval for Joe Biden’s Administration, had clearly declined in electoral salience, having been virtually tied with the economy as the most important issue for Biden voters at the beginning of this year.

With this latest development on abortion, the Democratic Party may have something else to offer some of its past voters who are otherwise disillusioned with the Biden Administration, particularly with regard to the economy. Even so, will the Democrats be able to make abortion as important an issue as the economy for such voters if record inflation is still present in November?

The “Helpless” Bank of England

On Monday this week, Bank of England Governor Andrew Bailey appeared before Members of Parliament and declared that the central bank was “helpless” in the face of record inflation. In the view of Bailey and his colleagues, external factors have been the primary cause—80% of it, even—of the rapid increase in inflation seen this year.

In particular, Bailey stressed that the war in Ukraine, which he described as “the big one,” was the unpredictable surprise that let inflation get out of hand. In addition to the central bank, the Government, in Bailey’s view, has also been equally helpless. “I don’t think the Government has things in its hands that particularly it could do,” he testified.

Altogether, the Bank of England and the UK Government, according to the central bank governor’s testimony, are mostly not to blame for the highest level of inflation in the United Kingdom in decades.

The public, however, is not so sure about that.

55% of respondents to our polling last week agreed with the statement, “The cost-of-living crisis could have been prevented.” Just 19% disagreed. In a differently structured question this week, where respondents are asked to select whether the cost-of-living crisis was inevitable or preventable, a clear plurality (47%) say preventable—though a sizable 36% does say inevitable.

Prompted with the statement, “The Bank of England is helpless in the face of rising inflation,” 35% of respondents disagree. 31% agree. Similarly, 46% cite mistakes made by the UK Government and the Bank of England as the primary cause of the cost-of-living crisis compared to 43% who cite supply chain issues elsewhere in the world and the war in Ukraine. Hardly resounding agreement with Governor Bailey.

But, even if they may not fully understand what exactly is going on, the public can intuit that something is amiss.

Trust in the United Kingdom’s central bank has accordingly fallen significantly. Whereas 32% of respondents in October last year said they had ‘a lot of trust’ in the Bank of England, followed by another 52% who said they had ‘a moderate amount of trust,’ a slight majority this week say they have only ‘a little bit of trust’ (35%) or ‘no trust at all’ (16%) in the central bank.

This decline has transpired even as the United Kingdom has lacked, as we have mentioned previously in a comparison between Joe Biden and Boris Johnson, an earnest public debate on whether the Government or the central bank is at all itself responsible for inflation.

During the 2008 financial crisis, central banks across the West, including the Bank of England, took unprecedented steps such as quantitative easing and near zero interest rates to prevent a recession from becoming a catastrophic depression.

Classical economic textbooks have long argued that low interest rates reduce the price of money and should therefore result in the inflation of the prices of goods. Yet, inflation did not meaningfully increase amidst ultra-low interest rates. In addition, economic growth following the recession remained sluggish, altogether resulting in a paralysed Bank of England hesitant to lift its experimental policies for more than a decade.

Could the inflation we are now seeing be a delayed feedback response to the radical monetary policies implemented from 2008 onwards?

Andrew Bailey’s testimony on Monday did not meaningfully touch on this question, nor on the result of significant deficit spending by the Government during the pandemic and the years prior.

For its part, the public largely harbours no illusions that inflation will be transitory. 51% disagree that the inflation we see now is likely to be temporary and short-term. Only a fifth (19%) agree, betraying a sense among the public that no genuine attempt by either the central bank or the Government is being made to seriously curtail inflation.

OUR TAKE: The Queen’s Platinum Jubilee has attracted significant media coverage and public attention. 46% of respondents yesterday say they had heard or read a significant amount (as opposed to a fair or slight amount, or nothing at all) in the past month about the jubilee, a figure surpassed only by those regarding the war in Ukraine (55%) and the cost-of-living crisis (69%). Altogether, three-quarters of the public say they intend to celebrate the occasion in some way even if it may be merely raising a glass among friends.

OUR TAKE: Last week’s Queen Speech announced a government plan to make electric scooters legal. One perhaps expected constituency supports this change: young people. Those 18-to-24 (41% support, 26% oppose) and 25-to-34 (35% support, 29%) are more likely to support than to oppose this measure. All older age groups see plurality opposition, such that pluralities of 44% of 2019 Conservative voters and 42% of 2019 Labour voters oppose the legalisation of electric scooters.