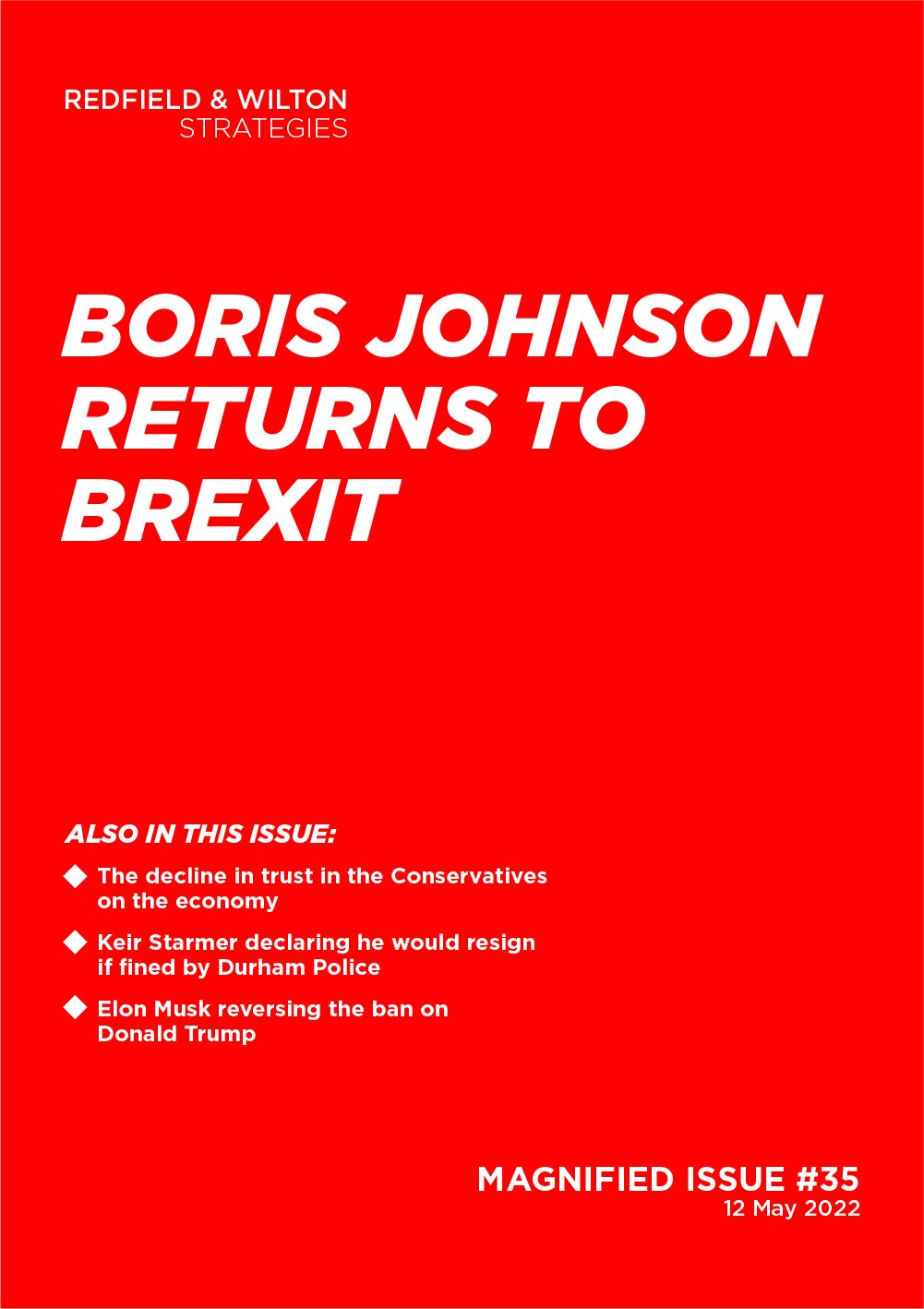 It’s time to take a look at the polls! In this week’s issue of Magnified, we take an in-depth look at Boris Johnson’s decision to return to Brexit as a central theme of his Government in the Queen’s Speech this week.

All Net Approval Ratings
(8 May):

In last week Thursday’s local elections across the the United Kingdom, the Conservatives lost nearly 500 council seats in what should be seen as a clear defeat. Results were broadly in line with our polling conducted both before and after the elections (albeit with the caveat that we poll General Election voting intention). This week’s Westminster Voting Intention poll has Labour ahead of the Conservatives by 6%—not too far off from their 5% popular vote lead according to the BBC’s national vote share calculation.

In other words, the poor results for the Conservatives in the local elections should certainly be seen as an indication of the deteriorated standing of the national party. Whatever solace the Conservatives may try to take from positive results in certain areas, on the other hand, should be approached with scepticism given that those who did vote Conservative locally are hesitant to cite approval of the national government as a compelling reason for their vote.

As we have written before, the economy is the issue that explains why the Conservatives went from positive local election results in 2021, which included winning the ‘Red Wall’ constituency of Hartlepool in a by-election, to last week’s dismal results.

In the space of a year, the Conservatives have gone from leading Labour by more than 15% on being trusted to manage the economy to being behind Labour by 10%. At the same time, the economy has become the most cited vote-deciding issue among British voters, tied with healthcare.

To be sure, ‘the economy’ is an abstract umbrella term. What respondents most likely have in mind when they now think of the state of the economy is inflation and, in particular, the effect of inflation on their lives. On this specific issue, the Government is seen by the public as taking the rising cost of living—what we consider to be the continuation of the coronavirus crisis in other forms—less seriously than it took the coronavirus pandemic.

Indeed, more than half of the public (54%) this week disagree that the Government is approaching the cost-of-living crisis as urgently as it had approached the pandemic. Just a quarter (26%) agree. On the most important issue of the day, the Government is seen as missing in action. As a result, we see the downward trend illustrated in the above chart.

In the Queen’s Speech this week, Prime Minister Boris Johnson returned to Brexit as the vision behind his government.

Among several proposed Brexit-related bills announced in the Queen’s Speech, the Prime Minister promised in particular to pass a ‘Brexit Freedoms’ Bill that would reportedly make it easier to amend or altogether remove “retained EU laws,” of which more than a thousand. Though it is unclear what laws exactly will be changed, there is a clear intent to return to what was previously a central theme of Boris Johnson’s political career.

Such a return may appear ill-advised, a desperate move amidst low approval ratings. After all, Boris Johnson campaigned in 2019 ‘to get Brexit done.’ The strength of this appeal had less to do with the merits of Brexit itself or how exactly it was being ‘done’ than to do with, in contrast to the proposed solutions to the Brexit debate by Labour and the Liberal Democrats, simply allowing the country to move forward from the issue. The 2016 referendum vote would be respected with Boris Johnson’s ‘oven-ready’ Brexit deal, and the country would be able to move on. And so, voters gave Johnson a landslide majority and moved on.

As a result, as Anand Menon and Alan Wager from a UK in a Changing Europe have argued in these pages, “re-joining the EU is simply not a plausible political threat” to now rally Conservative and former Leave voters against. 54% of the public in the latest round of our R&WS/UKiCE Brexit Tracker in April deemed it unlikely that the UK will apply to re-join the EU within the next ten years, against 23% who deemed it likely.

Brexit, now completed, should no longer serve as a wedge issue for voters. In this week’s polling, for instance, just 11% of respondents cite ‘Britain leaving the EU’ as one of three issues that would most determine how they would vote in a General Election, ranking outside the top ten most cited issues.

Is Boris Johnson racing on an old horse here? Should he not, as his campaign platform essentially promised in 2019, move on?

To be sure, the proportion of voters who are thinking about voting Conservative is smaller than the one that ultimately voted Conservative in 2019, but this reduction was, arguably, always going to happen. The 2019 General Election was an exceptional election, whereby the Conservatives were able to win big by offering voters a particular path out of a political traffic jam rather than by offering concrete policies. A number of voters who would ordinarily not be particularly attracted to the Conservative Party platform were primarily won over by this particular path forward. After clearing the political traffic jam, holding onto such voters was always going to be a Herculean task.

For the rest, a still substantial number, delivering not just on Brexit but on the promises of Brexit was a significant part of why they voted Conservative in 2019. 65% of those who voted Conservative in 2019 say being outside of the European Union primarily presents the UK with opportunities to be maximised (as opposed to drawbacks to be minimised, an option selected by 19% of this group). A similar number (63%) say the United Kingdom outside of the European Union has more control over its own affairs (as opposed to as much control or less control). These voters are going to be—or have already been—expecting more.

As such, while it will certainly not win over the entire cohort of 2019 Conservative voters, returning to Brexit will nevertheless strengthen the appeal of Boris Johnson and his Conservative Party for a number of their previous voters. The question should not be whether it makes sense for Boris Johnson to return to Brexit. On that question, our polling is clearly in the affirmative. The better question is whether Boris Johnson will successfully be able to demonstrate the positives, the return on investment, of Brexit to his voters.

In two areas, however, there has been a demonstration of the positives of Brexit to Conservative voters. 47% find the UK’s response to the war in Ukraine to have been stronger, and 54% say the UK’s response to the coronavirus pandemic was better. An overwhelming 71% of Conservative voters think the UK’s vaccination programme—the standout area of the UK’s pandemic performance—was better with the UK outside of the EU.

If Boris Johnson and the Conservatives, in returning to Brexit, deliver more equivalents of the vaccine success in other areas of policy, they may just be able to win back enough voters to win the next general election. That, if anything, is the path to a seemingly improbable 2024 victory.

But will they deliver?

Keir Starmer: I’ll quit if given Covid lockdown fine by police
BBC | 10 May 2022

OUR TAKE: Keir Starmer attracted front page headlines earlier this week in declaring that he will resign if he is fined by Durham Police for breaching coronavirus restrictions. The declaration itself is widely supported by the public: 61% support this decision by Starmer while just 6% oppose. However, amidst the broader public attention towards yet another police investigation, Starmer’s approval rating fell to -9% net on Wednesday, down from -2% net on Sunday.

OUR TAKE: Elon Musk, currently in the process of purchasing Twitter, the social media platform, declared that he would reverse the ban of Donald Trump, stating that the original ban was “morally wrong.” The British public is overall split on this decision: 30% say they support it, and 33% say they oppose it. A further 37% are neutral or undecided.