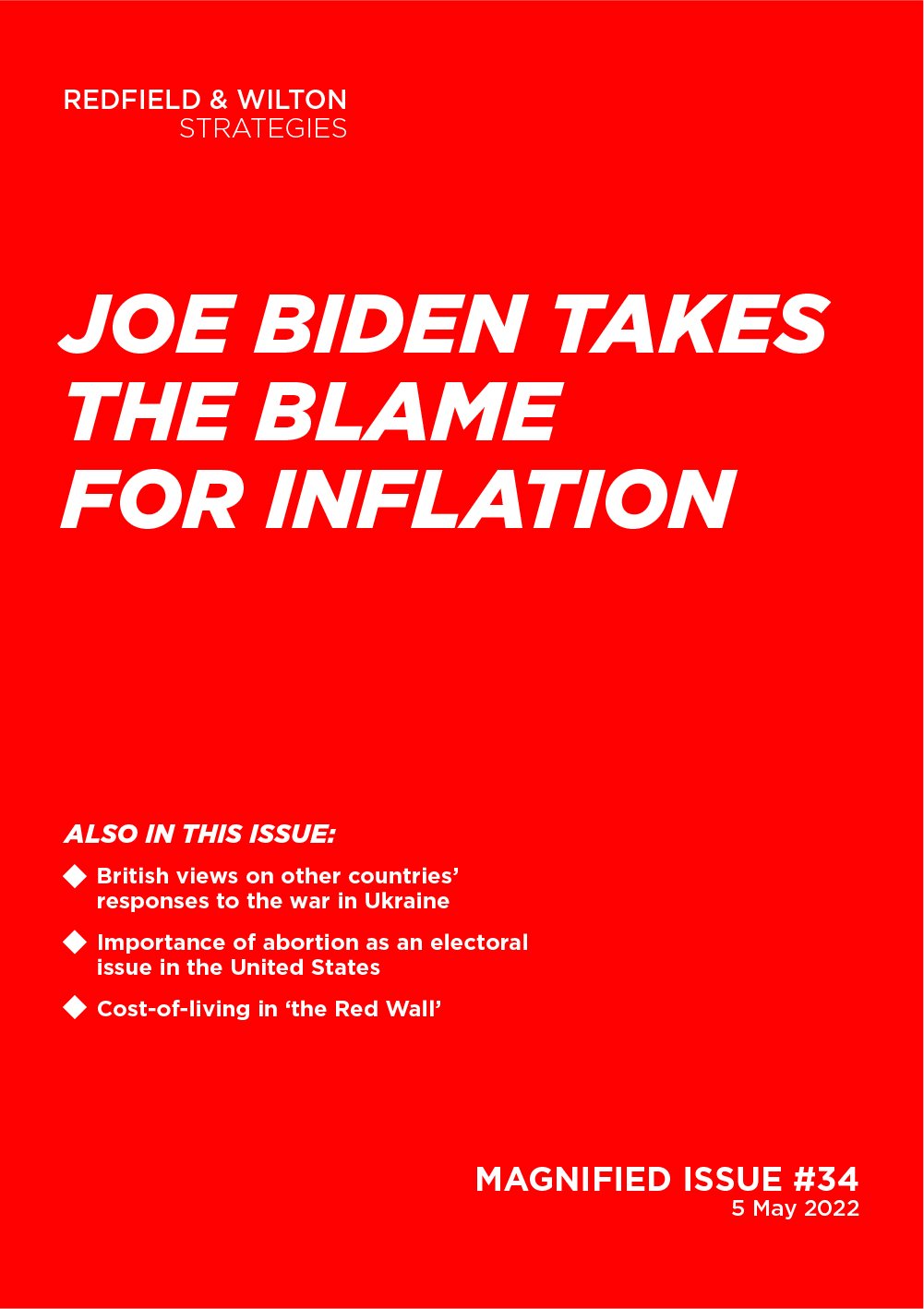 It’s time to take a look at the polls! With local elections taking place across the United Kingdom today and results not due until tomorrow morning, we focus on Joe Biden’s inflation woes in this week’s issue of Magnified.

This week, our research also covers:

All Net Approval Ratings (1 May):

In the United Kingdom, Parliament has the freedom to call an election at any given time. Though Parliamentary terms are supposed to last five years, there have been elections in 2015, 2017, and 2019. As a result of this variance, British pollsters track the public’s voting intention for a hypothetical general election, however unlikely a general election may appear to be. Tracking this question has become the primary means by which pollsters typically measure the political mood of the British public.

For the United States, the nature of the fixed terms of presidents and the importance and unpredictability of the specific candidates on the ballot makes this form of tracking the political mood uncommon. Instead, American pollsters typically measure Presidential approval.

However, for the duration of this presidential term, measuring 2024 Presidential voting intention may be a better means of measuring the American political mood than overall presidential disapproval.

The United States has had a repeat election, where the top two major candidates on the ballots are the same as in the previous election, only six times in its history (1800, 1828, 1840, 1892, 1900, and 1956). Nevertheless, both Joe Biden and Donald Trump have thus far clearly hinted at their intention to run again in 2024. With current polling indicating that a clear majority of Republicans and Democrats would respectively renominate their 2020 candidates, they are the favourites for the Republican and Democratic nominations—though, of course, much can change.

As we know in Britain, measuring approval alone misses key aspects of the body politic. Boris Johnson’s net approval rating has at times been negative when the Conservatives have led in voting intention. Voters’ dislike of Johnson can be outweighed by other factors such as Conservative party loyalty, a greater dislike of or lack of enthusiasm for the opposition parties and/or their leaders, a preference for a local Conservative candidate, policies on offer, and so forth.

Likewise, Joe Biden was elected in 2020 primarily because he was not Donald Trump. He offered Americans a break. Present disapproval for Biden (-8%), while notable, does not quite express the significance of the public’s shift in mood. Voters could dislike Biden and still prefer him over Trump. That Donald Trump presently leads Joe Biden by 4% in national voting intention (i.e., the popular vote, which Biden and Clinton had won by 4% and 2% respectively) therefore indicates that something has truly changed.

The percentage of Britons who say they have a favourable view of Poland has risen from 40% on 20 February to 48% on 19 April, a greater positive shift in favourability regarding any country other than Ukraine itself (which shifted from 25% favourable to 59% favourable).

This change in views on Poland is a clear consequence of the help Poland has extended to Ukraine and its citizens in the wake of Russia’s invasion, particularly in accepting refugees and serving as the primary corridor for weapons and other assistance being sent to Ukraine. Altogether, 40% of respondents to our polling at the end of March said that Poland had done the most of any country to help Ukraine, more than double the percentage that cited the United Kingdom (16%).

“…these people have been so hard on you, which I don’t get. I really don’t. I think ever since you’ve come into office, things are really looking up. Gas is up. Rent is up. Food is up. Everything.” — Trevor Noah to Joe Biden at the White House Correspondents’ Dinner, 30 April 2022.

Inflation and the resulting cost-of-living crisis, like in Britain, is driving the American public’s disfavour towards their government but in a way that is different than what we see here.

In March, consumer prices had risen in the United States over the previous twelve months by 8.5%, slightly higher than the already ghastly 7% figure in the United Kingdom—both of which are the highest rates recorded in either country in decades.

And there is no sense inflation will stop anytime soon. 58% of Americans in our national polling expect inflation to worsen (as opposed to improve or stay the same) over the next three months.

More significantly, Americans clearly blame their government for this development. 50% say they do not believe the US Government is taking the right measures to address the current high rate of inflation, compared to 26% who do believe so, and 61% agree with the statement, “The Government and the Treasury have lost control over inflation.”

Attribution of responsibility to the government for inflation is, in fact, greater than in Britain. 31% of Britons say Prime Minister Boris Johnson is significantly to blame for the high rate of inflation in the United Kingdom (as opposed to fairly, slightly, or not at all). By contrast, 35% say so regarding the coronavirus pandemic and Russia’s war in Ukraine. Altogether, the British public is amenable to seeing other factors, factors beyond the Government’s control, as significantly contributing to the current increase in prices.

In the United States, the debate appears directed towards responsibility and blame. In other words, what is the Government doing to stop the inflation which it has caused?

Though Americans do see external factors as contributing to this economic situation, there is a greater tendency to lay the blame at President Biden’s feet. 43% of voters in Florida, 42% in Arizona, 40% in North Carolina and Pennsylvania, and 38% in Ohio and Texas say Joe Biden is significantly to blame for the high rate of inflation in the United States. Fewer proportions in these states comparatively say the same regarding the pandemic (27% to 35%) or the war in Ukraine (26% to 32%).

As such, when asked if they think inflation would be better, worse, or the same under a President Donald Trump, 47% of voters in Florida, 46% in Ohio and North Carolina, 43% in Pennsylvania and Texas, 42% in Arizona, 41% in Georgia, 40% in Wisconsin, and 39% in Michigan—all clear pluralities—say better. Meanwhile, clear pluralities in all US states polled also say President Trump and his policies are not at all to blame for the current high rate of inflation in the United States.

To some extent, such interpretations may be merely partisan. After all, Donald Trump increased government spending, particularly deficit spending, during his term in office. Trillion-dollar spending packages during the pandemic were also openly supported by the then President. Such spending which predates the Biden administration no doubt contributes to the present inflation figures.

However, inflation did not spike during Trump’s tenure. Moreover, with the Government having approved additional trillions of dollars in spending since Joe Biden came into office and with Senator Joe Manchin drawing national headlines last summer for setting a maximum limit of only $1.5 trillion on Democrats’ failed Build Back Better bill, a clear association has been made in the minds of the American public between high spending, which does cause inflation, and Joe Biden’s Democratic Party.

The contrast between a Republican President who very recently presided over a strong economy with little inflation and a Democratic President who sees the highest inflation in decades sets the political debate in the United States distinctly apart from that in Britain, where the leading opposition party oversaw a major financial crisis when it was last in power.

While Governments in both the UK and the US are suffering from inflation woes, the ensuing political debates are different in each country. This November, Americans will be looking at what the Government has done to address inflation more so than whether the Government has supported its citizens amidst inflation.

Can the Democrats rise to the occasion?

OUR TAKE: Boris Johnson responded poorly to an interview question earlier this week regarding a lack of support for a struggling pensioner. His response revealed much of what the public thought already: an overwhelming 73% of voters in the ‘Red Wall’ polled on Tuesday say they do not believe the Government is taking the right measures to address the cost-of-living crisis.

OUR TAKE: This week’s bombshell news is the leak of a draft opinion by the Supreme Court that, were it to be the final ruling, would make it possible for US States to prohibit abortion. Abortion was already a significant political issue prior to this latest news revelation. In our state-by-state polling conducted in late April, 21% to 27% of respondents cited abortion as one of the issues that would most determine how they would vote in November 2022, making abortion one of the top five most cited issues in most states. Again, this was before this week’s news story.

What does Great Britain make of the Northern Ireland Protocol?
UK in a Changing Europe | 3 May 2022