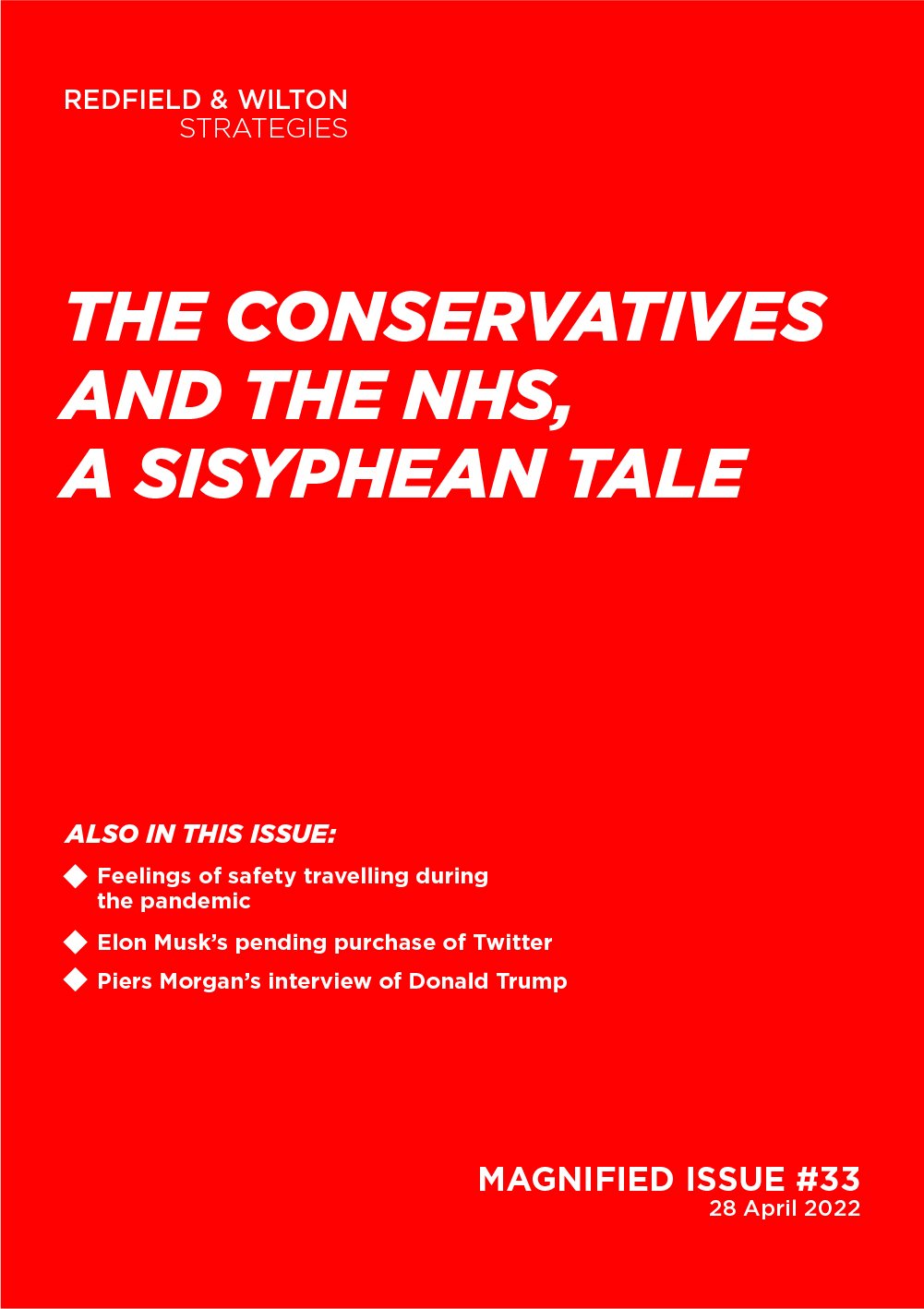 It’s time to take a look at the polls! In this week’s issue of Magnified, we take an in-depth look at the Conservatives’ inability to gain the public’s trust on the NHS.

For the third week in a row, Labour leads the Conservatives 42% to 34% in our national voting intention polling.

In our polling this week, we asked respondents who had voted Conservative in 2019 but who do not presently state an intention to vote Conservative to identify the policy area where the Government’s performance had most disappointed them and had lost their vote. 35% cited the economy, 20% the NHS, 14% the coronavirus pandemic, and 10% immigration.

Altogether, 45% and 48% say the Government’s performance, respectively, on the economy and on the NHS significantly explain (rather than fairly, slightly, or not at all) why they no longer vote Conservative. Another 33% and 27% say so regarding immigration and the coronavirus pandemic.

Though the coronavirus pandemic has subsided and has thus become divorced from the Conservative Party’s voting intention results and approval ratings, the coronavirus crisis continues in other forms, as we wrote in last week’s Magnified. In particular, the rising cost of living and the backlog of cases in the NHS are now the primary sources of dissatisfaction with this Conservative Government.

If we are looking for a reason why Labour continues to lead the Conservatives by a margin that, if replicated in an election, would swing the national vote by close to 20 points from the 2019 General Election, it is the lack of urgency the UK Government appears to—if not actually—devotes to addressing the continuation of the coronavirus crisis in other forms.

Of all the industries negatively affected by the coronavirus pandemic, the airline business ranks among the worst affected. That may slowly be changing with an increasing number of Britons now feeling it is safe to travel. This week, Heathrow, the UK’s busiest airport, updated its passenger forecast for 2022 from 45.5 million to 52.8 million. 9.7 million passengers have already passed through the airport in the first three months of this year.

Per the ONS, 70% of England has had covid in the past two years (since 27 April 2020). With so many having had the virus already, the primary concern for Britons thinking about travelling may now have more to do with affording travel costs amidst a cost-of-living crisis or navigating covid restrictions elsewhere, than whether it is safe or not to travel.

The Conservatives and the NHS, a Sisyphean Tale

The modern British politics version of the myth of Sisyphus is the Conservative Party’s attempts to gain the public’s trust on the NHS.

Even more, about twice as many disapprove (50%) than approve (26%) on the Government’s performance on the NHS. This approval rating of -24% is only surpassed, slightly, by disapproval on immigration (-27%).

These are dire figures on what is a critical issue for voters in Great Britain. 54% this week cite healthcare as one of the three issues that would determine how they would vote in a General Election. Respondents cite only the economy (57%) with greater frequency, and even then, the difference is marginal.

Yet, this dismal performance is not for a lack of trying on the part of the Conservatives.

Beginning with his post-election victory speeches in December 2019, Boris Johnson has consistently claimed the NHS to be one of his Government’s top priorities. Indeed, the latest increase in national insurance tax, which Rishi Sunak has earnestly wedded himself to despite the public’s opposition to it, is intended to further fund the NHS and social care system in the United Kingdom.

Last year, in September, Health Secretary Sajid Javid announced a record level of annual spending into the NHS: £36 billion. In the weeks and months that followed, however, his approval rating hardly changed, fluctuating ever so slightly between -5% and +5%. There was no record NHS spending bump in approval.

In actuality, a plurality (32%) of respondents say they think Boris Johnson’s government has decreased rather than increased (29%) spending on the NHS. When prompted with a statement asserting that the UK Government under Boris Johnson has allocated more money to the NHS in its annual budget than any previous UK Government, equal proportions of respondents (34%) identify the statement as true and false. Another 32% say they don’t know.

For all their effort and dedication on the NHS, the Conservative Party fails and fails to garner any credit. Instead, more than twice as many respondents to our polling in the ‘Red Wall’ associate ‘supports more spending for the NHS’ with the Labour Party (45%) than with the Conservative Party (19%). And so, the Sisyphean boulder rolls back down the hill.

In large part, this mismatch indicates the extent to which spending figures, especially large, substantial ones such as £36 billion, are too abstract for the public. No one sees a lump of cash or Treasury bills being shipped to every hospital in the country. When paid for by the Government, the cost of healthcare is invisible to the public. Rather, the public only knows the quality and promptness of the care they receive.

In short, people respond to their lived experience. With inflation, other pandemic costs, staff pay rises, enormous backlogs, and an overwhelmed staff having gobbled up whatever additional spending has been allotted to the NHS, the public only sees a healthcare system that has worsened in the last two years.

Whereas 67% in June 2020 thought the UK Government had done a ‘good job’ in expanding NHS hospitals to prevent them from being overwhelmed, that figure has been reduced to 44% last week. The figure that thinks the Government has done a ‘bad job’ has risen from 13% to 33%. 44% of 2019 Conservative voters in the ‘Red Wall,’ say Boris Johnson and his Government have ‘gotten it wrong’ on the NHS, only slightly less than the percentage that says they have ‘gotten it right’ (48%).

That said, even given these negatives, our polling figures nevertheless demonstrate a clear communication failure by the Government in conveying just how much it has committed to the NHS. Whether the public is always going to be suspicious of the Conservatives on the NHS is a fair question, but the public should still know that the Government is spending more for the NHS than any previous Government in history.

Above all, this cautionary, Sisyphean-like tale should make clear that spending figures alone cannot and will not move a sceptical public. The public will only respond to results.

OUR TAKE: The British public is largely not yet certain what to make of Elon Musk’s purchase of Twitter, which is expected to be executed over the next six months. A sizable 47% express a neutral opinion regarding the looming purchase, and 14% say they are undecided. Meanwhile, 21% approve of it, while 17% disapprove. Among those who say their primary source of news is Twitter, 30% approve and 23% disapprove.

OUR TAKE: When presented with the information that Piers Morgan aired an interview with Donald Trump for his first show on TalkTV, 29% of British respondents say this information makes them more likely to watch TalkTV in the future. 25%, on the other hand, says this information makes them less likely to watch the new upstart television news channel. Altogether, 12% of members of the public say they had heard a significant amount regarding Piers Morgan’s interview with former US President Donald Trump.