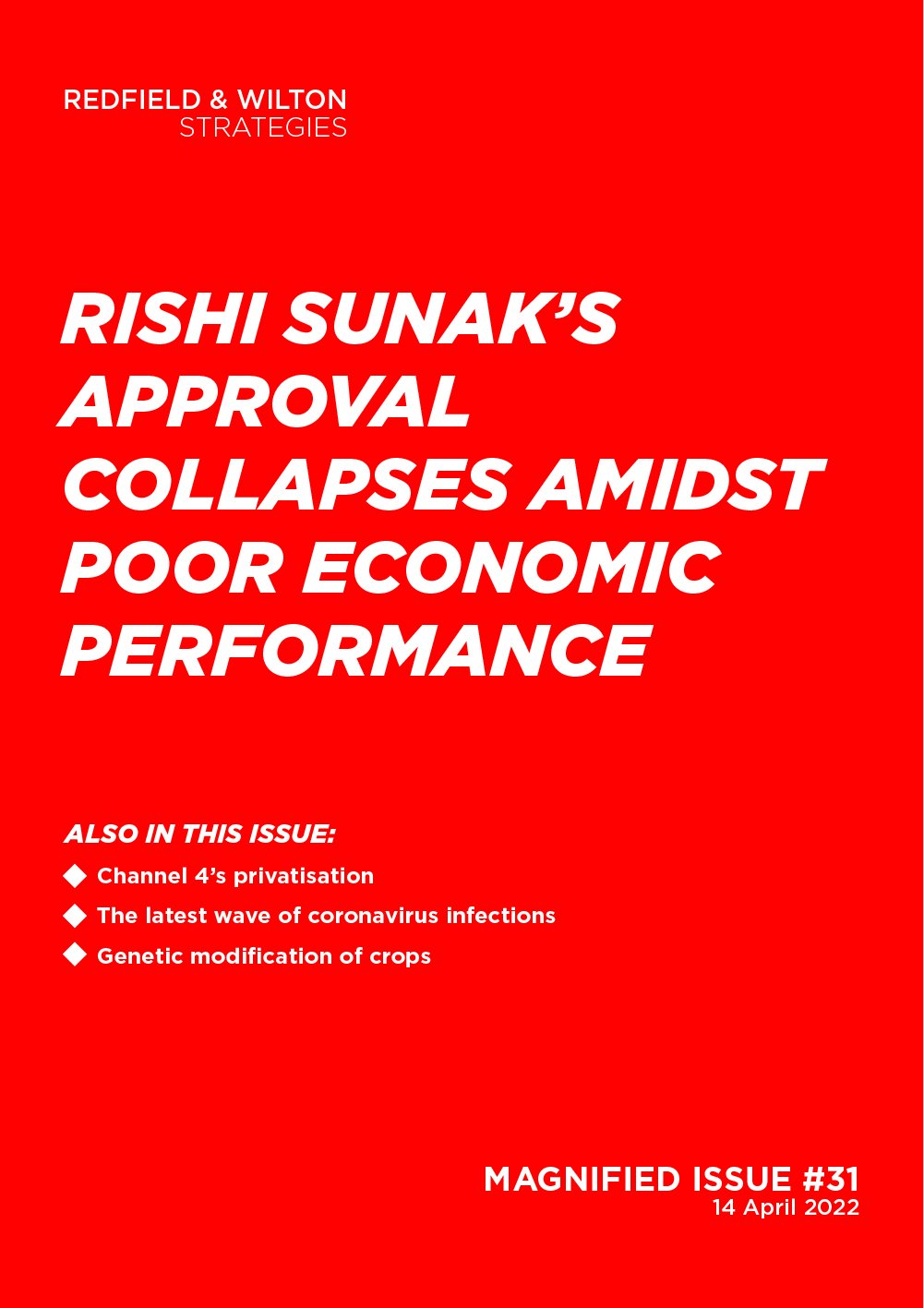 It’s time to take a look at the polls! In this week’s issue of Magnified, we take an in-depth look at the Government’s performance on the economy and the collapse of Rishi Sunak’s approval.

As of Sunday, Boris Johnson’s approval rating stands at -23%. With our polling having been conducted prior to Tuesday’s revelation that the Prime Minister has been fined by the Metropolitan Police for breaking coronavirus rules, his approval may decrease further still. For context, his lowest ever net approval rating of -31% was recorded during the height of ‘party-gate’ only a few months ago.

The Prime Minister had attracted widespread, global attention this past weekend with a visit to Ukraine, where he walked the streets of Kiev alongside Ukrainian President Volodymyr Zelenksy. For his performance on the Ukraine crisis, Boris Johnson currently receives a net approval of +26% among members of the British public—the polar opposite of his overall approval rating.

The discrepancy between Johnson’s overall approval rating and his approval on Ukraine in particular indicates the extent to which the foreign crisis outweighs domestic political concerns: not much. Indeed, just 8% of respondents to our weekly polling say foreign policy would be one of the three foremost issues that would determine how they would vote in a General Election, a figure dwarfed by numerous domestic political issues (more on this below).

As such, even as few (22%) believe that Keir Starmer would have responded to the war in Ukraine better than Boris Johnson has, the Leader of the Labour Party has benefitted from domestic turmoil at home and has regained his lead as being the one who would be the better Prime Minister for the United Kingdom at this moment: 38% to 35%.

In late March and early April, the rate of covid infections in the United Kingdom reached its highest point so far, spurred by the BA.2 strain of the Omicron variant. At Redfield & Wilton Strategies, this latest wave afflicted some members of our team such that most of us have now contracted covid at some point or another—some of us more than once.

Though the pandemic is no longer frontpage news every day, this latest wave appears to have nevertheless affected public opinion. The sentiment that the Government is taking the right measures to address the pandemic has decreased from a majority position in early March (52%) to a narrow plurality position this week.

In contrast to the end to all coronavirus restrictions in England towards the end of February, there are now calls for the Government to reintroduce rules or advice on vaccinations, mask wearing in public transport, and testing.

However, even as the public may grow wary about the Government’s current relaxed stance, feelings of safety among the general public have not meaningfully changed in the past month. For instance, whereas 78% of employed or self-employed respondents on 7 March said they would feel safe going to work, 76% said so again on Sunday—a difference that is well within the margin of sampling error. Likewise, 80% currently say they feel safe going food shopping, a figure that is only 2% lower than the 82% who said so a month ago. As a consequence of this lack of change in people’s behaviour, there is likely to be little change in the Government’s policy position.

The golden catchphrase of Bill Clinton’s 1992 winning Presidential campaign, a fabled truism at this point, provides the most incisive analytical point for the faltering position of the Conservative Party. More than the party-gate scandal, the war in Ukraine, the pandemic, or various other leaks and gossip coming out of Westminster, it is economic pain currently felt by the British public that is hurting this Government in the polls.

Polling this week has found 54% of members of the public saying their finances have worsened in the past year. 62% meanwhile expect their finances to worsen over the next year. Large majorities of respondents say they have noticed increases in the prices of groceries (86%), fuel (81%), and heating (79%), and nearly 9 in 10 respondents report having cut back on numerous expenses. Inflation, reportedly standing at 7%, the highest in 30-years, has clearly reached the public.

As a consequence, the importance of the economy as an election-deciding issue has risen by more than half in the space of nine dizzying months. 38% of respondents to our polling in July 2021 cited the economy as one of the top three issues that would most determine how they would vote in a General Election. This week, that figure is 57%.

The percentage of respondents citing taxation alone, a segment of the various policies that make up a government’s economic policies, has doubled from 12% to 25%. Barring one occasion, this specific policy area has been ranked among the top five issues cited by voters every week for the past two months.

Such an increase in importance in the economy and in taxation in particular can hardly spell good news for the Conservative Party. To state the obvious, few cite taxation as a vote-deciding issue when they think taxation is too low. Instead, taxation has become one of the areas where Boris Johnson’s government is least trusted. 50% of the public say they do ‘not at all’ trust Boris Johnson’s Government on taxation. Just a quarter, by comparison, say they only ‘fairly’ (17%) or ‘significantly’ (7%) trust the Government on this issue.

And the public has good reason to be sceptical about Conservative claims about being a tax-cutting party. Chancellor of the Exchequer Rishi Sunak attracted much attention in increasing national insurance contributions, a measure which a clear majority of the public opposes (52% to 27%). In their 2019 election manifesto, the Conservative Party had promised no increases to national insurance contributions. Will voters ever be able to trust them on this pledge again?

Altogether, despite having asserted himself to be a tax-cutter, Rishi Sunak has on the whole increased taxes for the British public during his time as Chancellor of the Exchequer. As his latest tax changes came into effect this month, he has been rewarded with his first ever negative approval ratings, first at -5% and now at -12%. In July 2021, when fewer cited the economy and taxation as vote-deciding issues, Sunak’s approval rating had stood at +35%.

Beyond taxation, approval for the Government’s performance on the economy, which was mostly positive last summer, now registers at -21%.

In short, the Government is seeing significant disapproval and distrust on two of the issues that are increasingly cited as the most important issues for voters thinking about how to vote in a General Election.

This week’s headlines have been dominated by the latest fines issued to Boris Johnson in the wake of party-gate. Whether the fervour and public anger towards Johnson will match the level of anger seen before the war in Ukraine shifted the public’s attention remains to be seen, but it is clear that, on the key issue that matters most to voters, Johnson’s Government is doing decisively worse than it was in January.

Some have cited the precipitous decline in approval for Chancellor Rishi Sunak as favourable to Boris Johnson. Whereas Sunak was the clear potential successor to replace Johnson in January/February, there is now no clear favourite among the Conservative MPs as to who should succeed Johnson if he were to go. His position as Prime Minister may thus appear more secure despite the latest revelations.

Yet, surely, leaving aside considerations of the internal battles within the Conservative Party, the decline in popularity of Rishi Sunak is a very bad thing for Boris Johnson. A Government whose Prime Minister and Chancellor are both deeply unpopular is surely worse than a Government whose Chancellor is still viewed favourably. Whatever short term gain Johnson may accrue from this development should thus be moot.

It turns out that Rishi Sunak has done the most damage to Boris Johnson not by seeking to upstage him but by falling apart entirely.

OUR TAKE: In the aftermath of the Government’s decision to privatise Channel 4, commentary has been quick to point out that the public does not support this measure. While, yes, those who oppose Channel 4’s privatisation outnumber those who support it, the overall number of respondents who say this change matters to them significantly is exceedingly small (7%). Moreover, most respondents express either a neutral (41%) or undecided (23%) position when it comes to Channel 4’s privatisation.

Polling shows Partygate fines are having an impact on Boris Johnson, but not as much as opponents hope
iNews | 12 April 2022

Will Rishi Sunak be forced out over wife’s tax status crisis?
The Times | 8 April 2022