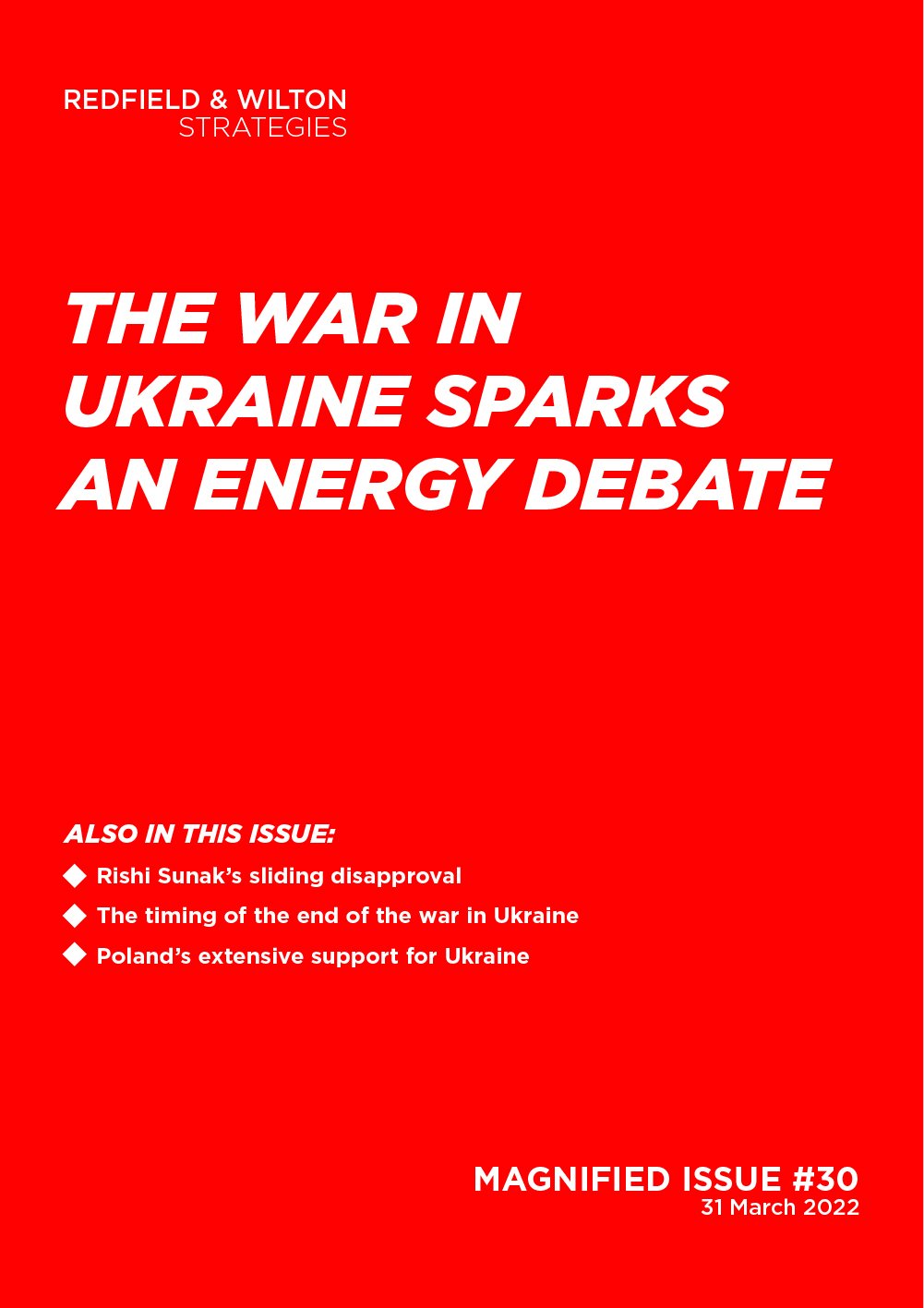 It’s time to take a look at the polls! In this week’s issue of Magnified, we take an in-depth look at how the war in Ukraine has forced a re-think on the UK’s energy policies.

This week’s voting intention has seen the Labour Party’s lead over the Conservative Party drop from 5% to 2%. 37% (-3) say they would vote Labour in a General Election, while 35% (–) say they would vote Conservative. In addition, Boris Johnson’s net approval rating has shifted from -15% to -8%—almost entirely reversing an 8-point decrease in approval in the previous two weeks.

Rishi Sunak, who appeared in his Spring Statement last week willing to embrace temporary unpopularity in the hopes that the economy will improve enough by 2024, sees his net approval rating continuing to slide downwards. This week’s polling registers his approval at +1%, his lowest to date.

Indeed, between Rishi Sunak and Boris Johnson, only 20% of 2019 Conservative voters now say Sunak would be the better Prime Minister for the United Kingdom at this moment—the lowest figure to say so since 31 May 2021.

As the party-gate scandal once again rears its head this week, with the Metropolitan Police having issued its first fines on Tuesday and Sue Gray’s full report still in the docket, these latest figures are significant. If Boris Johnson’s position as Prime Minister comes under threat as a consequence of party-gate or something else, Rishi Sunak is no longer the clear favourite to succeed him—an important distinction between January and now.

What effect this difference may have on the likelihood of a vote of no confidence against Boris Johnson or its outcome is unclear. On the one hand, some Conservative MPs unhappy with Johnson’s performance in January may have begrudgingly stuck with Johnson due to a view that a Sunak Premiership would have been worse, or at least no better. Without Sunak as the clear alternative, the spotlight can focus solely on Johnson. Disparate opponents of Johnson, with different preferences for Johnson’s successor, can now unite to oust the Prime Minister.

And yet, the lack of an alternative for Johnson’s opponents to rally around also means that Conservative MPs opposing Johnson remain disorganised. Rather than inviting MPs to imagine a variety of possibilities, the question of “If not Boris, then who?” could instead be a daunting one.

When Will the War in Ukraine End?

It has now been more than a month since Russia’s invasion of Ukraine began. As the war continues to be waged, expectations about the timing of the war’s end have only slightly shifted.

While a third of the public on 9 March thought the war would end by April or May, including a tenth who thought the war would end in its first month, just 15% now predict the war to end this spring. Instead, a third, up from 19% a few weeks ago, see the conflict ending this summer, sometime from June to August. Nevertheless, the total percentage of respondents who expect the war to end by August has only changed marginally from 52% to 49%.

In the early pages of The Black Swan, Nassim Nicholas Taleb relates how his friends and family members who fled the civil war in Lebanon expected, over the course of seventeen years, to imminently return to their home country, continually believing that the war would end “only in a matter of days.” Likewise, when World War I started in 1914, many Britons assumed it would to be over ‘by Christmas.’ Many Americans initially expected the Battle of Bull Run in 1861 to be the decisive conflict of the American civil war.

With regard to the conflict in Ukraine, will the British public also prove susceptible to this ‘duration blindness’?

Last week, we discussed, through the lens of the forced sale of Chelsea F.C., how the war in Ukraine has revealed a willingness among a clear majority of the British public to adopt a more moralistic approach to trading policy. The public’s overwhelming support for sanctions on Roman Abramovich (whose role in the ongoing conflict has become even stranger in the past week) is emblematic of the public’s longstanding desire for the UK’s economy not to be complicit in human rights violations elsewhere in the world.

Nowhere are the implications of this revealed preference more significant than with respect to energy. For decades, the West has purchased vast amounts of oil and gas from countries such as Russia, Saudi Arabia, and Venezuela, whose totalitarian governments have, in turn, wielded power over their respective populations through their control of these very resources. If there is a sector where western economies, including that of the United Kingdom, have been most complicit in human rights abuses elsewhere in the world, it is energy.

However, in the wake of the conflict in Ukraine and the economic sanctions placed on Russia, that may be changing despite—or maybe because of—the steep increases in energy bills across the United Kingdom.

While 32% of the British public significantly blame Russia’s war in Ukraine for the high rate of inflation in the United Kingdom, a figure only matched by the coronavirus pandemic, this apportioning of blame has apparently not dampened the public’s enthusiasm for sanctions against Russia.

The public even shows a willingness to take things further. 70% say they would support the United Kingdom banning the importation of Russian gas and oil as long as there is war in Ukraine. 49% agree and 22% disagree with the statement, “If it helps save Ukraine, I am willing to pay higher fuel prices.”

Compared to 9 March, these figures have changed only slightly, if at all. In that poll, conducted when the conflict was not yet two weeks old, 78% said they supported the sanctions imposed against Russia, 59% said they thought the sanctions could be maintained ‘for a long time,’ and 53% thought the UK and its allies could inflict more damage to Russia’s economy than Russia could inflict on the economics of the UK and its allies.

Admittedly, enthusiasm for taking things further has dampened somewhat. A few weeks ago, 58% agreed and 14% disagreed with the statement regarding a willingness to pay higher fuel prices. Net agreement has thus dropped from +44% to +27%. Even so, the continued preference for maintaining economic pressure against Russia and possibly ramping up that pressure is still clear. The decoupling of the Russian economy from the West thus appears likely to be enduring.

At the same time, the public is also ramping up pressure on the UK Government. We have mentioned Rishi Sunak’s declining approval above. More specifically, net approval for his Spring Statement, released last week, registers at -15%. An overwhelming 80% of the public say, no, the UK Government is not doing enough to address the coming rise in energy bills.

While, yes, the public readily supports sanctions on Russia and apportions significant blame for inflation to the war in Ukraine, the Government will find it difficult to deflect responsibility for higher energy prices solely to Vladimir Putin. Members of the British public will suffer damage to their finances, and they will subsequently express their anger at the ballot box.

As such, similar to what the sale of Chelsea F.C. may mean for English football, the United Kingdom’s sanctions against Russia may mark a turning point with respect to energy policy in the United Kingdom. Alternative solutions, particularly solutions whereby the UK is not reliant on foreign imports from ruthless regimes such as Russia, are urgently needed.

The Government appears poised to push further on renewable energy, in particular on nuclear, with Boris Johnson having met with nuclear energy leaders this week. Such a change in policy would mirror a rise in support for nuclear in the United Kingdom in the past year. In a poll conducted in April last year, 31% said they would support and 34% said they would oppose more nuclear power stations being in the United Kingdom. This week, support now registers at 42% with opposition at 26%—a notable shift. Among Conservative voters, support has risen from 38% to 51%.

That said, the Prime Minister will find NIMBYism difficult to overcome. While there is plurality support for nuclear power plants being built in the United Kingdom, there is plurality opposition to nuclear power plants being built in respondents’ local areas. Though still down from 49% last year, a considerable 40% of the public would oppose such construction in their local area, greater than the 31% (up from 21% last year) who say they would support it. Evidently, the history of nuclear disasters, from Chernobyl to Fukushima, still weighs heavily on the public.

Yet, with 40% of the public saying they are significantly concerned about their ability to afford their energy bills this year, the Government may look beyond renewable energy solutions which could take years to develop. Half of the public say they would support oil and gas explorations in the North Sea being restarted, for instance. Pluralities of 37% of all respondents and 49% of 2019 Conservative voters say they would support the ban on fracking being reversed in order to reduce energy bills.

The United Kingdom used to be a net exporter of natural gas, a position that was reversed, in part, due to climate change policies. But support for a relaxation of ‘net zero’ policies in order to reduce energy bills is considerable, at 51% of the public and 64% of 2019 Conservative voters. Could a reversal on this front be in the cards?

As the war in Ukraine stretches onwards, the UK Government is under considerable pressure to soften the economic hit to the public, particularly on fuel prices. With the public readily supportive of the sanctions against Russia, the Government cannot walk back its hard-line sanctions position. Moreover, the prospect of future ruptures with other energy-exporting regimes remains. Faced with this new quandary, can the Government devise an alternative approach to energy in time for the next election?

Our take: Rishi Sunak attracted much public derision last week when he apparently borrowed a Kia from a Sainsbury’s worker for a photoshoot. The attempt by the billionaire Chancellor of the Exchequer to appear ordinary has clearly backfired. When prompted with a statement, “Rishi Sunak is out of touch with the struggles of ordinary families,” 67% of respondents to our polling this week, including 58% of 2019 Conservative voters, say they agree. Just 10% say they disagree..

Our take: Poland has reportedly admitted 2.4 million Ukrainian refugees since the conflict began in February. As a result of this generosity, 40% of Britons polled think Poland has done the most to help Ukraine since the invasion began. 16%, by comparison, think the United Kingdom has done the most, followed by 7% who cite the United States. No other country prompted, including France, Germany, Hungary, and Romania, sees more than 2% of respondents believing they have done the most for Ukraine.