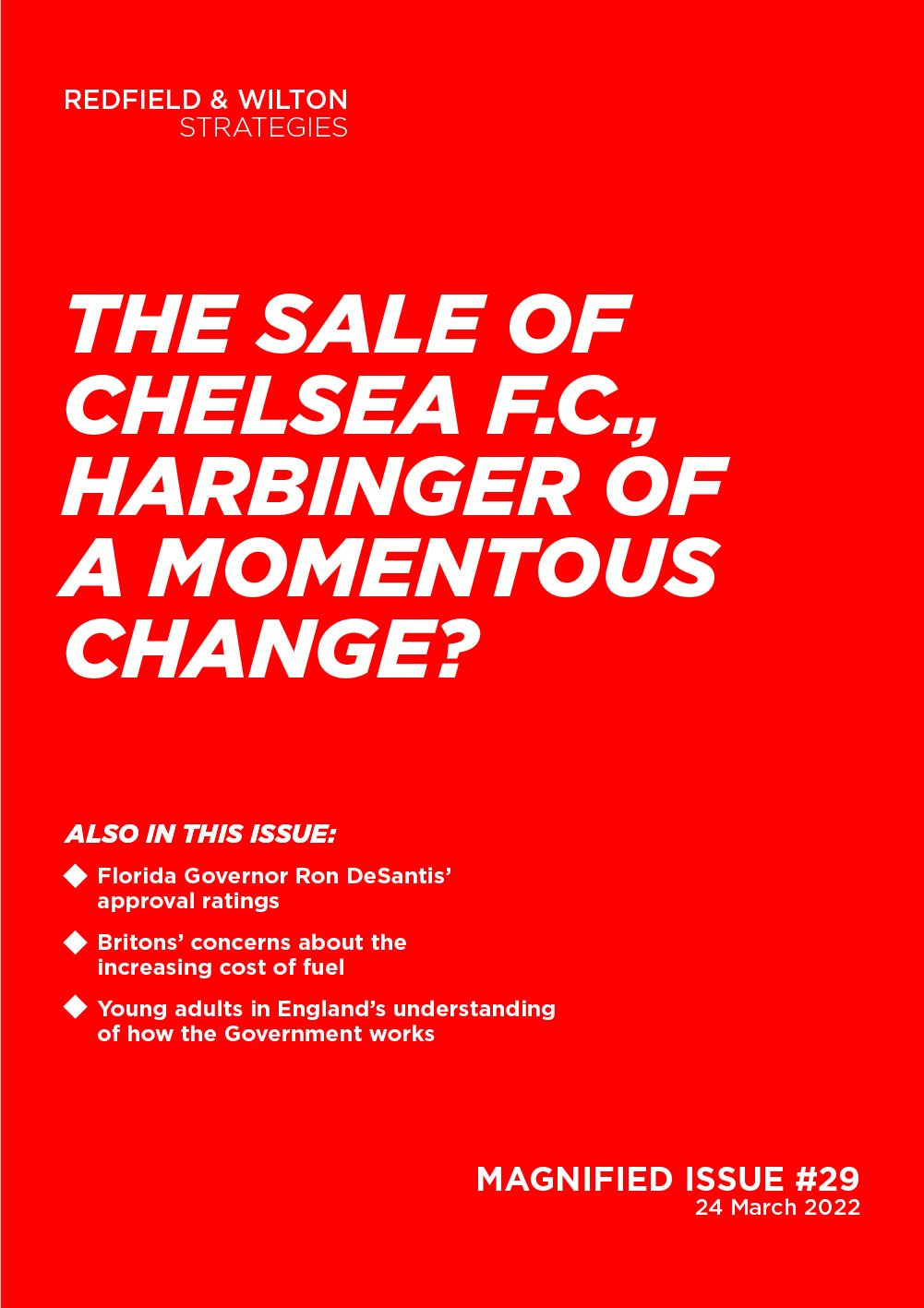 It’s time to take a look at the polls! In this week’s issue of Magnified, we take an in-depth look at the immense public support for sanctions on Russian billionaire Roman Abramovich and how this support reveals a public willingness to pursue a more moralistic policy, both with regard to the ownership of football clubs and to economic trade in general.

Evidently, the bounce of approval for the Government in the wake of the war in Ukraine, however frequently the war is featuring in the newspaper headlines, has waned, especially as the cost of living continues to rise.

For this reason, the Ukraine crisis is unlikely to see a revival in approval for Boris Johnson’s Government, barring an improbable implosion of Vladimir Putin’s regime. Without a meaningful improvement in domestic policy, the Government’s standing among voters may even worsen.

*Unlike voting intention results, responses to this question are not weighted by likelihood to vote and do not exclude those who say they ‘do not know.’

According to polling conducted last week, Florida Governor Ron DeSantis’ overall net approval rating registers at +22%, notably higher than the net approval ratings of Senators Marco Rubio (+11%) and Rick Scott (+7%). Most notably, a third of voters (31%) say they ‘strongly approve’ of the Governor’s performance, a figure that includes 62% of those who voted for Donald Trump in 2020.

On every issue we polled, the Governor of the Sunshine State receives a positive approval rating, most notably on the coronavirus pandemic (+18% among all voters, +81 among 2020 Trump voters, -43% among 2020 Biden voters). 30% of Florida voters, including 50% of Trump voters, cite Florida’s pandemic response as the policy area where the DeSantis Administration has performed best—though, interestingly, 25%, including 44% of Biden voters, cite the pandemic as DeSantis’ worst issue.

Throughout the pandemic, Florida has pursued a distinctly more liberal path, beginning with being one of the last states to issue and one of the first to lift a ‘stay-at-home’ order in the spring of 2020. On 25 September 2020, the Government completed its reopening and did not bring back restrictions on public gatherings thereafter. Later, in 2021, the Governor went further by prohibiting private businesses such as restaurants and bars from requiring proof-of-vaccination from customers and schools from mandating students to wear masks.

California, by contrast, ended its system placing limits on businesses such as restaurant occupancy on 15 June 2021 and relaxed its mask mandate in schools only two weeks ago, on 12 March 2022—in both instances, about nine months behind Florida. The Golden State was also one of six states to implement a digital vaccine passport, something which is still used by Californians seeking entry into large indoor events such as clubs and sport games. In this highly Democratic state, however, Governor Gavin Newsom received a +26% net approval rating on his pandemic handling in our most recent poll conducted in August 2021 (+78% net among 2020 Biden voters, -37% net among 2020 Trump voters). The contrast could not be greater.

The Sale of Chelsea F.C., Harbinger of a Momentous Change?

Amidst rising fuel prices, a coming influx of Ukrainian refugees, and even potential cyberattacks by Russia, the forced sale of Chelsea Football Club as a result of sanctions on Russian billionaire Roman Abramovich would, one might think, rank as one of the less significant and therefore less reported consequences for life in the United Kingdom from the war in Ukraine.

Nevertheless, as much as a quarter of the English public and 41% of respondents who have attended a football match in the past year say they have read or heard ‘a significant amount’ about the UK Government’s sanctions on Roman Abramovich, while a further 39% of both groups say they have heard ‘a fair amount.’ Evidently, like the European Super League debacle in April last year, this sporting issue has attracted quite a bit of broader public attention—and perhaps justifiably so.

The Russian oligarch’s purchase of the London football club nearly two decades ago, when relations between Russia and the United Kingdom were far more friendly, heralded a new era for English and European football. Abramovich was the first of many foreign investors to sink billions of fiat currency into building super-clubs stacked with superbly talented players, sophisticated coaching staffs, and modern facilities, all in the quest for sporting glory. Now, the forced sale of his club has the potential to be an equally momentous turning point.

One might have reason to doubt that a change to the involvement of corrupt governments in football, which stretches as far back as Argentina and Italy hosting the 1978 and 1934 World Cups respectively, is imminent. After all, Qatar, whose Emir also owns Paris St. Germain, is set to host the next World Cup this November, and the sovereign wealth fund of Saudi Arabia’s purchase of Newcastle United was greenlighted by the UK Government only months ago. Manchester City, whose owner is effectively the United Arab Emirates, currently sits atop the Premier League table.

But the sudden change with regard to Mr. Abramovich’s ownership of Chelsea—a microcosm of the broader rupture between ‘the West’ and Russia, which hosted the 2018 World Cup—has brought the United Kingdom’s Government in alignment with the deep willingness among the British public to pursue a more moralistic economic and foreign policy approach, both when it comes to football and to trade in general.

This considerable support for the sanctions against Abramovich is striking and should raise difficult questions for other Premier League football clubs owned by individuals or organisations with ties to foreign governments that transgress international norms and inflict significant human rights abuses.

In fact, two-thirds of members of the English public (66%) say investors who have ties to Governments that inflict human rights abuses should not be allowed to own Premier League football clubs. Just 16% say they should be allowed. Among those who say they have attended a match in the past year, this figure doubles to 32% but remains, by far, the minority position.

This distaste does not stem from a perceived unfairness in sporting competition. 63% of those who say they have attended a football match in the past year deem the Premier League to be ‘fair’ in its current state, while 28% deem it ‘unfair.’ 52% of all respondents in England think any well-run professional football club has the chance of winning the Premier League, rising to 68% of match attendees.

More specifically, views among English football fans on whether the ownership of the best teams by rich, billionaire investors has been a good or bad thing for English football rather vary (hint: fans of teams with generous investors are more likely to say it has been a good thing). But there is a clear consensus among fans, no matter what club they support, that owners with ties to governments that commit human rights abuses should not be allowed to own Premier League clubs.

In Britain, such perspectives appear to have existed well before the Russian invasion of Ukraine. In polling unrelated to football conducted in early February, 67% of Britons agreed that the United Kingdom should impose targeted sanctions on individual citizens of other countries who are found to be complicit in human rights abuses.

The same poll found, more broadly, 62% of Britons agreeing that the United Kingdom should only make trade deals with countries that meet certain human rights standards, with no exceptions even for countries that may bring a clear economic benefit to the United Kingdom. When given the specific examples of China, Russia, and Saudi Arabia, which can all provide clear trading benefits to the UK, 47% of respondents, a plurality, said the UK Government should not secure trading deals with these countries, while 27% said they should.

Sanctions levied against Russia in the wake of the invasion of Ukraine therefore have brought the UK Government and its policies closer towards where public opinion stood on foreign trade before the invasion. Likewise, the sanctions on Chelsea owner Roman Abramovich appear to have brought the Government closer to the opinions of the public and, equally, of fans regarding the ownership of Premier League football clubs in general.

As a consequence, the UK Government, having tapped into public sentiment with its latest policy actions, should be more likely to continue further down this policy direction rather than revert back to the status quo ante. The ownership of clubs such as Manchester City or Newcastle United or the participation of the Three Lions in the 2022 World Cup in Qatar may not, at present, be in doubt, but the immense public support for the forced sale of Roman Abramovich’s Chelsea and for a more moralistic policy approach in general indicates just how easily things can change.

Our take: The Office of Budget Responsibility has forecast that the average household energy bill will rise £690 to £1,971/year from April 1 and a further £830 to £2,800/year from October onwards. In our polling on 9 March, well before the latest announcement regarding the autumn increase, as many as 40% of Britons were already saying they were ‘very concerned’ about their ability to afford their energy bills this year. This figure had increased from 31% on 19 January.

Our take: Amid Rishi Sunak’s latest attempt to decrease taxes, commentators have noted that Mr. Sunak is ‘still overall a tax-raising Chancellor.’ Prior to yesterday’s Spring Statement, voters in ‘Red Wall’ constituencies in polling conducted on Tuesday said they associated the Labour Party with ‘advocating for lower taxes.’ 19%, by comparison, associated the Conservative Party with this stance. Another 6% said they associated both parties with advocating for lower taxes, while 22% said they made this association with ‘neither’ party. See more of such polling in a previous Magnified issue.

‘We can’t help everyone because it’s too expensive’: Tories facing a cost of living reckoning.
iNews | 19 March 2022