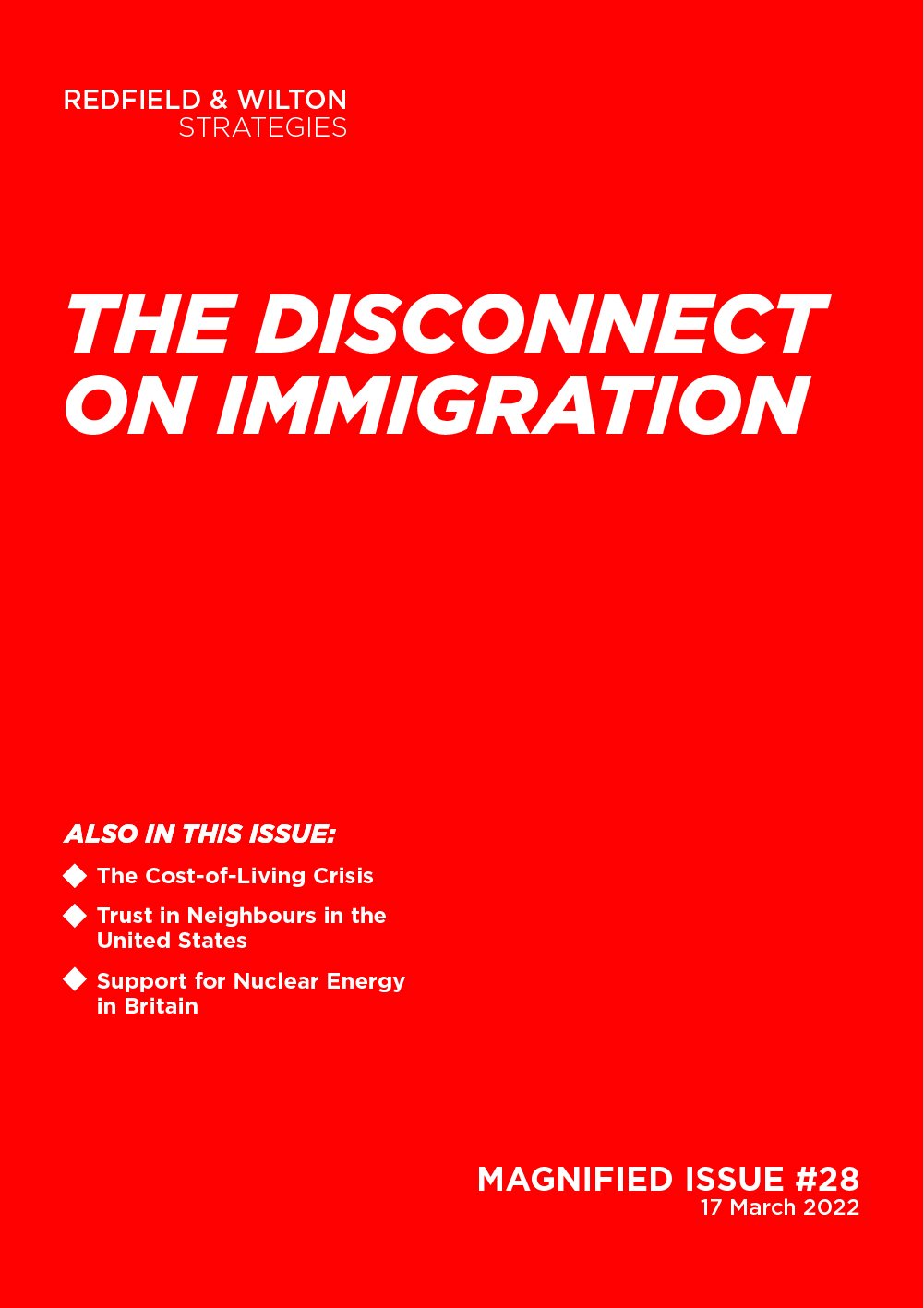 It’s time to take a look at the polls! In this week’s issue of Magnified, we take an in-depth look at the UK Government’s unpopular performance on immigration.

Boris Johnson’s approval rating has dipped five points, mollifying the significant surge in his approval rating that occurred in the wake of the war in Ukraine. Even so, his approval rating, now at -12%, has increased 19 points from his lowest ever net approval rating of -31% which was recorded on the Monday prior to the invasion. Most voters continue to think the Prime Minister’s response to the Ukraine crisis has so far been the right one.

For Chancellor of the Exchequer Rishi Sunak, however, any Ukraine bounce has disappeared. Dropping nine points in one week, the Chancellor’s approval rating registers at +6% this week, just two points higher than his worst ever recorded net approval rating. One key factor behind this lack of a Ukraine bounce for Rishi Sunak is that he has not been as widely associated with the economic sanctions response as he has been with other popular economic policies in the last two years such as the furlough scheme. Another key factor is the lingering cost-of-living crisis (see below).

Keir Starmer, meanwhile, sees a net positive approval rating (+2%)—his first in nearly a year. Amidst this positive development for Starmer, we nevertheless note that nearly as many members of the public have a neutral opinion of the Labour leader (31%) as have a positive one (32%) or negative one (30%), highlighting the degree to which he remains an unknown, inoffensive figure to the public.

During the party-gate scandal (remember that?), we argued that this ‘normal’ persona was an asset for Starmer when set in contrast to the flamboyant but unreliable Boris Johnson. Yet, the Ukraine crisis has switched the lens through which the public judges the two leaders of Britain’s main political parties to one where presence is more frequently seen as valuable. For this reason, while Labour still leads in overall voting intention, slightly more members of the public see Boris Johnson (40%) than see Keir Starmer (37%) as the better Prime Minister for the United Kingdom at this moment.

For the first time since we began tracking this question in December 2020, more than half (53%) of members of the British public say they think their financial situation is going to worsen in the next three months. Even during the height of the coronavirus pandemic, there were fewer Britons who were pessimistic regarding their financial prospects than there are now, indicating the degree to which inflation, particularly inflation of fuel prices, has affected the mood of the public.

It should thus be clear that the UK Government faces two crises in actuality:

While the war in Ukraine has received nonstop headline press coverage (more than two-thirds of the public say they have heard or read a ‘significant amount’ about the war), the cost-of-living crisis will ultimately be more important for voters at home.

61% of respondents to our polling a month ago said that rising prices in the United Kingdom mattered to them significantly. By contrast, only a quarter of respondents (26%) to our polling last week said that the war in Ukraine mattered to them significantly, a figure that, despite widespread media coverage, has hardly changed since a month ago (25%) when the invasion was still a possibility rather than the certainty it now is.

Further, half of the public (49%) has indicated this week that the economy will be one of the issues that would most determine how they would vote if there were a General Election tomorrow. Only healthcare (52%) is more frequently deemed a determinant issue. By contrast, foreign policy (10%) is one of the least frequently cited major issues for voters.

The public broadly supports the economic sanctions that the United Kingdom and its allies have levied against Russia. A significant portion of the public thinks sanctions could go even further and would support measures such as outright banning Russian gas and oil for the duration of the war in Ukraine (rather than the current policy of ‘phasing out’ Russian oil).

Can such bullishness outlast the economic pressures at home?

‘Red Wall’ Seats (England/Wales): Just 22% of voters in the traditionally Labour-held seats that the Conservative Party won in 2019 think that Brexit is ‘done and behind us.’ Instead, two-thirds (67%) think Brexit is ‘still a work in progress.’ Among those who voted Conservative in 2019, slightly more (32%) do think Brexit is behind us, but the majority position (62%) among this subgroup is that Brexit is an unfinished project.

No issue attracts as much disapproval for the UK Government as immigration.

47% of the public now say they do ‘not at all’ trust Boris Johnson’s Government to deliver on immigration, including 33% of those who voted Conservative in 2019. Only on the issue of taxation, which we have covered in a previous issue of Magnified, is the Government as distrusted (also 47%, including 28% of 2019 Conservative voters).

Home Secretary Priti Patel, the cabinet minister responsible for immigration, has frequently ranked as one of the least popular members of Boris Johnson’s Government. Her net approval rating has never risen above -20%. Among 2019 Conservative voters alone, her approval rating this week is negative, at -9%.

Most significantly, 32% of the public this week say they would most trust Labour to handle immigration, while just 26% say they would most trust the Conservatives to do so (note that, unlike our voting intention, responses to this question are not weighted by likelihood to vote and do not exclude those who say they don’t know). In so-called ‘Red Wall’ seats, 34% would trust Labour on this issue, while 24% would trust the Conservatives—a significant gap.

Similarly, 43% of the public think the Conservative Party’s policy is to reduce the current level of legal immigration into the United Kingdom, while nearly a third thinks the party in Government is seeking to maintain (19%) or increase (12%) the current level.

Initially, one might suspect from these firmly negative figures that the public does not like the policy stance which they associate with the Conservative Party. In other words, they might not want a stricter immigration system. After all, if the Conservative Party is associated with being tough on immigration, is consistently seeing notable disapproval on their immigration performance, and is less frequently trusted than Labour on this issue, then one might reasonably suggest that the public might prefer a more open immigration stance.

And, for a portion of voters, this hypothesis bears out. 22% of those who voted for Labour in 2019, for instance, says there is not enough legal immigration into the United Kingdom, and a third of this subgroup of voters says the country should not adopt a hard-line approach to illegal immigration. For these voters, disapproval of the Government’s immigration policy stems from a clear preference for a more open immigration system.

And therein lies the fundamental clue for much of the public’s unhappiness with the Government’s immigration policy. Few believe that the Government is actually standing by and delivering on the policy position it has repeatedly claimed as its own.

45% of the public and 58% of Conservative voters cite the ability to control immigration into the UK from the EU as an opportunity created by Brexit that should be taken advantage of. The ability to negotiate independent trading relationships is the only other opportunity more frequently cited by both the public (48%) and Conservative voters (60%) as something to be taken advantage of. But just a quarter of the public (28%) thinks immigration from the European Union into the United Kingdom is now lower in the wake of Brexit. The majority thinks immigration is similar (28%) or even higher (25%).

Such perceptions arguably do not quite match reality. The Office of National Statistics has yet to publish an official estimate of immigration into the United Kingdom after March 2020, but a provisional release in November estimated that 34,000 had moved to the UK from the EU in 2020—far lower than the 250,000+ EU citizens that had arrived in previous years.

But, at the same time, migrant crossings had indeed tripled in 2021 and the decrease in legal EU migration in 2020 primarily owed itself to the pandemic than to a change in policy (which did not go into effect until January 2021 due to the Brexit transition period). Taken together, there is no strong sentiment that the Government is following through on its promise to seriously tackle immigration.

Instead, the public may now see in Boris Johnson’s Government what they had come to see in other recent Conservative Governments. Most notably, former Prime Minister David Cameron had repeatedly promised to reduce the increase in migration seen during the Blair-Brown years, only to see immigration increase during his government.

More than any other issue we have covered so far, including taxation, policing, the coronavirus pandemic, or the war in Ukraine, the topic of immigration sees a profound disconnect between the Government on the one hand and the opinions of the public and Conservative voters in particular on the other hand. With none of the leading opposition parties associated with the stance that a sizable portion of the public wants, this disconnect is unlikely to be resolved anytime soon and may ultimately result in voter apathy.