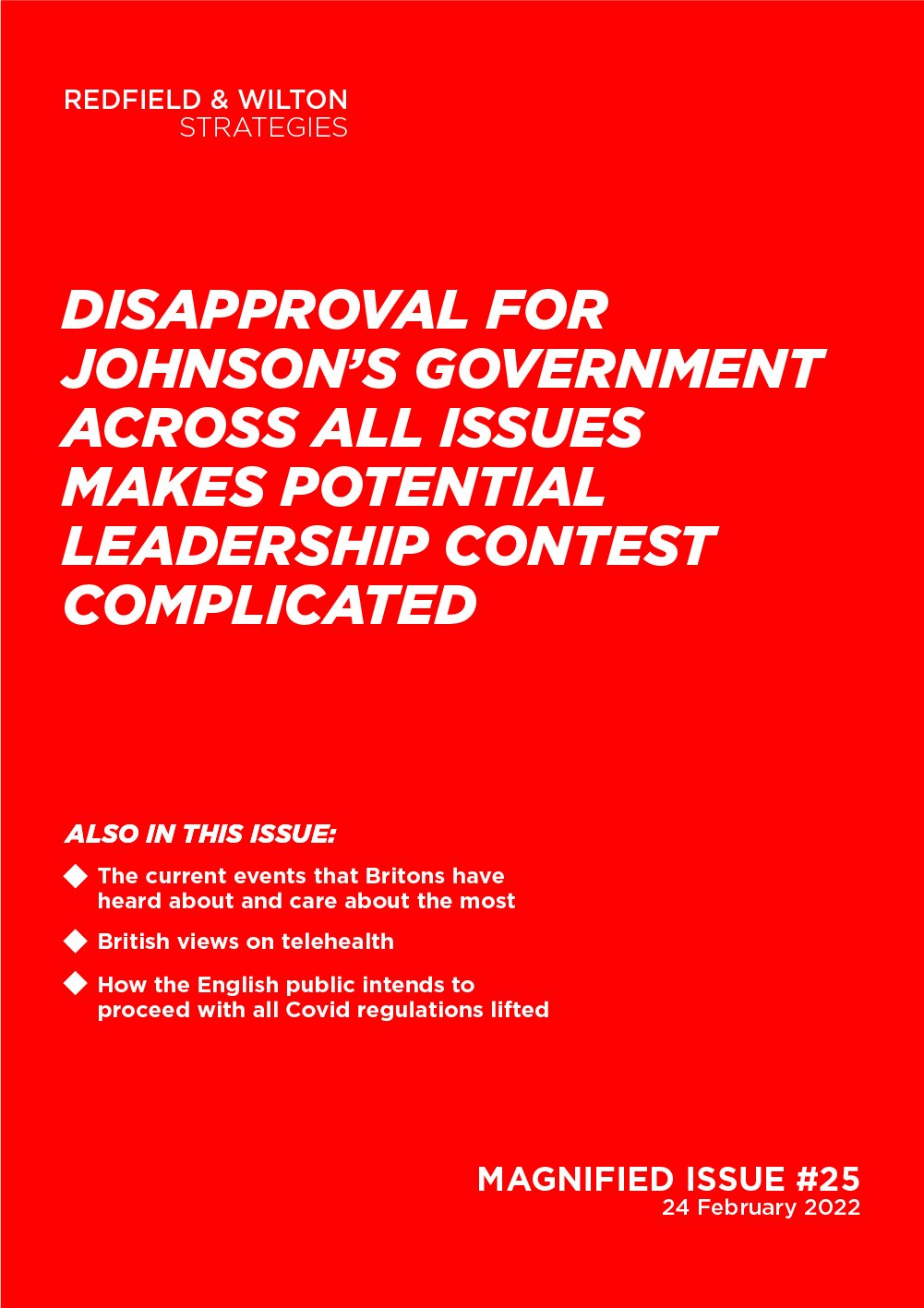 It’s time to take a look at the polls! In this week’s issue of Magnified, we take an in-depth look at the challenge that will confront Cabinet Ministers regarding how to frame their position within Boris Johnson’s Government, should they run in a potential leadership contest.

Our latest voting intention poll finds the Labour Party leading by 6%, a one-point increase to their lead over the Conservative Party since last week’s poll. Overall, 39% (+1) say they would vote for Labour if there were to be a General Election in the United Kingdom tomorrow, while 33% (–) would vote Conservative.

The Government’s net competency rating stands at -35% (-6) in this week’s poll, and the Prime Minister’s net approval rating has decreased eight points to -31%, which ties for the lowest net rating we have recorded for Johnson. Meanwhile, Chancellor of the Exchequer Rishi Sunak has also received his lowest-ever net approval rating, at +4% (-6).

Public frustration with the Boris Johnson Government evidently remains at a fever pitch, and the party-gate scandal is not entirely to blame for it. In fact, with majorities of Britons agreeing they are tired of hearing about the Downing Street parties (60%) and the country needs to move on from them (55%), the source of the public’s ongoing dissatisfaction clearly lies deeper.

This week, the Johnson Government receives a negative net approval rating in every policy area on which we poll, with many of such figures experiencing substantial declines over recent months.

When asked to assess its performance on policies relating to Scotland (-6%), the economy (-15%), policing/crime (-21%), the NHS (-24%), and housing (-31%), the public this week gives the Government the lowest net approval ratings we have recorded since we began tracking these questions in July 2021. Further, in the past week, the Government’s net approval rating on foreign policy dropped six points to -13%, while its rating on the pandemic fell nine points to -5%.

We have mentioned before that lower levels of approval in specific policy areas can, in part, be viewed as a symptom of wider dissatisfaction with the Government at large. But as we move further away from the party-gate scandal and the public’s evaluations of the Government continue to grow increasingly unfavourable, it is apparent that Britons are also reacting to specific policy actions (or inactions).

The mounting cost of living crisis and upcoming National Insurance increase no doubt figure heavily in respondents’ assessments of the Government’s economic performance, resulting in a -15% net approval rating which has decreased by nine points since the start of the year and by 25 points since last July. The -24% rating on the NHS is likely influenced by ongoing NHS backlogs, while the -21% rating on policing/crime is at least partially a consequence of the current increased scrutiny of the Metropolitan Police we covered in last week’s Magnified. With all of these areas receiving record-low net approval ratings this week, the public is blatantly unimpressed with how Johnson’s Government has responded to these issues.

Therefore, while the fact that many Britons are eager to move on from the Downing Street parties may be much-welcomed news for Boris Johnson, he is not at all in the clear. In reality, our polling on the public’s views of his Government’s policy performance reveals that his struggles are far from over.

Today’s Chart of the Week looks at the extent to which respondents to our 16 February poll both have heard about and care about various UK and global current events of the past month. The x=y diagonal line extending through the chart represents the point at which respondents saying they have heard or read ‘a significant amount’ about an event and saying the event has mattered ‘a significant amount’ to them are equal. Thus, the further away a point is from the line, the greater the discrepancy between the amount heard about the occurrence and the amount respondents care about it.

Other events about which a majority of respondents have heard or read ‘a significant amount’ include the possibility of a Russian invasion of Ukraine (57%), Australia cancelling unvaccinated Tennis player Novak Djokovic’s visa (54%), and the coronavirus pandemic amidst the Omicron variant (52%). Among these events, the latter is the one Britons care about the most, with a third (32%) saying the pandemic amidst the Omicron variant has mattered to them ‘a significant amount.’ By contrast, smaller proportions say a possible Russian invasion of Ukraine (25%) and Australia cancelling Djokovic’s visa (15%) matter to them to this extent.

England: A majority (57%) of 16-to-25-year-olds in England agree that they could not imagine living without social media, whereas just 18% disagree. At the same time, the demographic is tightly split on whether the time they spend on social media and what they get out of using it is mostly useless (44%) or mostly useful (43%) to their life.

Great Britain: Britons express a clear preference for meeting with their doctors in person (66%) rather than by video (12%), with 52% of those who prefer in-person consultations saying they would rather wait for such an appointment instead of taking a video call the next day. The preference seems to stem from widespread doubts about the quality of virtual medical appointments: 54% think telehealth consultations most often result in diagnoses that are less accurate compared to in-person medical consultations.

How Will Leadership Contenders Portray Their Role in Johnson’s Government?

With the Metropolitan Police investigation into the Downing Street parties ongoing, Boris Johnson’s future remains in question. If the police find the Prime Minister guilty of breaching coronavirus restrictions and fine him accordingly, he will be under significant public pressure to resign, with two-thirds (66%) in our 9 February poll saying he should leave office in this event.

However, even if the investigation does not result in Johnson being fined, and even if the nation is able to move on from the ordeal, such an outcome will not spell the end of the Prime Minister’s troubles. Frustration with Johnson’s Government runs much deeper, and desires for a new Conservative Party Leader to emerge before the next General Election will no doubt persist.

Therefore, amidst the real possibility that a leadership contest may be on the horizon, some members of Johnson’s Cabinet have no doubt begun to think about a potential bid to succeed the Prime Minister. Yet, with disapproval across several policy areas being a key reason behind Johnson’s current predicament, one major question looming large in the heads of the leadership contenders will be how they should frame the role they have played in the Government of the very man they seek to replace.

Some candidates may find it strategically wise to align themselves closely to Boris Johnson to appeal to the party faithful whose views of the Prime Minister remain favourable. Contenders could aim to particularly associate themselves with the more positive elements of Johnson’s track record, which, in the public’s (and especially loyal Conservative voters’) eyes, include his response to the pandemic and his getting Brexit done.

Yet, any Minister hoping to succeed Boris Johnson may also run the risk of poisoning their own reputation through their connection to the Prime Minister, especially as he and his policies have become increasingly unpopular with the public. Accordingly, seeking distance from Johnson’s Government and its positions may be wise, allowing a candidate to spell out how they would have taken different courses of action had they themselves been in charge.

Is it possible to establish such distance?

However, the extent to which respondents assign Cabinet members responsibility relative to the Prime Minister is not uniform across all Ministers. Respondents are notably more prone to feeling Rishi Sunak has been more responsible than the Prime Minister for economic policies (27%) and tax policies (26%). Among 2019 Conservative voters, these figures increase to 35% and 32%. For the other Cabinet members on which we polled, 18% or fewer believe they have been more responsible than Boris Johnson for their respective policy areas. There accordingly exists a perception that, relative to other leading Cabinet figures, Rishi Sunak has had a greater degree of responsibility over his remit.

These results suggest that comparatively lower-profile Cabinet Ministers like Javid, Patel, and Truss may be less able than Sunak to take ownership over their Departments’ policy records. But within a context of growing discontent with the Government’s policy performance, this reality may benefit these potential contenders. For Priti Patel and Sajid Javid in particular—with immigration and the NHS being the most-selected policy areas where Conservative voters believe the Johnson Government has performed the worst—the more they distinguish themselves and their policy positions from those of the Prime Minister, the better.

If Boris Johnson’s Premiership is a slowly sinking ship, any Cabinet Ministers too closely enmeshed in this Premiership may be doomed to go down with it. But with the public convinced that Ministers are equally as responsible for policies as the Prime Minister, jumping ship may prove an insurmountable challenge, especially for those like Rishi Sunak who are perceived to have a particularly heightened role in the Government. Therefore, should Boris Johnson be ousted on the basis of poor approval across several key issues, replacing him will not be a straightforward task for the Conservative Party.

Our take: Boris Johnson has announced that all remaining coronavirus regulations will be lifted in England, including the requirement to isolate after testing positive for Covid. Despite this news, many English residents—but not most—plan to continue taking some of the precautions that have become commonplace (and legally required) during the pandemic. Once regulations end, 50% still intend to isolate if they test positive for Covid, and if they develop the virus’ symptoms, 49% say they will get tested and 41% say they will isolate. 45% of respondents also plan to continue avoiding very crowded spaces and 44% intend to continue wearing a face mask in public indoor spaces.

Our take: In response to Russia’s invasion of Ukraine, the UK and several allies have so far reacted by imposing new sanctions on Russia, an act which a majority (57%) in our poll last week said they would support if Russia were to invade, including 67% of Conservative voters and 52% of Labour voters. In the 16 February poll, there also existed a degree of support (39%) among the public for providing weapons and supplies to Ukraine, though 26% indicated they would oppose such a response to an invasion. When it comes to the option of deploying British and allied troops to Ukraine, opposition grows to 40%, whereas 24% said they would support sending troops.

Britain should never seek a ‘special relationship’ with the EU, says Lord Frost
The Telegraph | 17 February 2022