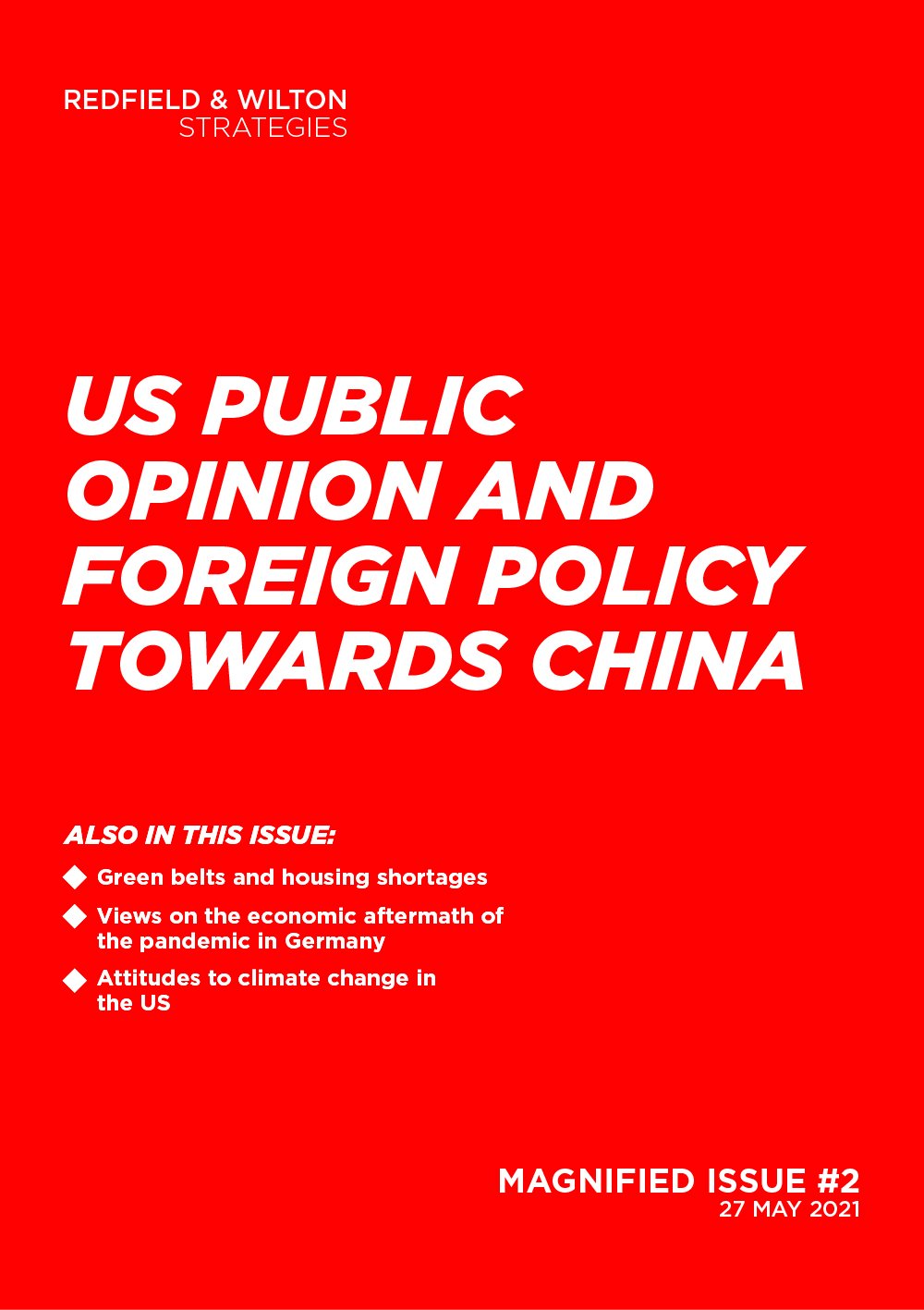 It’s time to take a look at the polls! Each week, Magnified delivers insights and analysis straight to your inbox, allowing you to stay up to date on what the public think about the most important issues of the day. Keep reading for the latest updates on our weekly trackers, as well as our national and international polls. Today, we also take an in-depth look at how negative public opinion towards China is one of the rare topics that can generate bipartisan agreement in the US at the moment—and how this drives US foreign policy.

All Net Approval Ratings
(24 May):

Our latest Voting Intentions poll gives the conservatives a ten-point lead over Labour, with 43% (+1) of voters saying they would vote for the Conservative Party if an election were to be held now. Moreover, the Prime Minister’s net approval rating stands at 8% this week and thus remains positive for the sixteenth week in a row—overall, the ongoing success of the UK’s coronavirus vaccine rollout is likely to be a key factor contributing to this evaluation.

Meanwhile, at 33% (-), Labour’s share of the vote remains at its lowest level since May 2020. As these figures and recent elections make clear, Keir Starmer has not proved himself to be the electoral asset many within the Labour Party were expecting—or at least hoping—him to be when he took over the Party’s leadership in April 2020. The fragmentation of the working class in Britain is not a recent development. Yet, our data indicates that Labour has still not found a way to re-engage with a group of voters that are now more defined by their cultural conservatism rather than any form of ‘class allegiance.’ Caught between pro-Brexit Conservatives and leftist nationalist parties in the UK’s devolved nations, the Labour Party under Keir Starmer has so far failed to convince voters that it has a set of distinctive policies and principles to offer.

With another by-election coming up and Labour having selected former MP Jo Cox’s sister to represent the party in Batley and Spen, Keir Starmer must be feeling the heat. Not least because our latest polls show that, were a General Election to be held now, 49% of voters would expect the Conservative Party to win the highest number of seats, against 20% who think Labour. These figures represent the highest ever results for the Conservatives and the lowest ever result for Labour—yet another indication of Labour’s difficulties to be perceived as a party that is fit to govern by a majority of the electorate…

US: 44% of Americans say they could not vote for a leader who has demonstrated scepticism towards climate change—including 25% of respondents who say they voted for Donald Trump in the 2020 Presidential Election. Read more here.

Germany: 34% of Germans now believe the UK has handled the coronavirus crisis better than Germany—compared to the 64% who thought the UK had handled the crisis worse in May 2020. Read more here.

Great Britain: 49% of Britons say they actively try to avoid purchasing products that have been genetically modified—yet 65% also say they do not know how to identify GMO products at the supermarket. Read more here.

Great Britain: 64% of Britons agree there is a housing shortage in the UK—yet 79% of respondents who are aware of what green belts are say the rules on building houses in green belts should remain strict in order to protect the environment, even if it is at the expense of building more affordable houses in British cities. Read more here.

Compensation Conundrum: How Negative US Public Opinion of China Could Make Biden’s China Policy Even Tougher Than Trump’s

In fact, our research shows that significant pluralities of American voters blame China for the global spread of the coronavirus and are critical of China’s handling of earliest stages of the pandemic. 42% of the American public say that China is significantly to blame for the coronavirus crisis, with a further 24% saying the country is somewhat to blame. Overall, only 11% of Americans say China is not at all to blame, while 22% say they don’t know. Moreover, a majority of 59% believe that the Chinese Government covered up the outbreak of the coronavirus, including 73% of 2020 Trump voters and 52% of 2020 Biden voters. Only 14% of Americans think the Chinese Government warned the world about the coronavirus outbreak, while 27% say they don’t know.

These figures are noteworthy because they showcase bipartisan consensus—something that is rare to come by in US politics at the moment. Certain differences along partisan lines do of course remain: Republicans tend to favour a more hawkish approach than Democrats. Yet, the need for the US to counter China is one of the rare topics on which significant portions of Democrats and Republicans, whether at the level of political elites or at the level of the general public, can agree. In July 2020, for instance, two thirds of American respondents said they perceived China as a threat to the US—including 75% of those who said they would vote for Donald Trump and 58% of those who said they would vote for Joe Biden. Overall, only 10% of Americans perceived the country as more of an ally.

Most recently, news of a rare bipartisan deal on countering China that was voted 86-11 in the Senate—an institution that has become increasingly polarised over recent years—illustrates all of the above. As our research shows, such legislation, intended to counter China’s economic and geopolitical ambitions, is likely to find favour with voters across partisan lines. This fact poses a challenge for the Biden Administration that the new President will have to adapt to.

In the US, hostile public opinion towards China predates both Trump’s presidency and the coronavirus pandemic. These two have been merely aggravated existing trends. Yet, the Trump years have still brought about an important change: they have fundamentally altered the starting point of US policy towards China. In fact, anti-Chinese public opinion can now act as an important driver of foreign policy. Whereas previous administrations such as Obama’s were wary of adopting too hostile an approach for fear of alienating China, such restraint no longer appears electorally viable today.

Consequently, the pressure is on for Biden: At the level of Congress, Biden faces a Republican Party all too keen to accuse him of being ‘too soft’ on China—as a Democrat, Biden stands little chance of benefitting from a ‘Nixon in China’ effect were he to adopt a more conciliatory approach than his predecessor. This pressure is reinforced by an electorate that, in the run-up to the 2020 Election, consistently rated Donald Trump more likely to be ‘tough on China’.

Almost ironically, in an attempt to compensate for this potential electoral weak spot, Biden’s policy towards China might end up being just as tough—or even tougher—than Trump’s. Sure, the tone might have changed somewhat since Biden took office, but the same is not necessarily true of the timbre of US policy towards China.

Overall, where China and the US are concerned, public opinion appears as both a mirror and a driver of bilateral competition. What the pandemic has done is exacerbate the chasm between the two countries even further. With our polling, we will keep an eye on how this dynamic evolves over time—stay tuned.


Most Read Case Studies This Week

Many Britons Claim They Avoid Purchasing GMO Foods, Yet Admit They Don’t Know How to Identify Them
22 May 2021 (6 min read)


Our Research on Social Media

Does the British public agree or disagree that the UK is currently experiencing a housing shortage? (see full tweet)

Do Britons support or oppose food products being grown with the use of pesticides? (see full tweet)