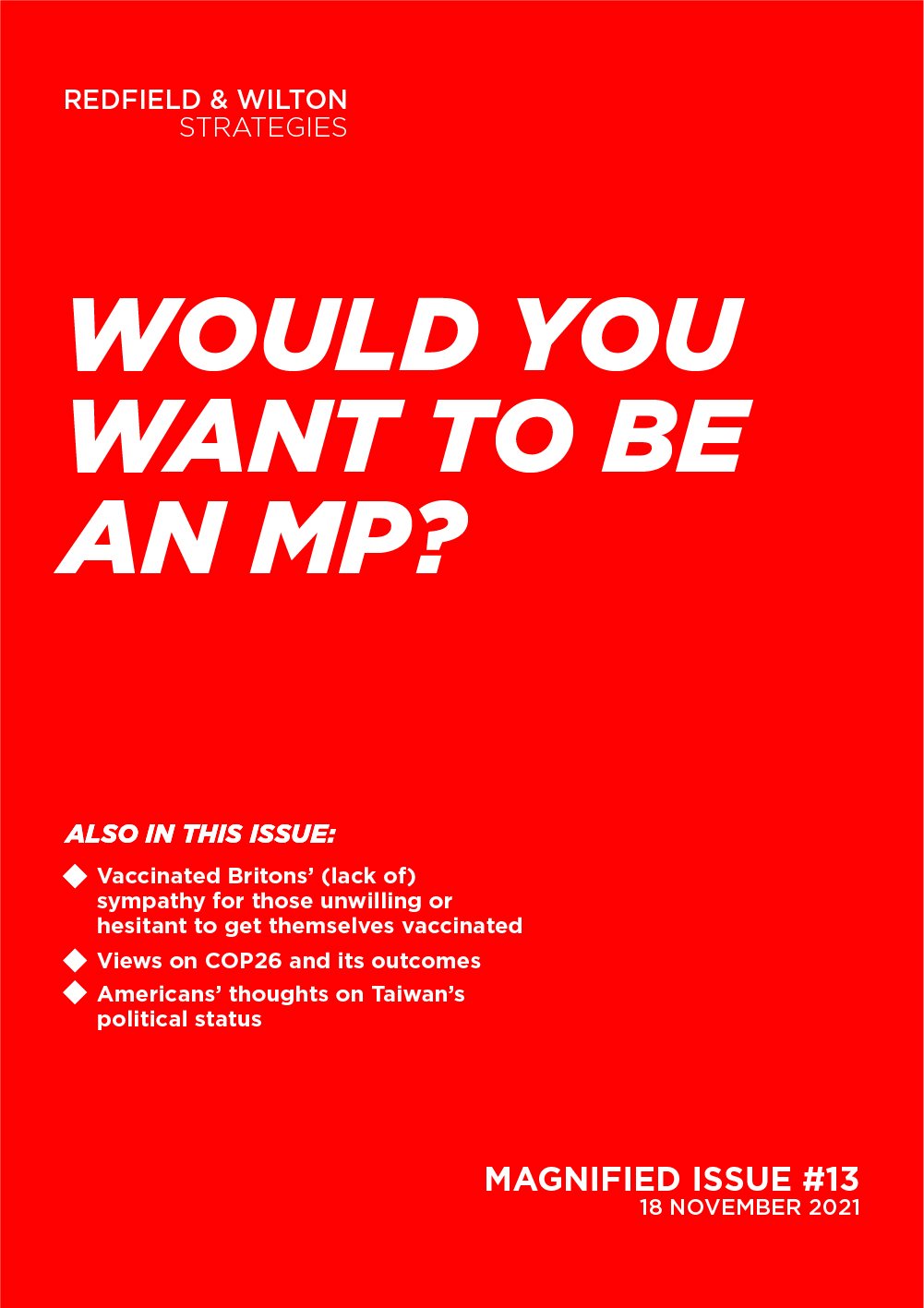 It’s time to take a look at the polls! Each week, Magnified delivers insights and analysis straight to your inbox, allowing you to stay up to date on what the public thinks about the most important issues of the day. Keep reading for the latest updates on our weekly trackers, as well as our national and international polls. Today, we also take an in-depth look at why the controversial option of raising MPs’ salaries may be a better option than only banning certain second jobs to ensure that MPs devote their time to their parliamentary work and to stave off the public’s suspicion MPs may be working for private interests rather than their constituents’.

As we pointed out in last week’s edition of Magnified, however, this situation is less a result of increased support for Labour than of decreased enthusiasm to vote for the Conservative Party.

Two weeks ago, before the Owen Paterson case made the news, those who voted Conservative in 2019 (73%) were noticeably more likely than those who voted Labour in 2019 (61%) to say they would be ‘certain to vote’ in a General Election, with this higher enthusiasm strengthening the Conservatives’ polling result. Now, however, although Conservative voters are once again more likely to say they would be ‘certain to vote’ if a General Election took place tomorrow than Labour voters, this margin is noticeably smaller, at 67% to 62%. That enthusiasm among Conservative voters has not fully recovered is thus one of the factors explaining Labour’s (admittedly marginal) lead in this week’s voting intention poll.

At the same time, it is also clear that the Government’s handling of the Owen Paterson case has not won it any favours with voters. That the Government’s net competency rating has dropped by a further four points to -20%, the lowest result we have recorded so far this year, is testament to public disapproval. The Prime Minister’s net approval rating has also decreased by another four points, now standing at -10%.

Specifically, 37% of Britons polled—including 37% of 2019 Conservative voters and 43% of 2019 Labour voters—disapprove of the Government’s response to Owen Paterson’s breach of parliamentary lobbying rules. A majority (58%) further agrees that Boris Johnson should apologise for the Government’s handling of this incident. The Prime Minister’s suggestion to update the Code of Conduct for MPs may win him some goodwill, but it likely will not be enough to put the case to rest and to place the Conservatives on a secure footing again.

Great Britain: If the UK were to reach ‘net zero,’ 49% of Britons think this change would make a difference in preventing climate change, compared to an also significant 30% who think it would not make a difference. In any case, 64% of Britons think the UK should pursue ‘net zero’ carbon emissions even if it is not clear whether pursuing ‘net zero’ would be effective enough in preventing climate change. 19% think the UK should not do so.

With these latest events in mind, it is perhaps no wonder that a plurality (35%) of the public disagrees that being a Member of Parliament is a desirable job. In fact, if given the opportunity, 62% of Britons say they would not want to be an MP themselves, compared to a much lower 26% who would. Coupled with this reticence to being a Member of Parliament themselves, majorities agree that the job of being an MP is an honourable job (52% agree, 17% disagree) but also a demanding one (68% agree, 9% disagree).

Even so, while many recognise that being an MP is a demanding and not particularly desirable job, more than half (55%) of Britons also think that the annual salary of £81,932 that Members of Parliament currently receive is too high. This view is shared by majorities of both 2019 Conservative voters (53%) and 2019 Labour voters (61%). A further 28% overall think the current figure is the right amount. Only 9% think £81,932 is too little.

In line with this majority view, opposition to raising MPs’ salaries is staunch—so much so that even if MPs were paid more specifically in view of disincentivising bribery and corruption, 52% would oppose a pay rise, compared to 23% who would support it. Similarly, Britons also adopt an unfavourable view towards raising the salaries of MPs with a view towards attracting the most qualified and talented people. Though 29% would support a pay rise with this rationale, a plurality of 40% nevertheless remains opposed.

At the same time, Britons are not categorically opposed to their MPs holding second jobs. Under certain conditions, the public supports their representatives supplementing their income. A plurality of 42%, for example, agrees with a statement asserting that any income, no matter how substantial, that Members of Parliaments earn outside their work as MPs is acceptable as long as such additional income is publicly disclosed. Though, to be sure, two-thirds (67%) of Britons do think there should be a limit to how much money a Member of Parliament can earn in their second job.

The undertone of this view is that Britons view a lack of transparency as problematic. Voters do not fully trust their representatives not to exploit public office for private gain—a situation that has certainly been aggravated by the latest scandal around Owen Paterson and also David Cameron’s Greensill lobbying row earlier this year.

Voters’ lack of trust in MPs not to abuse their privileged position for disproportionate private benefit is reflected in how much the type of second job that their MP holds matters to Britons. While pluralities would approve of their MP holding a second job as a doctor (42%), plumber (37%), teacher (36%), or HGV driver (35%), for instance, majorities would disapprove of their MP concurrently working as a lobbyist (57%), banker (55%), or business consultant (51%).

Comparing the two groups of professions, a clear dividing line is visible. Britons view any type of job in which someone may financially capitalise on being an MP by offering insider information or knowledge for sale with suspicion, likely wary of MPs working not for the public’s but for their own—or someone else’s—private interest. Consequently, proposals such as that voted on yesterday in the House of Commons to amend the Code of Conduct for MPs in view of preventing them from taking on paid consultancy work, for instance, may prove popular with the electorate.

In practice, however, simply banning MPs from taking on certain second jobs, or any second jobs at all, would only be a partial, surface-level solution. It may appease the latest public outcry for a moment, but it does not break the longer term cycle that, stretching back to the expenses scandal in 2009 and further, has led—and will continue to lead—to such situations in the first place.

Simply put, Britons do not fully trust their politicians. As a consequence, they are reluctant to let MPs enjoy higher salaries. But with more lucrative work available in the private sector, MPs and those who would consider being MPs will continue to look for other sources of income if their parliamentary remuneration does not rise. Banning MPs from taking on certain jobs may help somewhat with lessening conflicts of interest, but it will not fundamentally change the underlying reasons behind this cycle.

To counter the view that such a salary increase, which would need to be passed by sitting MPs, as yet another self-serving abuse of office, the change could also be coupled with other measures including:

The challenge is to convince voters who currently display little trust that paying MPs more now will lead to better outcomes—both in terms of democratic output and trust—in the long run. Part of that also involves challenging many voters’ idealistic view of an MP as someone who should be a selfless public servant, acting purely out of a sense of duty. It is time to accept that material gain and feeling appropriately rewarded may as much be motivating factors for MPs in choosing their occupation in the first place. And in the end, is it not legitimate that high quality democratic representation should come with a price tag?

Biden-Xi talks: China warns US about ‘playing with fire’ on Taiwan
BBC | 16 November 2021

Our take: In a virtual summit between Joe Biden and Chinese President Xi Jinping earlier this week, the sensitive topic of Taiwan was a key element of both leaders’ discussions. While Xi warned the US that supporting Taiwanese independence would be “like playing with fire,” Biden reiterated his commitment to the US’ ‘One China Policy’ but also stressed that he “strongly opposes unilateral efforts to change the status quo or undermine peace and stability across the Taiwan Strait.” The meeting thus ended in a reaffirmation of the status quo. Among the American public, however, only 10% of those polled are in favour of maintaining Taiwan’s current situation as is. While a very marginal 5% of Americans would instead prefer for Taiwan to unify with the People’s Republic of China, nearly half (48%) of Americans would most prefer Taiwan to be recognised as an independent nation. In line with these views on Americans’ preferred system of government for Taiwan, 52%, including 56% of 2020 Trump voters and 58% of 2020 Biden voters, would support the United States formally recognising Taiwan’s independence as a nation-state—a move that would be certain to exacerbate geopolitical conflict between the US and China.

Our take: While Prime Minister Boris Johnson described the global climate pact reached last weekend during the COP26 summit in Glasgow as “game-changing,” he also voiced his disappointment at last-minute efforts, notably made by China and India, to water down the agreement’s pledge with regards to coal from “phasing out” to “phasing down.” Similarly, the British public also appears to be in two minds about the conference. Last week, 41% of Britons said they had low expectations for COP26 and its outcomes, compared to 22% who had high expectations, and nearly half (47%) of Britons described international conferences on climate change like COP26 as ‘mostly meaningless.’ Nevertheless, an equal proportion of 47% also agrees that global climate summits and agreements between countries are an effective way to combat climate change—a statement with which 20% conversely disagree. While expectations for international climate summits may thus be low, Britons still appear to recognise that international cooperation is needed to address global environmental issues.

Are Tory MPs looking for the fire escape?
The Times | 15 November 2021