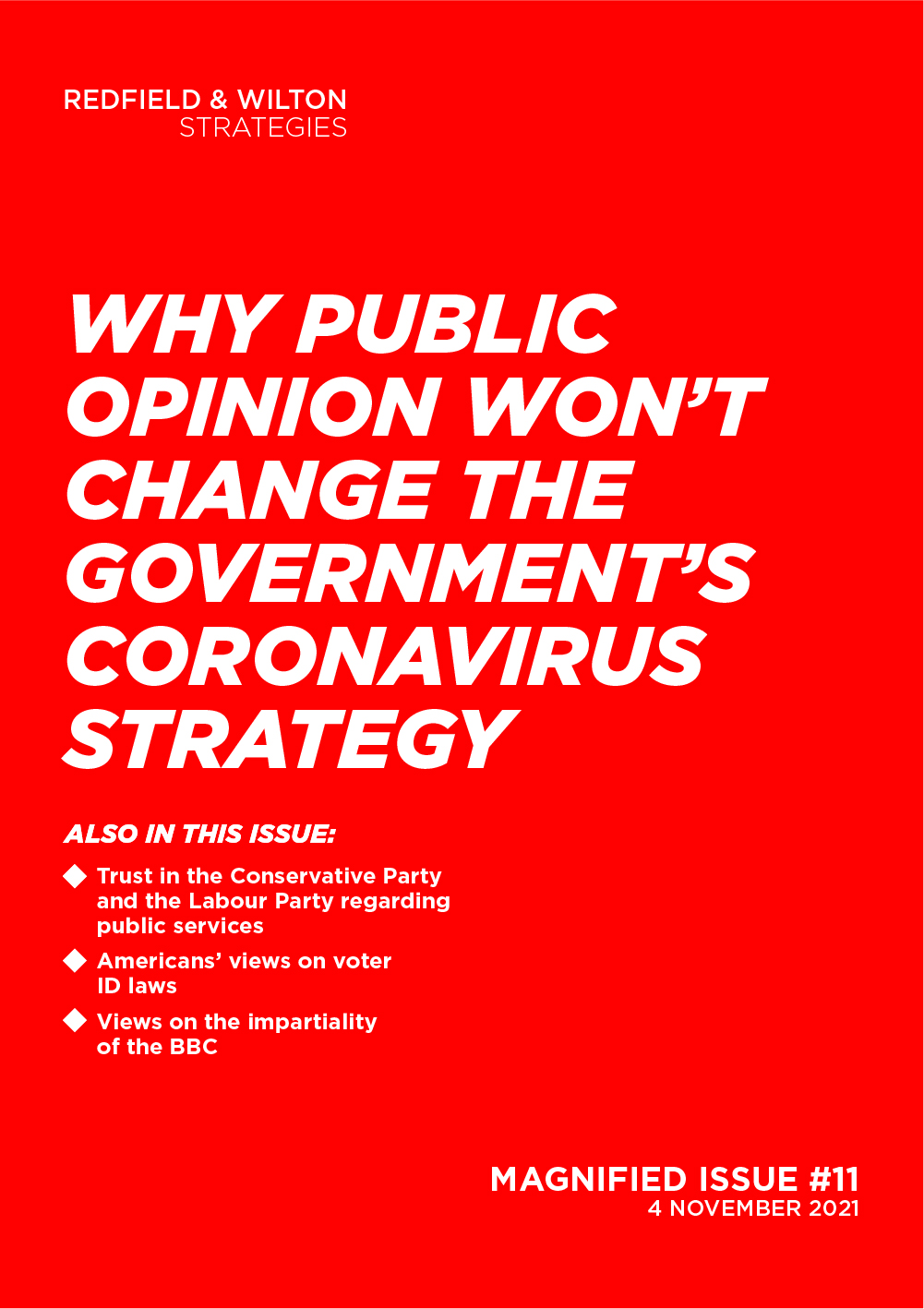 It’s time to take a look at the polls! Each week, Magnified delivers insights and analysis straight to your inbox, allowing you to stay up to date on what the public thinks about the most important issues of the day. Keep reading for the latest updates on our weekly trackers, as well as our national and international polls. Today, we also take an in-depth look at how public demand for Government action on the coronavirus pandemic squares up to Britons’ individual behaviour.

Our latest Voting Intention poll gives the Conservatives a five-point lead over Labour, with 40% (+1) of voters saying they would vote for the Conservative Party if an election were to be held tomorrow. This week’s poll finds the Government’s net competency rating at -12% (+1), while Prime Minister Boris Johnson’s net approval rating has declined somewhat to -6% (-3).

Chancellor of the Exchequer Rishi Sunak’s net approval rating, which now stands at +14% (-4), has also declined slightly following last week’s Budget—one that, with its plans for more spending on public services largely financed by tax rises, increases in Universal Credit for those in paid work, and an increase of the national living wage, is more reminiscent of budgets delivered by Gordon Brown than George Osborne, as the Institute for Fiscal Studies’ Director Paul Johnson remarks.

“An economy fit for a new age of optimism”—such was the tagline the Chancellor chose to accompany his outline of the Government’s tax and spending plans for the year ahead. The public, however, is in a different mood. While 31% of Britons say they are optimistic about the general direction in which the UK is heading, 41% say they are pessimistic, including 19% who are very pessimistic.

To be sure, optimism among 2019 Conservative voters and thus the Chancellor’s key target audience is significantly higher, at 51%. But the Chancellor nevertheless faces the challenge of making his overall promise of “an economy of higher wages, higher skills, and rising productivity of strong public services, vibrant communities, and safer streets” credible to majorities of Britons.

Above all, Sunak’s most recent budget is a clear attempt by the Conservatives to challenge Labour’s strong points head on. By claiming that the Conservatives are “the real party of public services,” the Chancellor and his Party are attempting to prevent Labour from reasserting itself nationally through its heretofore established policy areas.

The promise to make streets safer, by comparison, may be one of the easier ones to imbue with credibility: A plurality of Britons trust the Conservative Party more than the Labour Party to tackle crime (30% to 27%). This area, unlike others, is where Conservatives are playing to their traditional strengths. When it comes to the remaining aspects of Sunak’s vision, however, he is setting himself up for a formidable challenge.

If the Conservative Party succeeds in delivering improvements in these areas that are tangible to Britons, the Labour Party will find itself in an even tougher spot than it already does, with its political capital becoming more and more limited by a Government that, in its approach to spending and taxation, is decidedly taking on positions that Labour used to hold.

Charts of the Week

Opposition to voter ID laws is minimal among Republicans, with only 5% of 2020 Trump voters saying they would oppose their introduction. Among 2020 Biden voters, on the other hand, opposition rises to 22%.

Looking towards next year’s Midterm Elections, making stricter voter ID laws part of their platforms thus will be a key promise for Republican candidates, especially as election integrity remains a major issue for their voters. For Democratic candidates, the issue is not quite as straightforward but may still represent an opportunity rather than a threat. Given that support is strong among right-leaning voters and support outnumbers opposition among left-leaning ones, the Democratic Party could adopt a pro-voter ID stance and show that they are equally serious about the issue of election integrity with a view towards negating this motivating issue for Republican voters and appealing towards middle-of-the-road voters.

Great Britain: Despite the general trend of increased online shopping—which has been further accelerated by the pandemic—Britons continue to prefer making high-value purchases in person. Among those who have made a purchase exceeding a value of £1,000 in the past week, nearly half (48%) made said purchase in person, while 34% made it online and 12% over the telephone.

United States: When Americans are asked which party they trust most on the environment, 78% of 2020 Joe Biden voters select the Democratic Party, whereas a still significant but noticeably lower 58% of 2020 Donald Trump voters select the Republican Party—perhaps suggesting doubts among a proportion of Republican voters in the ability of their preferred party to effectively deal with environmental issues.

Coronavirus Restrictions: Why Current Disapproval of the Government’s Handling of the Pandemic Is Not Enough to Make the Government Change Course

In late October, daily coronavirus cases rose above 50,000 in the UK for the first time since July. While recognising that infections were high, Prime Minister Boris Johnson maintained that cases remained within the parameters of what was predicted. Health Secretary Sajid Javid echoed this assessment and warned daily cases could potentially even reach 100,000 over the coming months. Amidst this latest development, the Government unitedly rejected calls for coronavirus restrictions to be re-introduced.

The Government’s decision to stick with plan A—that is, to rely on high vaccination rates and booster shots to keep cases, hospitalisations, and deaths under control over the autumn and winter months—has not gone uncriticised. The British Medical Association, for instance, described the Government’s inaction at this point in time as “wilfully negligent,” and the Scientific Advisory Group for Emergencies (SAGE) highlighted that “earlier intervention would reduce the need for more stringent, disruptive, and longer-lasting measures.”

Such warnings may be striking a chord with the British public. As we noted in last week’s issue of Magnified, there has been a considerable increase in the number of Britons who think the Government is not taking the right measures to address the pandemic. At the moment, 46% adopt this view, compared to 38% who think the Government is taking the right measures and 16% who don’t know.

The emergence of the Delta variant caused a short-term panic, leading to a temporary spike in negative views of the Government’s actions that then reversed when it became clear that hospitalisations would not rise as dramatically as seen in the winter surge. The latest rise in negative views—which may already be lessening again—may be reflective of a similar short-term panic in the face of rising case numbers.

Nevertheless, dissatisfaction with the Government’s measures regarding the pandemic currently remains high, and Boris Johnson’s approval ratings have remained negative since the earlier surge in cases this summer, suggesting, on the surface, that a significant proportion of Britons want the Government to act differently and re-introduce coronavirus restrictions. Compared to the 47% who say the current approach is about right and the 9% who say it is too strict, a sizable 44% say the current approach to the coronavirus pandemic is too relaxed. Such individuals may prefer the Government’s “Plan B,” for instance, which would involve vaccine passports, compulsory face mask wearing, and increased working from home again.

In the meantime, many Britons have returned to a more familiar way of life. Even without the active use of vaccine passports, for example, majorities already say they feel safe eating at a restaurant or drinking at a pub inside (58%) or doing so outside (68%). Strong majorities further feel safe engaging in other activities of daily life, such as food shopping (74%), going to work (63%), and visiting a friend’s house (63%).

There thus appears to be somewhat of a mismatch between Britons’ calls for Government action and their behaviour at an individual level. The Government not re-introducing social distancing measures, for instance, does not preclude individuals from taking such measures on their own accord. Yet, as feelings of safety demonstrate, majorities feel no such need for taking stronger protective measures at an individual level, be it wearing masks more often or avoiding crowded indoor locations such as restaurants or pubs.

Simply put, coronavirus vaccines have (rightfully) removed fear of coronavirus for a substantial proportion the public. With Britons having lived with the pandemic for the better part of two years now, there is also only so much energy and attention people can devote to actively feeling anxious on the back of this vaccine success. Britons do not deny the potential threat coronavirus poses, as is visible from their willingness to support stricter measures if if the Government deems such measures necessary. But the pandemic has also lost some of its urgency for Britons, as is clearly visible from their behaviour in practice. If hospitalisations remain relatively low (as we all hope!), the Government’s coronavirus approach will have the broad support of the public even as cases rise.

Our take: In a move intended to challenge claims of bias, the BBC has published a 10-point Impartiality and Editorial Standards action plan that includes regular reviews of content, increased transparency, and a new editorial whistleblowing policy. According to the BBC’s Director General Tim Davie, this new plan—which has been informed by a review into the BBC’s editorial processes—aims to safeguard the BBC’s editorial values of impartiality and accuracy. The need for Britain’s public broadcaster to act is reflected in public opinion: While 43% of Britons think the BBC has succeeded at being impartial in the past year, a similar proportion of 39% think it has failed—resulting in mixed evaluations of the BBC’s performance regarding the mission of television news broadcasters to be impartial. Even so, overall opinions on the BBC remain more positive than negative, as 38% of Britons have a favourable view of the public broadcaster, compared to 29% who have an unfavourable view and 30% who are neutral.

Our take: New research published in the Proceedings of the National Academy of Sciences of the United States of America suggests that by 2070, 3bn out of the world’s projected 9bn population could be exposed to temperatures on par with the hottest parts of the Sahara. The latest research highlights that while currently, only 0.8% of the planet’s land surface area experiences mean annual temperatures greater than 29°C, this proportion could rise to 19% under the worst-case scenario for climate change set out by the UN’s Intergovernmental Panel on Climate Change. It appears as many as 1 and 4 Britons take such predictions seriously: 25% of those polled now think that a rise in global average temperatures to 2°C above pre-industrial levels would make Earth uninhabitable for humans, and a further sizable 34% say they don’t know. 41% meanwhile say they do not believe this claim.

Building on Greenbelt Land is Still Politically Toxic, Despite the Severity of the Housing Crisis
21 October 2021 (4 min read)