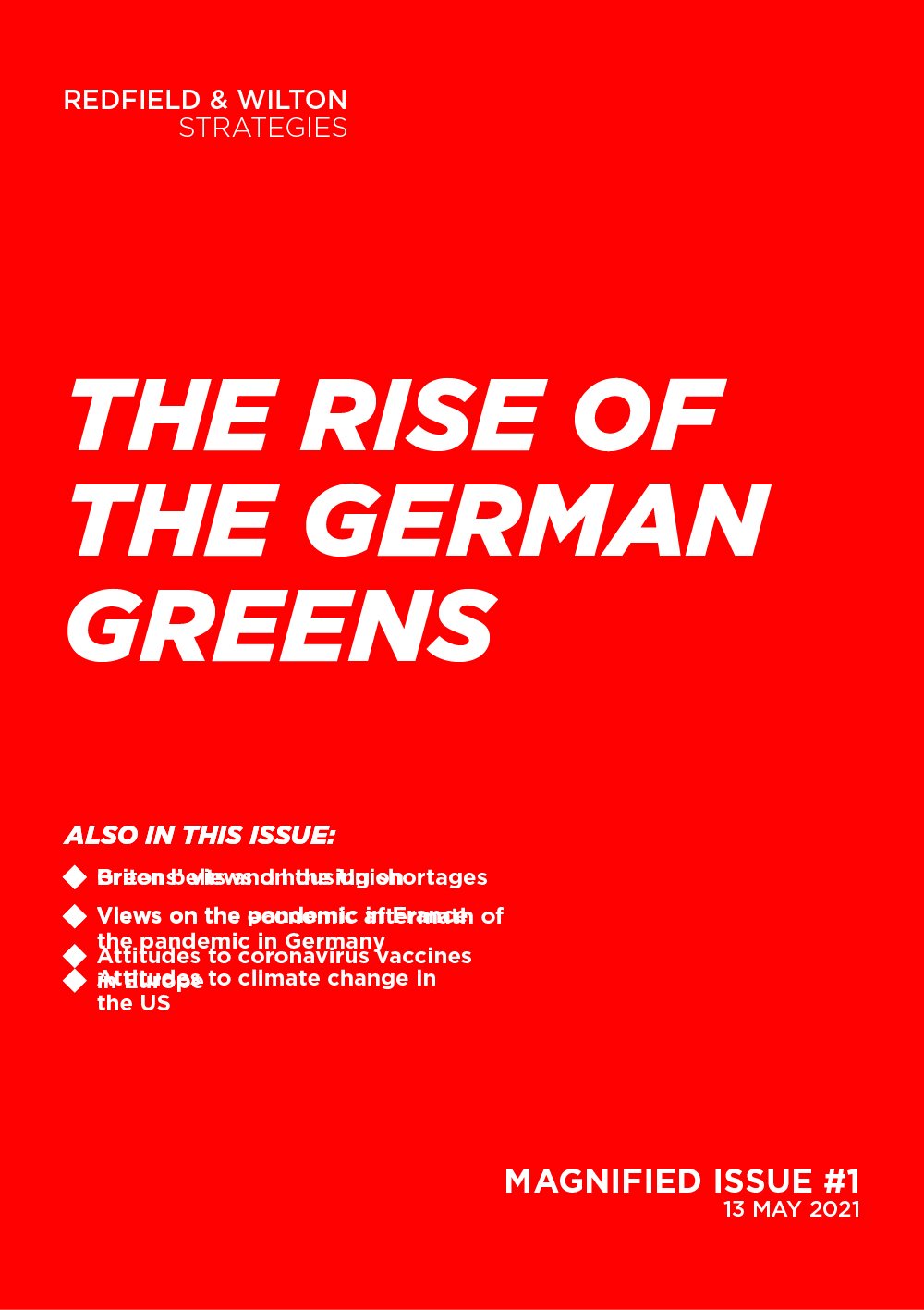 It’s time to take a look at the polls! Each week, Magnified delivers insights and analysis straight to your inbox, allowing you to stay up to date on what the public think about the most important issues of the day. Keep reading for the latest updates on our weekly trackers, as well as our national and international polls—this week, we take an in-depth look at the Green Party in Germany and explore the factors that contribute to its recent surge in the polls.

All Net Approval Ratings
(10 May):

Mirroring gains made in local elections across England, our latest GB Voting Intention polls finds the Conservatives widening their lead to 45%—up 5 points compared to last week. So far, it appears that stories on Tory sleaze, which we wrote about here, have not yet had a negative impact on peoples’ likelihood to vote Conservative if a General Election were to be held in the near future.

On the contrary—Boris Johnson’s net approval rating is positive for the fourteenth week in a row. With the vaccination rollout and the progressive loosening of lockdown restrictions across England going ahead as planned, the Prime Minister’s handling of the coronavirus crisis is likely an important factor explaining this level of public satisfaction.

Labour, on the other hand, see their share of the vote drop to 34% (-4) in our poll—giving the Tories an 11-point lead overall. Labour’s loss of a Westminster seat to the Tories in the Hartlepool by-election might not have come as a significant surprise but is dramatic nonetheless: The latest set of elections marked the first test of voter opinion on Keir Starmer since he became party leader last year and would have been a chance for a reset—but things are looking far from rosy.

In fact, at -7% (-6), we register Keir Starmer’s lowest net approval rating since he assumed his leadership role. Mixed messages of Starmer wanting to take “full responsibility” for Labour’s election results while also sacking deputy Angela Rayner from her role as chairman and national campaign coordinator make for a Labour PR nightmare. If anything, this lack of clarity is likely to lay Keir Starmer open to attack, both from outside and from within his own Party, and is hardly likely to improve voter confidence.

France: 44% of French respondents think the worst of the coronavirus pandemic is yet to come, whereas only 18% of Britons adopt this pessimistic view. Read more about the French public’s attitude to the pandemic here.

Questions Of Sustainability: Can The Hype Around The German Green Party Last?

After years of being stuck in a slumber, German politics are suddenly shaping up to be interesting again. With Angela Merkel set to step down from the political stage and Federal Elections scheduled for 26 September, the race for her succession is open—and our latest voting intention research conducted in Germany finds the Christian Democratic Union (CDU)/Christian Social Union (CSU) virtually tied with Alliance 90/The Greens, with 22% of Germans saying they will vote for the CDU/CSU and 21% saying they will vote for Alliance 90/The Greens. To put this into context: In 2017, the Greens entered the Bundestag as the smallest parliamentary group, with 8.9% of votes. Today, we take a look at what drives this wave of enthusiasm surrounding the Green Party to assess whether this hype is sustainable or not.

At its core, the rise of the Greens is the symptom of a society divided: The Greens provide an ideological rallying point for those who define themselves in antithesis to the anti-liberal views of Germany’s new far-right AfD (Alternative for Germany). Germany’s two biggest traditional parties fail to do this to the same extent: For the conservative CDU/CSU, internal conflict on how far to the right the party should go in its attempt to reach the most moderate AfD voters causes doubts among centrist voters, and where the social-democratic SPD is concerned, years of grand coalitions with the CDU/CSU have watered down the party’s image to such an extent that many voters struggle to know what the SPD, on its own, stands for anymore.

Moreover, the Greens are open to all sides. Since its first participation in a governing coalition at the federal level in 1998 with the SPD, the party has not been shy to experiment. They currently co-govern eleven of Germany’s sixteen states in a multitude of different coalitions, which has allowed them to gain crucial governing experience and foment their image as pragmatic, rather than dogmatic. This willingness to work with a variety of partners—with the explicit exception of the AfD—further increases the likelihood that the next German government will be tinted green.

In addition, with issues such as environmental protection and climate change now firmly established on the agenda of mainstream politics in Germany, the Party benefits from the high degree of credibility it enjoys in this issue area—we are talking about the Greens, after all. With our latest research showing that 55% of Germans perceive climate change as a direct threat to the country, the Greens capture the zeitgeist of 2020s Germany like no other party—which translates into further gains in the polls.

Lastly, the Green Party symbolises change—for which there is demand in a country in which the political memory of an entire generation of young voters does not extend beyond the ‘era Merkel’, there is demand for change (in fact, 41% of Germans are in favour of instituting a two-term limit for the office of Chancellor). The Green party can capitalise on this demand: our research shows that voters are most likely to associate Green candidate for Chancellor Annalena Baerbock with the quality of representing change, with other parties’ candidates trailing far behind. Over the longer term, the real challenge here will be for the Party to prove its ability to reconcile different social demands and to also address the concerns of groups beyond its mainly left-leaning liberal, urban, pro-European base.

For the time being, the Green Party and their candidate for Chancellor, Annalena Baerbock, are riding high in the polls as a result of these confluence of all these factors. To the extent that none of these factors are particularly temporary in nature, we are inclined to think that the hype around the Green Party is relatively sustainable. But of course, much can happen between now and September.

What is certain is that we will keep an eye on how public opinion evolves – and as a subscriber to our insights email, you will be the first to get exclusive access to our analytical take on future developments in this regard.

Perspective: The RWS Take On The News

The Economist: “Future of the Union: From United Kingdom to Untied Kingdom”

London Playbook: Hart in your mouth — Spin when you’re winning — EasyJab
Politico | 4 May 2021

Would the British public support or oppose more nuclear power stations being built in the UK? (see full tweet)

Would the British public support or oppose a ‘frequent flyer tax,’ whereby for every flight a person takes, the amount of tax they pay on their next flight increases? (see full tweet)

Britons trust the Conservative Party the most to… (see full tweet)